Adventures of Thunderstorm: The Return of Thor (2011) 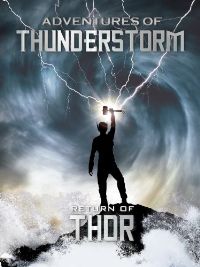 A quick look at Canadian director Brett Kelly’s resume reveals such gems as Avenging Force: The Scarab, Jurassic Shark, Agent Beetle, and even a remake of that old chestnut Attack of the Giant Leeches. In other words, bottom of the barrel nonsense on shoestring budgets. So I guess it shouldn’t be a surprise that Adventures of Thunderstorm: Return of Thor

is bad, but I was surprised at how uniquely bad it is. It’s the kind of bad that actually has you wondering whether the movie is just one big joke, ineptly made on purpose (I figure that the production company – “Dudez Productions” – gets some kind of funding from the Canadian government, kinda like Cronenberg’s early films, but please don’t compare Kelly with Cronenberg… just.. don’t). Or maybe he’s not quite aware that it’s bad; maybe he earnestly is trying to make the best film he can. In which case: Yikes.

We know we are already in trouble at the beginning, when wave after wave of credits unfold in that Star Wars

tradition, telling us about gods and Asgard and something called Ragnarok which will be brought about by a cult of humans who worship evil. These humans were driven underground but not defeated. Unfortunately, mankind had a falling out with the gods, so they can never directly interfere in the events of Earth, aka Midgard. This wall of text goes on for 3 minutes, with a narrator speaking them because remember – these kinds of films are made for those who can’t read. It rivals the opening credits roll in Uwe Boll’s Alone in the Dark. After the opening titles and cast/crew listing (which takes place over some kind of screensaver), we see amateurish, slow motion shots of dudes getting out of a car and walking towards the camera, brandishing weapons. This seems to go on forever – not a good sign. We are soon introduced to Evan (Jody Haucke), who bursts into a museum (actually, just some kind of corner office) looking for an artifact called the “Dragon’s Cross.” He is supposed to be menacing in that Anton LaVey-way, but he looks more like that one weird guy from your high school drama class (you know, the one who’s way more into it than anyone else), and he’s about as threatening to boot. But the lines he delivers, and the way he delivers them are nothing short of hilarious.

You get the idea. Then we are transported to “Asgard”, which for some reason looks nothing like the Asgard of Marvel’s Thor

movie. No, this Asgard looks like graphics from Castle Wolfenstein backed by streaks of purple light. Realistic, it isn’t. We witness a conversation between Thor and his dad (who kinda looks like John de Lancie). But we aren’t looking at two people speaking. We are looking at photographs superimposed over streaks of light, and the photos are made to shake back and forth while we hear narration between two horrible actors. At this point you may have noticed that the cheesy musical score practically drowns out all dialogue. Get used to it. It’s almost as if you are actually there.

Now things get dumber. We are introduced to the movie’s “hero” – one Grant Farrel (Ray Besharah) who, along with his buddy Earl (Randy Kimmett) works on a super secret project to make a weaponized suit. Their laboratory is basically a closet with some red lighting and a computer. As for the “battle suit”, it looks like something stolen off a cosplaying guest at MegaCon. (Think of the silliest Batman suit merged with a stormtrooper’s uniform.) And yet our guys refer to it as a “kick-ass battlesuit.” How cute! Oh, the suit also comes with an accessory “battle staff” with insulated electronics. Farrel comments that “it looks like a hammer if you ask me!” Ha ha! By the way, I must mention again that this suit is a military prototype and absolutely not a costume picked up at the Spirit Halloween store in Ontario for $49.95.

Meanwhile, a college girl named Susan Green (Emanuelle Carriere) is abducted by the cult, which intends to use her as a vessel to bring back an evil being called “Hel” (played by Gabrielle Mackenzie, AKA Karin Landstad, hamming it up even more than Jody Haucke, if that’s even possible). The gods finally call upon Grant to take her and the cult on. Given a gift of cheesy lightning effects coming out of his hands, Earl gets the idea to put Grant in the suit. So now Grant Farrel is a reluctant super hero called Thunderstorm! Think of Iron Man

mixed with Thor. OK, now take away Tony Stark’s personality and smarts while removing Thor’s strength and bravery. Add a wisecracking, awkward Canadian sidekick. There, now you’ve got Adventures of Thunderstorm: The Return of Thor.

There’s a sequence where Grant trains himself, which is basically scenes of the camera lingering on bad graphics while Earl stares intensely and writes shit down in his notepad. What can he do with this power? Level buildings? Fly? How about… cook a hot dog! Now that’s a useful power, eh? Oh, there’s also a heroine called Detective Bronski (Celine Filion – not Celine Dion) who catches up with Grant. There’s a funny bit where the bad guys get away (stealing Grant’s hammer) but the detective says to Grant (while he’s wearing his battle suit) “You’re coming in for questioning.” Grant – who, remember, is now a super hero with the power of Thor – says “Which way?” Wow, he’s such a good super hero that he willingly goes to the police station!

The cackling Hel and her gang pay a visit to Earl and leave him for dead, but for some reason they leave the hammer there. Why bother to handicap our superhero in the first place if they were just gonna return it? In the meantime, Grant convinces Bronski to help him, although at this point I am wondering if Thor perhaps chose the wrong human. His only power seems to be that he shoots bolts (which miss their targets). He doesn’t fly, but he does drive pretty well (and his choice of electric car is very environment-friendly). He stumbles upon a dying Earl, who says “there was this lady… she looked like a renaissance fair reject…” which is a line that has me stumped because – does this prove that Brett Kelly is in on the joke, or not?

The ending proves just as stupid as everything else. Hel resurrects her “brother” who appears in the form of (a very horribly rendered) dragon. The Desolation of the Audience

There’s scenes of Grant/Thunderstorm shooting at (and missing) the funny CGI dragon/screensaver thing intercut with a horribly-choreographed kung-fu battle between Celine Filion and Jody Haucke. To paraphrase MST3K, people compare this fight with the one between Neo and Smith in The Matrix

. Yeah, you know, they say: “The Matrix was really good. This movie totally sucks.”

And how does Grant defeat the powers of Hel the Renaissance fair reject? Spoiler alert! He grabs the dragon’s cross out of her hands and… throws it on the floor! The cross goes poof, the dragon goes poof, and Gabrielle Mackenzie screams “No No No!” before she goes poof.

Wow, really? That’s how evil is defeated? Anyhow, Grant is transported to Asgard and Odin congratulates him. Oh, does this remind anybody of that crappy TV series Shazam? Remember that one… where Billy the kid is talked to by Hannah Barbera versions of the gods? Well Thunderstorm: Return of Thor is about on par with that (except without that creepy mentor guy). Some funny bits of dialogue in this very Canadian production:

Adventures of Thunderstorm: Return of Thor has it all: silly dialogue (constantly drowned out by a cheesy musical soundtrack), bad fight scenes, bad acting / over-acting all around, laughable “special” effects, a stupid looking suit/costume in the style of Mighty Morphin Power Rangers, a distinct lack of sets, goofy use of slow-mo, ambient sound that makes it seem like the audio was recorded in a bathroom somewhere (yeah, the budget didn’t allow for ADR), and, uh, lots of shots of Ontario warehouses and office buildings.

The important question now is: Is Thunderstorm: Return of Thor at least better than Shazam!

? I don’t know, but to even arrive at a point where such a comparison must be made should tell you something about this zero-budget film. The good news, I think, is that I may have found the modern Canadian Ed Wood, and the cinematic dung heap of terrible movies has grown even larger, which means there’s plenty of fresh fodder for reviews. Plan 9

Buy Adventures of Thunderstorm: Return of Thor on DVD You! Have been chosen to drive us to Ren-Fest! Brett, honey, please stop playing with your toys and get to bed!