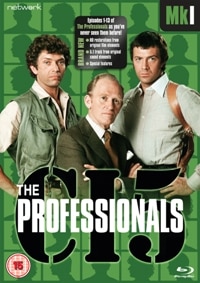 Clocking up 57 action-packed episodes between 1977 and 1983, The Professionals was a firm favourite of boys of all ages and a lot of women too, given the hunky leads. The plots might have been simple and predictable, but you were never more than about a minute away from a massive punchup/shootout/car chase with a Ford Capri crashing into a mountain of cardboard boxes.

This classic testosterone fuelled series chronicled the cheerfully misogynist lives of thuggish William Bodie (Lewis Collins) and his slightly more compassionate oppo Ray Doyle (Martin Shaw). As a simple reference, one’s the SAS man; the other’s got the girl’s hair. It can get confusing though, because Bodie seems to run like a girl.

If you’re a fan you’ll already know their call signals – Bodie is 3.7, and Doyle is 4.5. And as top agents for Britain’s CI5 (Criminal Intelligence 5), Bonehead and Foyle are licensed to park on double yellow lines, run through puddles and beat up anyone they want as long as it’s in the cause of national security or getting a tasty bird’s phone number.

These guys are only scared of one person, their gruff and formidable ex-MI5 Scottish boss George Cowley (Gordon Jackson), who they call ‘The Cow’ – but never to his face or they’d be at risk of wearing their balls for earrings.

Among the more far-fetched problems that the boys had to deal with was saving Britain from a nuclear bomb in a bowling alley in Hemel Hempstead. But it also tackled the issues of the day in a grimly realistic fashion, as in the episode where the lads were sent to sort out a whole town full of bent coppers – bent on persecuting a bunch of gays – though I believe they have a more old-fashioned word for them.

This episode has one of my favourite lily-livered liberal lines, delivered by the guy who comes to ask CI5’s help: “Mr Cowley, I’m the secretary of the National Gay Youth Organisation. I’m not a homosexual myself, but many of my friends are.” Although he is wearing a pink shirt, so in 70s TV code that suggests he’s maybe bending the truth a little.

As we can see, the show never shied away from controversy, but the brown stuff really hit the air conditioning at CI5 headquarters with a first season episode called Klansmen, where our heroes set out to put the black on a British Ku Klux Klan. Even in the racist, sexist 70s where Gary Glitter was dominating the charts and Jimmy Savile making children’s dreams come true, this proved too much for the TV authorities and the episode was withdrawn.

It has never been screened on terrestrial television here since, but you can catch it in full high definition on Network’s recently released Professionals Blu-ray – but only if you want a good laugh and aren’t too sensitive about bad handling of racial issues!

Klansmen is about a KKK-type fascist organisation called The Empire Society, whose members include Tony Blair’s father in law. You can’t have burning crosses outside suburban semis, so CI5 are sent in to sort them out, but there’s an unexpected problem. It turns out Bodie is a racist. We always knew he liked to call a spade a spade, but this is taking it too far. Even when Bodie gets stabbed and finds himself in the care of a black doctor and a black nurse, it still doesn’t stop him making racist comments!

However, in a shock revelation it turns out that the guy behind the British KKK is black himself, and has been using the organisation as a front to grab property from poor black folks to develop and sell off at a much higher price – so he’s a capitalist not a racist, hoorah!

Finally, when Doyle visits Bodie at the hospital in company with token black CI5 agent Jax, he discovers his pal fully recovered and leaving with his arm round the sexy black nurse. Yes, Bodie has seen the error of his racist ways, and consequently he’s pulled. All’s well with the world, or is it?

Doyle turns to his companion and says:  “Okay Jax this calls for a large drink, then we start our campaign.”

“Yeah.” Chuckles Doyle. “How to get rid of some of those damn whites!”