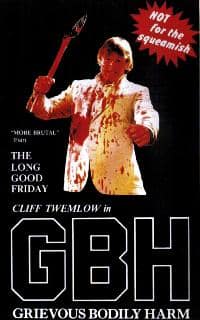 As all you dodgy geezers out there will know, GBH stands for Grievous Bodily Harm, the British legal term for what you get sent down for if you give somebody a serious enough pasting to leave them sucking hospital food through a straw. The makers of this seriously awful British crime thriller serve up plenty of punishment too, with another of those no-budget camcorder (if they had had camcorders back then!) classics that didn’t so much get released on video as escape on parole.

The opening scene sets the tawdry tone nicely. Things are hopping down at the Rainbow Club, a trendy 70s Manchester night spot that looks for all the world like the interior of a British Legion hut. While two or three John Travolta wannabes go through a Pan’s People dance routine, a bunch of heavies are beating the doorman to a pulp, giving him a swift kick in the goolies for good measure. Then one of the baddies lets loose a shotgun on the dance floor, causing the gormless dancers to shake in their platform shoes.

Behind this terrifying low-budget attack is Keller, a Jewish crime boss played by real-life stand-up comic Jerry Harris. Keller wants to take over the Manchester club scene, and now he’s putting the frighteners on Murray (Anthony Schaeffer), a plastic gangster who runs a low-tech night spot called The Zoo. But Murray has an ace up his sleeve in the beefy shape of Steve Donovan (Cliff Twemlow), a Mancunian hardcase who looks like he shaves with a blowtorch and eats broken glass for breakfast…

Donovan has just got out of prison after doing six months of porridge for GBH, a sentence he incurred sorting out Murray’s earlier problems. He’s not keen to get back into the same scenario, but is persuaded to help by his mate Chris (Brett Sinclair – hey, wasn’t he in The Persuaders?), who works as a barman for Murray. Before long the heavy mob arrive on the scene and bodies go flying in all directions as Donovan starts to earn his pay. Realising that there’s no way they can handle such a tough character on a simple ten against one basis, the nasties devise a cunning plan to catch him unawares and murder him. The final shootout leaves bodies everywhere – including Donovan’s!

As played in a somewhat awkward fashion by the deservedly unknown Cliff Twemlow, Steve Donovan is not much of a New Man. When a saucy blonde waitress suggests he might be getting too old for the job, he roughly shoves her into a toilet cubicle and shags her. Of course she loves it, well, all women do, don’t they?

Afterwards he confides to his buddy Chris that he doesn’t understand the female mind at all: “Bleeding women…” he laments. “No wonder there are so many queers.” He does, however, embark upon an affair with the remarkably unattractive Tracy (Jane Cunliffe), a girl who looks like she’s been doodled by a lunatic. Their slow-mo love scenes set to a Tony Christie-type ballad are more sickening than any of the violent bits, and frankly one can see more genuine mileage in Donovan’s almost homo-erotic relationship with Chris!

It’s Chris getting glassed in the face by a couple of thugs that is the catalyst for the film’s most violent sequence. When Donovan finds the guys who did it he literally makes mincemeat of them, sticking a broken bottle into one guy’s testicles and nailing the other’s hand to the bar with a jagged splinter of glass.

The movie’s slim storyline (by Twemlow himself, who also produced) doesn’t really stretch to the full running time, so director David Kent-Watson pads it out with a tour of Manchester night spots and endless upskirt shots of bored-looking dancers. The fights themselves are quite well staged, though, with the stunt men putting in far more professional performances than the actors. Only the exaggerated mini-explosions on the soundtrack that pass for punching noises detract from their realism.

Finishing with a ham-fisted, but blood-squib-filled shootout on the streets of Manchester and a fadeout borrowed from Butch Cassidy And The Sundance Kid, GBH is endearingly bad entertainment, like an episode of The Sweeney written and directed by a bunch of schoolkids. I wouldn’t dare slag it off completely, just in case Cliff Twemlow’s still out there and decides to come round and thump me!