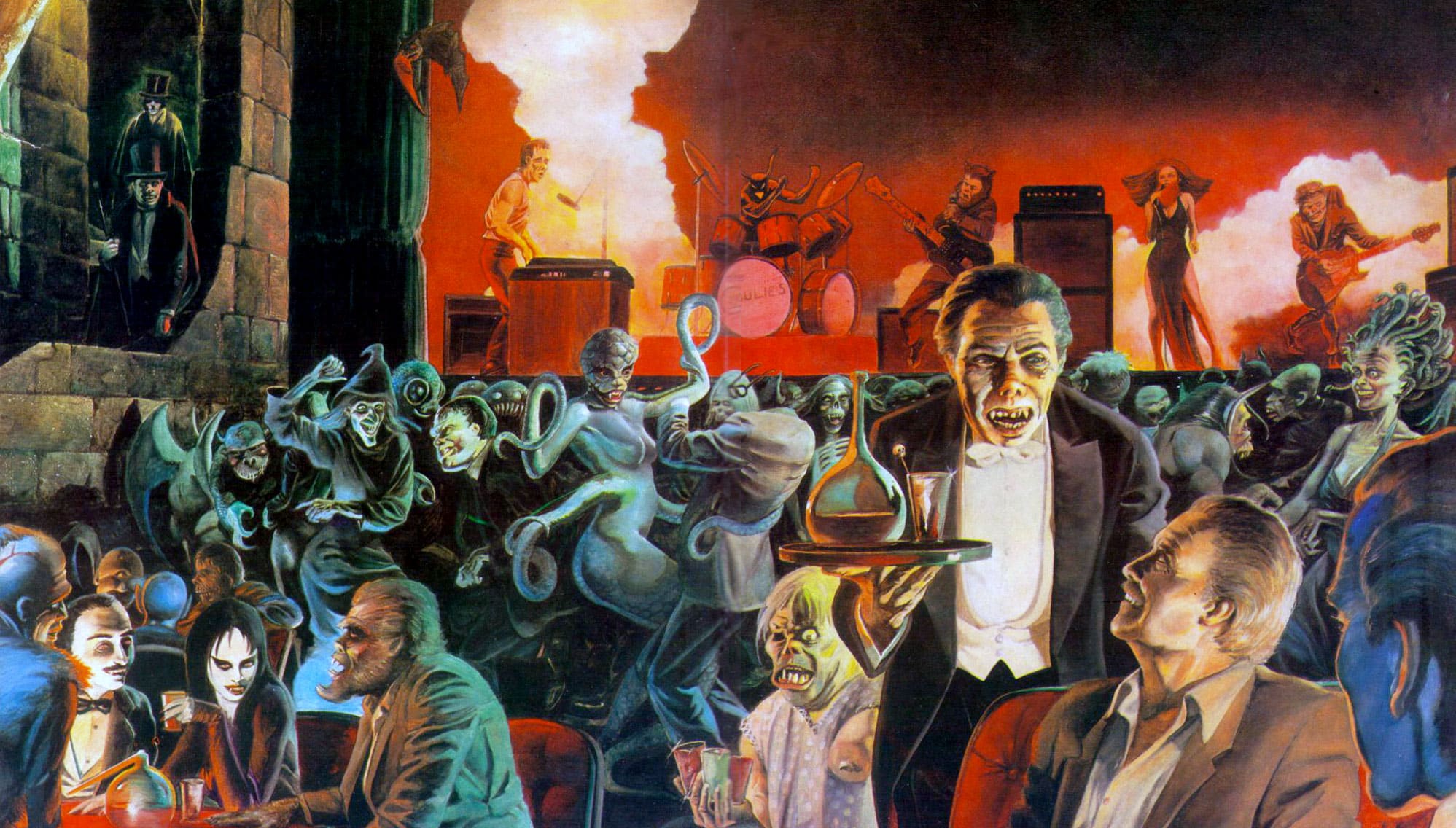 American producer Milton Subotsky was one of the men behind Amicus Productions, Hammer’s chief rival in the UK horror market in the 60s and 70s. While Hammer had their Frankenstein and Dracula series, Amicus specialised in the omnibus horror format, scoring their biggest hits with films like Dr. Terror’s House of Horrors (1965) and Tales From The Crypt (1972).

Unable to compete with the new style of Exorcist and Omen-type horror productions coming out of Hollywood, Amicus finally went to the wall in the late 70s, but Milton couldn’t accept the inevitable and formed a new production company to make yet another old fashioned compendium chiller, a disappointing comic book effort called The Monster Club.

Based on a collection of short stories by British horror novelist Ronald Chetwynd-Hayes, The Monster Club also marked Vincent Price’s return to acting after a five-year break, and he more or less chucked it in altogether after this embarrassing effort.

In his first ever feature film role as a vampire, Vinnie sinks his fangs into horror story writer Ronald Chetwynd-Hayes, played by an ancient looking John Carradine. When he realises who is victim is, he apologises and by way of compensation takes him along to the wacky establishment of the title, where the on-stage burlesque act strips down to a skeleton. This, like the sight of Vinnie and an arthritis-ridden Carradine getting footloose on the dance floor to bad rock music, is not easily forgotten. The Monster Club itself is just plain awful. Imagine the tackiest set you ever saw on Top of the Pops in the 70s and that doesn’t even come close. The place is populated by all manner of monsters but this is no Mos Eisley Cantina set-up – they are just extras wearing obvious joke shop masks. Rumour has it that the masks were made by Milton Subotsky’s milkman to keep the budget down!

In the first of the trilogy of stories, Barbara Kellerman and her boyfriend Simon Ward are strapped for cash, so she takes a job cataloguing antiques in an old manor for kindly James Laurenson, little realising he is a Shadmock, a monster whose silent whistle is fatal to humans.

Angela is hot stuff and well worth a whistle, but her soft-spoken employer doesn’t try it on. He does fall for her in a big way though, and when he asks her to marry him Ward persuades Kellerman to play along, with a view to absconding with his loot. They both have to whistle for it at the end. It’s an extremely tedious tale despite good performances.

Story two goes for cheap laughs and fails in a poorly written tale about a “Vamp Squad” of bloodsucker-hunting detectives led by Donald Pleasence. They are on the trail of a vampire (Richard Johnson) who has been stalking the London underground without an Oyster card, but when Pleasence finally tracks him down he gets turned into a vampire himself. Much supposed merriment ensues as his own team try to put a stake through his heart.

The vampiric Johnson appears to fall victim to the vampire hunters himself, but in the jolly finale he pulls the stake out, declaring: “I was wearing my stake-proof vest – and look – tomato ketchup!”

The third segment concerns a village populated by “Humgoos”, flesh-eating ghouls who attempt to put the bite on movie director Stuart Whitman when he drops in on the place scouting locations for his next horror flick. It’s hard to accept a mysterious ‘lost’ village would be just a mile or so off a main motorway, but at least this is an atmospheric yarn with a fairly neat finish.

Author Chetwynd Hayes was greatly disappointed in the end result and lamented: “I thought the so-called humour in the film was down-right silly. The only horror was the really horrible pop music they inserted into it.”

He has a point there. The naff, extremely 80s musical performances are delivered onstage by the likes of B.A. Robertson, UB40 and The Pretty Things, who belt out the title song:

“I was necking with my ghoulfriend when she just snapped out the light,

Saying ‘Thanks for the memory’ as she took a bigger bite.

Welcome to the Monster Club!”

Genre buffs will find plenty of Amicus in-jokes here, though none of them are actually funny. For example, the second story features a vampire film producer named Lintom Busotsky. Geddit? Producer John Dark made the Amicus compendium From Beyond The Grave, and there’s a scene involving a screening of From Beyond The Tombstone, co-produced by Dark John. Geddit? Forgeddit!

Released in 1981, The Monster Club bombed, the critics tearing it’s genteel pace and rubber monster masks to pieces. Is it ripe for revival? Network think so because they are about to release it on Blu-ray, meaning you’ll be able to see all those rubber masks in high definition and listen to all the awful songs in full surround sound. Ain’t progress marvellous?