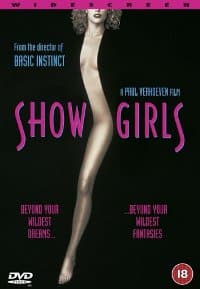 It’s never a surprise when a bad director makes a bad movie, but it is when a really talented filmmaker serves up a prime, corn-fed turkey. Then the critics just can’t wait to get their knives out and carve off a slice. It happened to Steven Spielberg with 1941 and it happened to Paul Verhoeven with Showgirls.

We’ll probably get around to taking a few potshots at Spielberg’s bloated war comedy in a later post. Right now, let’s concentrate on the most hyped movie of 1995, Hollywood’s first attempt at mass-marketing a big budget sleazy soft-porn epic that would normally have been the exclusive entertainment of choice for the dirty raincoat crowd.

Dutch-born Verhoeven was of course responsible for a string of great movies such as RoboCop, Total Recall and Basic Instinct, the latter a massive box office hit combining bloody violence and strong sex scenes. So the powers-that-be shoved a big bundle of cash at Verhoeven and his Basic Instinct scribe Joe Eszterhas and told them to go and do it all over again, using some of the cash to buy Sharon Stone some spare panties  while they were at it. 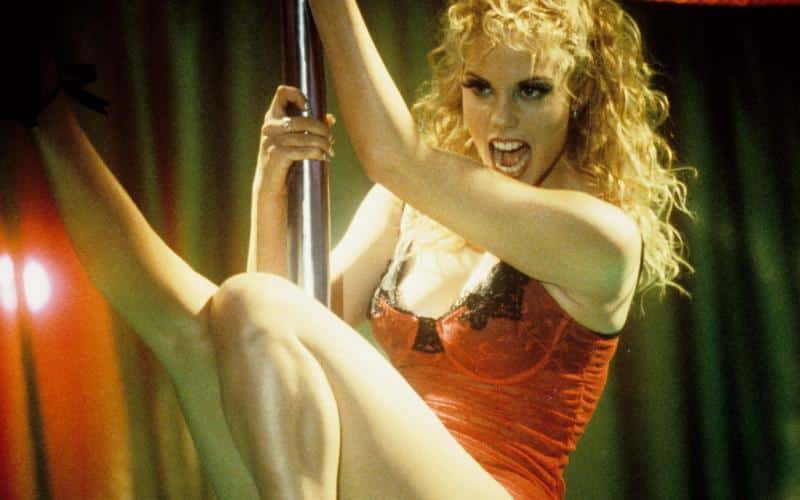 What they came up with was Showgirls, the trashy, absurd tale of how sexy young drifter Nomi (Elizabeth Berkley from TV’s Saved By The Bell) hitchhikes to Las Vegas determined to become a top showgirl. That’s right, her showbiz dream is to get her tits out night after night in only the best venues. The ones with central heating, one presumes.

But like central heating, fame costs, right? And after getting all her possessions pinched by an Elvis impersonator (who promptly leaves the building, the hound dog) she finds herself doing lapdances in a sleazy nightclub wearing not much more than false eyelashes to pay the rent. Her big break does come though, when she meets top hotel entertainment director Kyle MacLachlan, who greatly admires her twin peaks over a damn fine cup of coffee.

Before you know it she is clawing her way to the top of the slippery Vegas stripper ladder (by the simple expedient of pushing her main rival Gina Gershon down a flight of stairs). But she discovers that life as a showgirl is not as glamorous as they made it out to be on the movie’s poster. 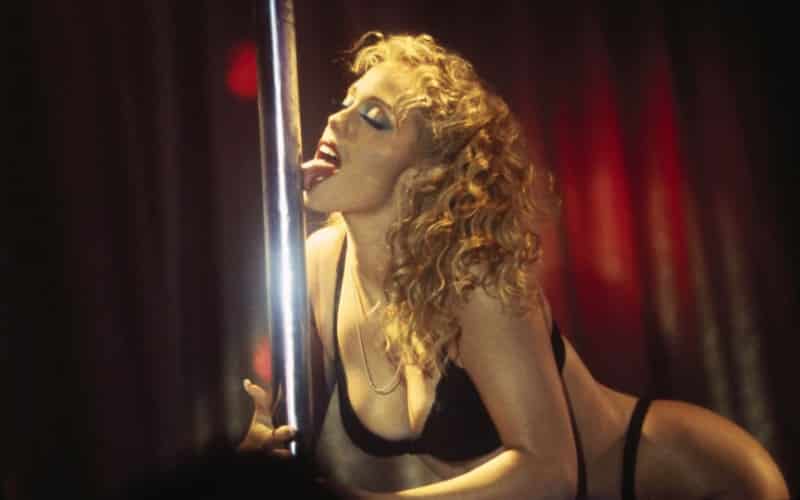 Berkley is a hot babe, no doubt about that, and this writer certainly wouldn’t kick her out of his bed for eating biscuits. Her performance is simply horrible though, wooden as Long John Silver’s leg and not half as useful. Her witless character is a total jerk who annoyingly spends the entire movie either giggling girlishly or ranting like a mad harpy, as if she’s suffering from some kind of bipolar disorder.

The oddest thing about Showgirls is that it contains wall-to-wall nudity and sex scenes but is not at all a sexy movie, It’s quite the opposite in fact, and may put you off sex in the same way as the stuff they did to cure Malcolm McDowell of his violent tendencies in A Clockwork Orange.

As with any classic bad movie, Showgirls still has its fans, some high profile ones too, such as Quentin Tarantino. It even turned a profit on its bloated $45 million budget eventually, thanks to the wonders of the home video market. Personally I wish they’d adhered to the old saying about what happens in Vegas and let it stay there instead of bringing it to the big screen. You’ve got to give Paul Verhoeven credit for one thing though – when his film swept the board at the 16th annual RAZZIEs, he became the first filmmaker to ever show up in person to receive his Award for Worst Director.