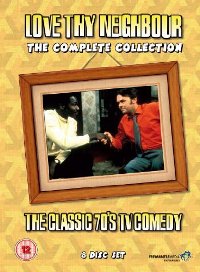 You can see endless reruns of most old TV comedy shows these days on channels like Gold and Dave, but conspicuous in its absence is Love Thy Neighbour. Made in the less enlightened days when PC meant friendly old Dixon of Dock Green, the aim of this lowbrow, working class sit-com was to poke fun at bigotry, and when it succeeded it was a hilarious guilty pleasure.

In the first episode, originally transmitted back in April 1972, Eddie goes round to welcome their new neighbours. Seeing a black guy and a white guy humping in a sofa he naturally assumes that the white guy is his new neighbour, not the removal man.

Of course Eddie gets the shock of his life when he discovers he’s now going to be living next door to a black couple, Bill and Barbie Reynolds (Rudolph Walker and Nina Baden-Semper). And as if it wasn’t bad enough Bill being black, it turns out he’s also a bloody Tory!

The show’s scriptwriters Vince Powell and Harry Driver were old hands at the sit-com game, having created such hit shows as George and the Dragon, Bless This House and For The Love of Ada. Their intention here was to show how ridiculous a thing racial prejudice was by getting people to laugh about it.

The timing was right for this and it proved a huge hit in an era when Britain was struggling to come to terms with its recently arrived population of black immigrants. At its peak the series was getting around 17 million viewers, who rolled about in their armchairs laughing when Eddie referred to Bill as “Sambo” or “King Kong,” and Bill called Eddie “Snowflake” and “White Honky”. Another favourite slur of Eddie’s was telling Bill to “Get back on the marmalade jar!” What a shame

One of the most successful episodes is the Series 2 show where Bill convinces Eddie he’s the victim of a voodoo spell and that the only way this can be reversed is if Eddie dances naked round a tree at midnight, yelling “Pinky ponky, me white honky!” Of course a policeman turns up on his bicycle to witness this spectacle…

Putting aside the racist aspects, at least the series offered a plum role for Rudolph Walker – nowadays a regular in EastEnders – at a time when leading men roles for black actors were scarce. In an interview at the time he said: “Here are white men writing for blacks and there isn’t a touch of the Uncle Tom.” He also claimed that he saw no problem with the noisy disputes between Eddie and Bill because: “My arguments are as silly as his.”

The early shows managed to strike an even balance by mocking the bigotry that existed on both sides. The men usually came off looking stupid while their more sensible wives having to act as peacemakers. Later on, though, the jokes started to wear thin and the name calling just got monotonous.

Is Love Thy Neighbour the most racist sit-com of all time? I’d have to say no, because that dubious accolade surely belongs to Spike Milligan’s Curry and Chips – in which Spike played a blacked up character called ‘Paki Paddy.’ Spike’s show was actually taken off the air for being racist, and this was in 1969!

As for Love Thy Neighbour, it’s well worth a second look on DVD if you’re able to mentally adjust to the language and times. If you are, then as Eddie Booth would say to wife Joan, “the subject is closed.”