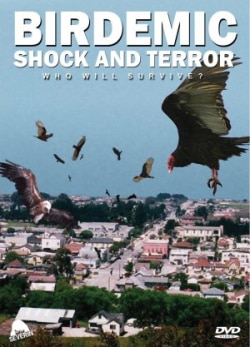 I wish I could properly prepare you for the abomination known as Birdemic: Shock and Terror. The truth is, you’ll never be hardened enough to deal with director James Nguyen’s excruciating cinematic onslaught. Did I use the word cinematic? Sorry, I didn’t mean that. (I also didn’t mean to use the word director.) There is nothing cinematic about Birdemic. There are no signs in the film of even the barest form of directorial competence, filmmaking knowledge, believable dialogue, passable editing, or acting experience. Something interesting happened during my viewing of the movie (besides the temptation to stab my eyeballs out). At first, I couldn’t believe that the film’s badness was unintentional. I gave Nguyen the benefit of the doubt, saying “He’s doing this on purpose, just trying to make as horrid a film as possible.” But the more the movie dragged on, the more I started to think that he was actually serious about this stuff. Maybe he really believes in this movie. In which case, it’s something simultaneously hilarious and tragic. If you watch this movie, you may form your own opinion about whether it’s intentionally awful or not, but in the end it doesn’t really matter. In the end, this movie will break you. A taut driving sequence from Birdemic.

We begin with annoying dramatic music which repeats itself over a lengthy sequence involving a Mustang that rivals the driving/credits sequence from Manos: The Hands of Fate. You will be intimately familiar with leading man Rod’s (Alan Bagh) blue Mustang as he drives California highways, parks, pulls into a diner, drives off, gets some gas, and drives some more. When you first see the waitress staring blankly off into space saying “I’ll be right back with you” in some bizarre accent, while Rod has this dumbfounded look on his face, you realize you are in for some pain. Get used to Alan Bagh’s goofy, deer-in-headlights facial expression, because you’ll be exposed to it the entire film. Bagh doesn’t act so much as stare at a mark offscreen while deadpanning horrible dialogue (somebody is probably holding the script in front of him). The redwood trees in Birdemic give better performances, but I digress.

Rod spots blonde cutie Nathalie (Whitney Moore) and gets her phone number, which leads to 40 minutes of insipid scenes of them getting to know one another. Nathalie, who just walked out of a modeling session at a One-Hour-Photo shop (with bars on the windows, and they also sell beer!), gets a call from a Dream Models representative who tells her she just got hired as the cover girl for Victoria’s Secret. “Thanks for getting me the gig!” exclaims Nathalie, like she was asked to DJ a wedding or something. By the way, Nathalie being a Victoria Secret model is the only believable thing that happens in this film. We also see that Rod is a software engineer-turned-salesman, who just got off the phone with a client. The amount of the sale: $1,000,000. Except that he’s in a cubicle working it like a telemarketer. Choice dialogue overheard:

What does it take to win your business today?
OK, I’ll give you that and 50% discount.
Can we close the deal today? Can I place your order today?

Does this sound like a million dollar contract to you? That would be a hell of a lot of pre-paid cellular phone plans. I up-selled the lightning internet package!

So we have to deal with Rod and Nathalie going out on dates, woodenly reading their lines. Occasionally, Rod watches a news broadcast which talks about forest fires, and melting polar caps. But we’ll deal with the film’s philosophy in a minute. Rod also gets a visit from a solar power salesman who wants to install a 3KW solar panel for $20,000. When Rod expresses doubt over paying so much money, the salesman offers him $1,000 off, and Rod agrees. Well, we’ve already established that he’s not very bright (witness that 50% discount on a $2 million dollar contract), so I suppose this is believable too. Anyway, after dinner Rod wants to come inside Nathalie’s apartment, but she says “Not on the first date. I’m not that kind of girl.” In the very next scene, she’s gushing over Rod to her mother, saying that “He’s interested in what I have to say instead of trying to get something from me!” Yeah, she’s not very bright either. By the way, her mom still expresses her wish for her daughter to be a real estate agent, even through she just got a cushy, lucrative job with Victoria Secret. Jesus. Next, we are introduced to Rick (Danny Webber) and Mai (Mona Lisa Moon) who are hanging out in front of a poster that says “Imagine Peace. www.imaginepeace.com“. Not a lot of thought went into that poster, but it’s proudly displayed on the wall. It just so happens that Rick is Rod’s best friend, and Mai is Nathalie’s best friend! Wow, small world. Except nothing ever comes of this plot revelation except for a double date, which comes and goes with no consequences whatsoever (by the way, on their date they watched An Inconvenient Truth

). Um, it’s also revealed that Rod’s company NCT software was just bought out by Oracle for (say this in Dr. Evil’s voice) “One billion dollars!” So stock options for all! The board meeting ends with 5 minutes of clapping, which stops and starts every time Nguyen changes his camera to point at a different side of the table. Imagine there’s no movie. It’s better if you try.

A point about sound editing on Birdemic: it sucks. There’s no flow, since every scene is done with ambient sound that spontaneously cuts out every time the shot changes. I should also mention that Nguyen is fond of slowly panning the camera left or right. That’s the limit of his directing skills. Anyway, now that Rod is rich, he says he’s going to take an early retirement “for a few years.” (Somebody needs to explain to Rod what retirement means.) We soon see him in a board meeting asking some VCs for $10 million dollars for his new solar venture. The investors agree almost immediately, the dopes. About a half hour in now, and we have to follow Rod and Nathalie as they attend an art & pumpkin festival. They watch a parade for what seems like an eternity. At 40 minutes in, Rod meets Nathalie’s mom, who says what she likes to do:

“I love my retirement. I was a jeweler for 30 years and sometimes I miss not going into the jewelry store but I really like retirement. I like to travel, I like to cruise, and I enjoy watching television.”

Is this a social visit or is Nat’s mom doing a video for one of those dating services? Lots of gentleman callers at The Villages.