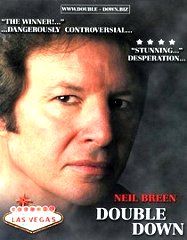 Among stock footage of clouds, the title card “Double Down” comes up, then the name “Neil Breen” and then a few moments later “Produced, Written, & Directed by Neil Breen.” That’s it – no other references to the rest of the (limited) cast and crew, communicating to us that this is a vanity project – real estate agent-turned-actor/director Neil Breen’s baby all the way.

Lengthy shots of the American southwest evoke a Manos/Birdemic vibe, and then we meet Neil Breen himself, playing “Aaron Brand”, a super-secret agent with big-time hacking skills (first in his class in college in computer science, a fighter pilot with lots of medals, the top agent of the “Defense Intelligent Agency”, able to control any government computer or satellite from a laptop and some cell phones in the desert).

When he is recounting his life story through voice-over (pretty much the entire length of the film), you could swear he was reading his resume. But the government assassinated his fiancée and so now he works as a terrorist. What a guy! Folks, watching Double Down, I was truly floored. I had seen some trailers for Breen’s “movies” but nothing prepared me for what I was to experience. After I watched it I learned an important lesson – never say out loud that a particular film is the worst movie ever made. Something else will soon surface that will make you eat those words.

This Aaron Brand character goes on and on with this narration of his for the entire 1 hour and 45 minutes of Double Down, and most of it consists of monologues about how awesome he is, and how much the United States government sucks for killing the love of his life (that he met when he was 7 years old).

Here are some examples of how wonderful super secret double agent/terrorist/mercenary Aaron Brand is:

I see some hands going up. “Hey, how come he acts like a ‘good’ guy by taking out white-collar criminals and giving money to kids charities, orphanages, and hurricane victims but still intends to set off biological bombs that will kill thousands?”

The answer is – shut the hell up.

Any more questions? Our “anti-hero” is shown wandering around the desert, occasionally developing “new product” (read: bio-terror weapons), which he gives to people to release when the time is right. His new mission, from an unnamed source (some country, somewhere) is to “shut down” Las Vegas for two months (“Enjoy it while you can!” says Aaron). This is attempted by – I think – setting off some kind of bio/chemical weapon which will decimate the strip but somehow do it discreetly. (So, will the suckers at the slot machines notice, or not?)

But the movie doesn’t really care about this plot point, choosing instead to spend most of its time in the desert just hanging out with Breen by his car, and watching him occasionally meet some mysterious person and give them a bag of anthrax, or meet up with some CIA agents who think he’s still working for them.

The agents tell him to kill somebody. Then he drives around the strip in a stolen Rolls, intending to experiment on an unsuspecting couple or something, but it’s the wrong couple, so he kills them and drops them off in the desert.

But then his real targets went off to the desert and killed themselves? (Huh?) Then he hangs out with his dead girlfriend some more while telling the audience how confused and depressed he is. Then he goes back to the strip and throws some anthrax on a guy. Then he hires an escort (who sounds like a guy doing a girl’s voice) to distract one of his targets. Then the girl dies. Then he goes into the desert for an anthrax buy. He gives it to the agents and runs off, while one agent says “He’s on a quest. Don’t ask, he’s protected. From the very top. Extremely top secret!” After recounting a story where Aaron hacked into a drone and crashed it, the agent guy says “He’s too smart for us! A magician!” Then it’s back into the desert where Aaron says to his dead lover “I’m so confused and depressed about my double life!”

At this point, we are looking for hope that something that makes sense – really, anything logical at all – will happen. Aaron informs us that diversionary attacks will take place around the world, but when the attacks finally do happen, they consist of nothing but random stock footage shots of firefighters putting out a forest fire, a police car, somebody being loaded up in an ambulance, and that’s about it.

After an emotional breakdown – a rather hilarious emotional breakdown – he puts a few government top dudes on a conference call (FBI Director, CIA Director, Director of Homeland Security, and some random Senator guy). He tells them how to stop the attack on Vegas – somehow. We’re not sure what he says to them, or what the attack was supposed to be. I guess the details aren’t important – Double Down isn’t really interested in details, logic, or plot coherence.

Anyway, the point is this: nothing happens in Double Down. Nothing except excruciating acting, inane dialogue, interminable desert scenes, overused dramatic music from some public domain sound effects library, and endless shots of Neil Breen fiddling around with a satellite dish, a couple of laptops, and numerous tuna cans.

Double Down is filled with wonderful head-scratchers, like the scene where he has to test a bio-weapon before placing it in “the entire lake.” But he releases the test powder into the lake! (What?) He has a lot of dreams, but also has nightmares. (What?)

He’s working with a US government agency that thinks he is on their side, even though he just told us that the government knows about his terror bombs. (What?) There are unending, torturous scenes of Neil Breen climbing up and down rocks. There are hilarious scenes of him using a wrench to turn bolts that don’t exist or typing random keys on laptop keyboards to make it appear like he’s “hacking” something. Then there’s the “symbolism” – blood on a flower, a semi-nude body floating in the water, ghosts in the desert, visions of Aaron’s dead lover, and an old man dying after telling him that he’s “the one.”

and said “Hey, I can do that!” Neil Breen thinks he is sending an important message about the government, or world affairs, but if there’s a more inept, confusing way to do it, I am not privy.

or Hal Warren. No, Neil Breen is in a class by himself. Actually, the closest director he can be compared to is… Coleman Francis. Yes, Coleman Francis of The Beast of Yucca Flats

and Night Train to Mundo Fine

. The countless desert scenes, the bizarre philosophical non-sequiturs – it’s all here. Not to mention the sound sync issues, or the weird way that people conversing with one another don’t appear to be in the same scene together.

Double Down is a real, honest-to-goodness chore to sit through.

It’s a movie filled with non-events. (I believe there was more going on in Will Zens’ The Starfighters

). Breen plays a crazy man climbing up and down rocks, giving so much exposition through narration that it’s criminal, going through emotional turmoil (with a number of hallucinations – or are they?!), and emerging on the other end of it as an “enlightened” person who decides not to go through with the attack after all. What we are left with are stock footage of the Nevada desert and the Vegas strip.

Certainly, that must be a good advertisement for prime real estate, which Breen (being a realtor) would be happy to help with. The film is, as one IMDB reviewer calls it, an “epic piece of cinematic nothingness” and a major jaw-dropper. I would call it among the worst ever made, but then again he has made two other films – I am Here… Now, and Fateful Findings, which I haven’t seen yet, I will refrain from making any final decisions on the matter. In any case, you must experience this “film” – if you emerge on the other side of it intact, you may have a newfound appreciation for guys like Tommy Wiseau.

All I know is that every time I think I have seen the worst movie ever made, something more horrible and inexplicable crawls out of the woodwork. It’s like I’m falling into a downward spiral for all eternity.

Neil Breen is indeed a real estate agent in Vegas, who apparently made millions and decided to make movies on his own (just like Mel Gibson!) And check out Double Down‘s end credits: Lighting – None; Makeup/Hair – None; Catering – Neil Breen(!) He is, as some blogs have mentioned, a true outsider in the world of film, following in the footsteps of people who said “Hollywood? Screw ’em!” (like Wood, Francis, Warren, Nguyen, Wiseau).

Hey, there’s something to be said for that. His movie is inexplicable, but if I was given a camera, would I really be able to do better? Actually, yes, I think I would, and so would you, dear reader. But that won’t stop me from recommending this piece of bizarre cinema, because I feel it’s a unique pain that we all must share. In addition, I learned a few very important lessons – you can get kick-ass footage of Vegas, the desert, and the sky; a few props, a car, and some grateful clients are all you need to make a movie; finally, sound sync is not required. Bless you, Neil Breen, and can you find me a good place in Summerlin?

Watch the Double Down trailer, in all of its’ 3 glorious minutes:

More about the amazing Neil Breen at Inside Pulse.