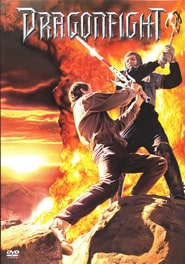 In the old days, when men lived by codes of honor, there was Dragonfight. You know, gladiator battles or something or other. At least that’s what the Warren Stevens-directed “film” Dragonfight suggests, when a pony-tail wearing Michael Paré (from Eddie and the Cruisers

) talks about it to his boss Asawa (the immortal James Hong). But Asawa laments “This is the 1990s .. we’re businessmen. We compete through corporate acquisitions!” However, Paré’s character already has put plans in motion for a modern day “Dragonfight” and Hong gets a chuckle out of it, finally giving the plan a greenlight. Cut to a bar where a mullet-wearing “Falchion” (Paul Coufos) is sulking over drinks before being drawn into a fight with some pumped up asshole (played by Canadian strongman Tom Magee). Paré’s shady businessman sets it up by having his bartender/girlfriend drop drugs into Magee’s drink. The drugs….well, I have no idea what they were intended to do. The movie kinda forgets about that little plot point. Anyway, Falchion is victorious in the back alley fight (actually, the other guy gets accidentally stabbed in the back by his idiot friend), so he’s recruited for Dragonfight. Similarly, some dirtbag named Lochaber (played by Robert Z’Dar … and his chin) beats up his own group of thugs and is brought in as well. So these two guys are dropped into the Arizona desert to battle one another, and a couple of major corporations have bet hundreds of millions of dollars on the fight. Now, if you’re wondering why mega-corporations would bet all this dough on something so illegal, well, let Mr. Jericho (played by George “Buck” Flower) narrate it for you in his throaty hillbilly voice:

It was the end of the century and the human race was tired. That’s probably how come they let it happen. You see, just as the world’s governments had learned to get along with each other, the mega-corporations stepped in and spoiled it all… threw down the gauntlet at each other. Dug up some sort of ancient Japanese rite of battle. They called it “Dragonfight.”

movies (“Crazy drunk drivers!”) or maybe you remember him as the rags-to-riches guy who sold out in John Carpenter’s They Live. (“We all sell out every day! Might as well be on the winning team!”) Still don’t recognize him? OK, just try to imagine the above quote being being said by Waylon Jennings as he’s making down-home commentary on them Duke boys. Got it? Good! The script to Dragonfight is hilarious!

So anyway, as the Dragonfight gets going, the camera occasionally returns to corporate offices, where dudes in suits watch intensely on TV monitors while expressing awe at the whole thing:

“I don’t give a damn about the money, it’s all this stupid Japanese kung fu crap is new to me, I’m learnin the game.”
“Hey, if we’re gonna beat ’em at their own game, we aint got time to learn… we just gotta do it!”

Now this guy Falchion (Paul Coufos) is some kind of super warrior. James Hong says that according to Bushido, there are five rings of power that makes him the greatest warrior… in the American southwest, at least. But just as he’s dropped into the desert by helicopter, he starts having second thoughts. As Buck Flower helpfully narrates in his laid-back Southern style: “One of them dragonfighters started thinkin about what he really stood for… and he didn’t like it!”

Well, damn, that’s a hell of a time to change your mind, 2 minutes after being dropped into battle. James Hong shouts “This is not the behavior of a champion!” His colleague answers with a witty “No, but it is damn sure the behavior of an American!” Those Americans, always going against tradition! Oh by the way, the name of the company James Hong’s character runs is called Gaijin Corporation. Yeah. The Corporate Hair Wars of the 1990s Well, The Chin (Robert Z’Dar) is all decked out in chainmail like some sort of knight, swinging an axe around, talking about how the only thing that matters these days is what’s in the “corporate vault.” In order to get Falchion to fight, he starts taking out random idiots who happen to wander into frame – a motorcyclist, a couple of deer hunters, some campers, etc. This freaks out all the stuffy suits who are paying for this shindig but there’s not much they can do about it. Then Falchion gets hit by a truck driven by Sandy (Alexa Hamilton) and her uncle Jake Jericho (Buck Flower). A few thoughts come to mind: A smart man has plenty of beer on hand to get through Dragonfight.

At this point, Sandy and JJ give Falchion a lift to the ranger station, but one of the jerk corporate guys (Joe Cortese, who looks like Michael Douglas if you squint just right) orders a helicopter in to blow all the rangers away. The last surviving ranger is none other than Sandy’s old flame Moochow (played by the late Charles Napier) who joins the group as they try to avoid the goofy Robert Z’Dar and his mighty chin of doom. (And that same year, Charles Napier would star alongside Z’Dar again in Maniac Cop 2 Why is this scene in here? I don’t even…