Hey, did you know that Parmistan is a tiny mountain nation in the middle of the Hindu Kush range? I guess it’s so tiny that you can’t even find it on Google Maps. No matter, the important thing here is that Olympic champion gymnast Jonathan Cabot has been given an urgent assignment by the United States government: travel to Parmistan, take part in “The Game,” and win a chance to place an American “Star Wars” satellite station there to warn the U.S. of any Russian attack. All in a days work for a dude who utilizes a “subtle blend of the martial arts of the east and the fighting skills of the west. Karate and … his own special gymnastics.” Ladies and gentlemen, I give you: Gymkata.

Arriving right smack in the middle of the 1980s, Gymkata

could be compared to other Reagan-era action thrillers like Rambo

. It could be, but I wouldn’t do it if I were you. Better to compare Gymkata to those other cold war era “movies” like Megaforce. Plotwise, the film is similar to some other features directed by Robert Clouse, including Enter the Dragon

, where the star has to survive some kind of deadly tournament. Remember that by this time everybody loved martial arts (The Karate Kid

was a success the year before; Bruce Lee and Chuck Norris were favorites.) Also note that the 1984 summer olympics had just taken place in Los Angeles, with the USA taking home 83 gold medals. Kurt Thomas was already an impressive gymnast and had earned six medals at the World Championships in 1979. He was favored to win some gold at the 1980 olympics, but as you recall, Jimmy Carter boycotted the Moscow games that year because of the Soviet invasion of Afghanistan. In any case, Thomas was good enough to have two moves named after him, including the “Thomas Flair,” and the “Thomas salto,” which is to this day an extremely dangerous move to perform.

Where the hell am I going with this? Oh yeah, somebody at MGM thought it would be an awesome idea to make an action movie starring Thomas as some kind of U.S. spy named Jonathan Cabot who knows karate and gymnastics and can combine them both into a lethal form of combat. (Try not to laugh at the trailer to Gymkata, where the serious narrator explains how Kurt Thomas becomes Jonathan Cabot! Right, I can’t think of anyone else to play the immortal character of Jonathan Cabot, can you?) At the very beginning of the movie, we see Cabot’s dad taking part in a deadly tournament, or race… aw, hell, let’s just call it a most dangerous game, shall we? He’s shot by an arrow and presumably falls to his death. Our next scene finds Cabot winning a gymnastic competition of some sort and then being whisked away to a mountain retreat, where a special agent named Paley (Edward Bell) informs him of his mission, as I described above. You just have to assume that the CIA makes use of lots of gymnasts as assets; Cabot doesn’t seem surprised at all about his assignment, as if he’s done this before. Training for the Parmistan mission includes doing a walking handstand up some stairs, where the camera helpfully centers on Thomas’ crotch. Wow, thanks, Gymkata! 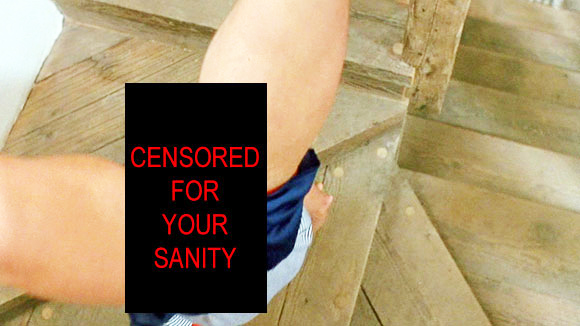 Helping out, somehow, is Princess Rubali (the very cute Tetchie Agbayani) who doesn’t say a word but does like to physically abuse Cabot, which of course means that they’ll fall in love quickly. Rubali knows all about “The Game”, being the daughter of The Khan of Parmistan (Buck Kartalian, who reminds me of Mel Brooks cross-bred with Albert Einstein). Agbayani is from the Philippines, Kartalian is from Detroit. Can’t you see the resemblance? Oh, and about the princess, Paley has this to say about her: “Interesting background. Her mother was Indonesian!”

That’s it? She’s interesting because her mother was Indonesian? Well… ok.

Complicating things is Zamir (Richard Norton), the earring-wearing, dishonorable assistant to the Khan who secretly intends to overthrow him and sell the country out to the Ruskies. Khan has no idea about Zamir’s intentions or the fact that an army is being assembled to overthrow him, nor does he believe it, even though it seems common knowledge to everybody but him. By the way, Norton is Australian. I’m starting to like this Parmistan, a country where anyone in the world, no matter their ethnicity, can easily participate in savage rituals and oppress the local populace. Now that’s diversity!

After his training, Cabot and Rubali travel to Karabal… on the Caspian sea, which is mentioned a few times before a helpful title card drives the point home. They meet up with a local guy named Mackle (Zlatko Pokupec), who flubs his lines a lot, but director Clouse didn’t consider it worthy of a retake. A truly funny scene takes place in the market, where a shopkeeper throws water on Cabot, saying “Yankee, go home!” One of Cabot’s assistants says something like “Well, there’s just a little anti-American sentiment running around, but I think…” and then that guy gets an arrow in the chest! Beautiful. After some “Gymkata” action, Rubali is kidnapped, so Cabot travels to the mansion of the lead terrorist guy named Tamerlane, or something. Apparently, he’s working for Zamir, but just like our hero, everybody operates on a need-to-know basis, and Gymkata has decided that the audience really doesn’t need to know.

Cabot rescues Rubali, which involves finding a pole stuck between two walls which conveniently allows him to use his gymnastic skills to defeat his attackers (he even kicks one innocent guy by accident). I’ll discuss the convenient placement of gymnastics equipment in a minute. After the rescue, the pair find out that Mackle is a traitor (is there anybody who doesn’t work for Zamir?) but Paley shows up and saves the day (maybe the CIA should send Paley into Parmistan instead). After a trek into Parmistan (including a nice whitewater rapids experience!) they are attacked by ninjas (such a nice welcome for Parmistanian royalty, eh?) and Cabot wakes up in bed being fawned over by an ugly woman with no teeth or tongue. He is prepared for the royal banquet, where the Khan announces Rubali’s marriage to Zamir (doh!). As if that’s not enough of a disappointment for Cabot, his idol Thorg shows up (“Is Thorg gonna be here? Let’s hope he makes it.” “Thorg! I’ve admired you since Munich!”) The big, lumbering Thorg (sounds like “thug” get it?) just ignores Cabot, like those ungrateful actors who don’t want you bothering them in public with your stupid camera.

A word about “The Game.” Basically, it’s an obstacle course where a bunch of contestants are sent out and have to make it through difficult levels, like climbing up a cliff, crawling over a gorge, and passing through the “Village of the Crazies” (a walled city where Parmistan sends all its criminally insane – how humane). The contestants really don’t have much of a chance, since their pursuers are all armed with bows and arrows and most of them aren’t fond of following the (admittedly loose) rules anyway. I should mention that Parmistan is overflowing with ninjas (or at least, idiots wearing silly ninja costumes). Some Central Asian countries have an excess of natural gas or oil reserves; Parmistan cranks out ninjas from every nook and cranny. Some of these guys are given special instructions – they are to hold flags and point the way throughout the course, in case the game players lose their way. There’s even a ninja flag guy at the bottom of the gorge – thankless job, indeed. I mean, why have a flag ninja at the bottom of the gorge? Is it because of the nice view of falling bodies? Or in case one of them gets up and needs to find his way back?

By the way, Zamir is an idiot. He knows how easy it is to just pick people off with bows and arrows, but he never thinks to use one on Cabot. Cabot climbs up a rope, so Zamir puts a torch to it, instead of doing the smart thing and shooting an arrow in his back. Cabot crosses a rope over a gorge, and Zamir cuts the rope, instead of doing the smart thing… well, you get where I’m coming from.

If there’s one funny thing to take away from Gymkata, it would be the sound effects. I assume I should blame Richard Dwan Jr. (yes, I’m calling you out, sound man!), with all the forceful footsteps and swooshes and hard landings of human bodies on ground and wanton destruction of numerous sides of beef. I mean seriously, did Dwan Jr. just bring his recording equipment into a meat packing plant for a day or what?

If there are two funny things to take away from Gymkata, the second would be the fact that the ‘Stan villages in this movie have all been organized so that olympic gymnasts would have the most comfortable time defending themselves from danger. As I described earlier, one walled city happens to have a high bar set up in an alleyway, which is perfect for Kurt Thomas to swing around on and kick at the bad guys with. The main event happens when Cabot makes it to the village of the crazy people, where somebody was “crazy enough” to setup a pommel horse right in the center of town. Naturally, Kurt Thomas uses it to defend himself with extreme hilarity against the onslaught of psychopaths, who haven’t figured out that it would be better to rush him all at once instead of approaching him one at a time. Well, they are crazy.

How can a village of crazy people even survive as a village? One villager is just mildly frustrated during battle, so he cuts his own arm off. This is not a group of people who would be able to run a marketplace, or grow food, or run a government. They’re great at laughing hysterically through. Also good at acting possessed.

After the pommel horse fight, Robert Clouse drops everything into slow motion for a few minutes, I guess because he thought that was creepy. Turns out that it’s just really boring and pointless.

Then there’s more stupid as Cabot is rescued by his father, who was previously seen shot with an arrow and falling into the gorge. But fortunately “the trees along the way broke my fall!” Uh, yeah, but if you take a look at the gorge, you’ll noticed that there aren’t any trees! Doesn’t matter, only a few minutes of the father/son reunion pass before Zamir puts an arrow into daddy’s back (which is what he should have done to Cabot ages ago).

So now Cabot has all this baggage heaped onto his short-but-muscular stature: Win for Dad! Win for Princess Rubali! Win for the USA!

Which, of course, he does. Using GYMKATA!

In the end, Zamir is crushed between Kurt Thomas’ thighs and his army of traitors are defeated by the Khan (with help from a catsuit-wearing Rubali, and the villagers themselves, who are obviously so happy living a Medieval existence under a despot, they’ll do whatever the Khan tells them to).

With Cabot victorious, a title card informs us that the first early warning station for the Star Wars program was placed in Parmistan. What it doesn’t tell you is that a year later Parmistan underwent a bloody civil war and was partitioned into Yakistan, Mallastan, and the Parmistanian Republic. The satellite station now operates as a low-powered, local UHF station which broadcasts old Bollywood films late at night.

Fun things to spot in Gymkata: