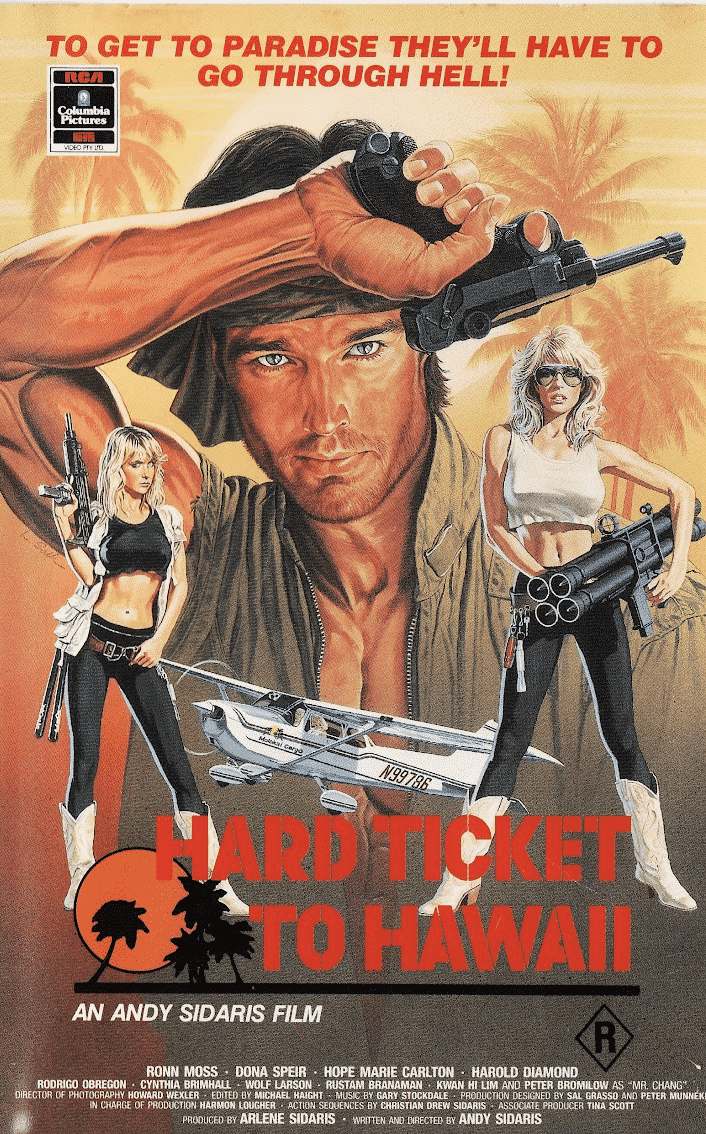 Our look at Hard Ticket to Hawaii Continues Hard Ticket to Hawaii – shameless in so many ways!

Stumbling across Mr. Chang’s “clever” plan of sticking stolen diamonds in a radio-controlled helicopter and flying it to shore to get grabbed by his minions, they get away with some of the jewels after hitting one bad guy with a throwing star and another with nunchucks. So now they have to go up against a bunch of bad guys who have targeted them, and to top it off they have to deal with an escaped live snake that is – get this – “infected by deadly toxins from cancer-infested rats!” Ha! After hitting the jacuzzi, where Donna does “her best thinking” (uh-huh), they get attacked, losing the diamonds (and the snake escapes!). They later reflect on the incident, fantasizing about how James Bond would have taken all the bad guys out, and then jumped their bones (“Me first, of course,” exclaims Taryn, that little minx!) The pair decide to seek out help from agents Rowdy (Ronn Moss), Jade (kickboxer Harold Diamond), and local restaurant owner Edy (Cynthia Brimhall). Some things in Hard Ticket to Hawaii that I noticed:

There’s some bizarre stuff in this film. The guy on the skateboard, his love doll, and a bazooka, for example. (“He must be smokin some heavy doobies!” says one of our heroes. Is he referring to the writers?) There’s a transvestite named Michelle who is spying for bad guy Seth – the movie treats the girl-to-guy transformation like it’s some huge reveal (maybe it is for some slow viewers out there- “Dude! Lady is really a dude! Crazy town!“). A henchman/guard who likes to toss the frisbee instead of keeping lookout has no problem with a total stranger coming up to toss one around, and he gets distracted long enough for the stranger to replace the frisbee with his own model, which sports sharp blades on its rim. Yeah. The ending where the killer snake comes out of the crapper is a special kind of hilarious.

Also hilarious is the dialogue, samples below: Don’t forget to snake the toilet.

I suppose I don’t need to tell you that the acting in Hard Ticket to Hawaii is godawful across the board, the humor is grade school level, the physics impossible, the effects silly, and the action sequences pedestrian. It’s also kinda boring for stretches and the pacing is all wacky. It moves between a late night Skinemax flick and A-Team

shenanigans (even the music sounds like something Pete Carpenter and Mike Post cooked up on their weekends off). Basically, the movie is like a TV-show with lots of breasts. But let’s face it – breasts are the reason this movie exists. And boy, do Dona Speir and Hope Marie Carlton like to show them off at any opportunity (as I said, you won’t hear me complaining, since their gorgeous figures are by far their best assets here). I will say this in their defense – they are totally game for the material and there’s a playfulness about their performances, especially Carlton, who is adorable. Of course, Sidaris defines their characters as a dude’s typical dream girl – hard-bodied, and hard up for sex; book-stupid, but street smart. I can see why this stuff worked in the 1980s, those caveman days before the discovery of the world wide web. The film is a Playboy version of Charlie’s Angels

– girls go topless but almost never bottomless, actual intercourse is never really shown, and every scene of nudity is shot more like a magazine centerfold than an actual “movie scene.” (People don’t make love in Hard Ticket to Hawaii, they “pose”.) This stuff wouldn’t fly today – when you can pull up any kind of demented perversity with the click of a mouse, breasts (no matter how nice) are, well… boring. Maybe that’s why he threw in the mutant snake. The DVD special feature where Andy Sidaris talks about his films along with Julie Strain (who has a lot of wardrobe malfunctions herself) is fun and interesting. Sidaris knows his fans and is kinda like a Lloyd Kaufman for late night skin/B flicks. Sidaris passed away from throat cancer in 2007. His wife Arlene maintains his empire. Together, the pair made 12 films, including Picasso Trigger

, and Return to Savage Beach

Return to Page One