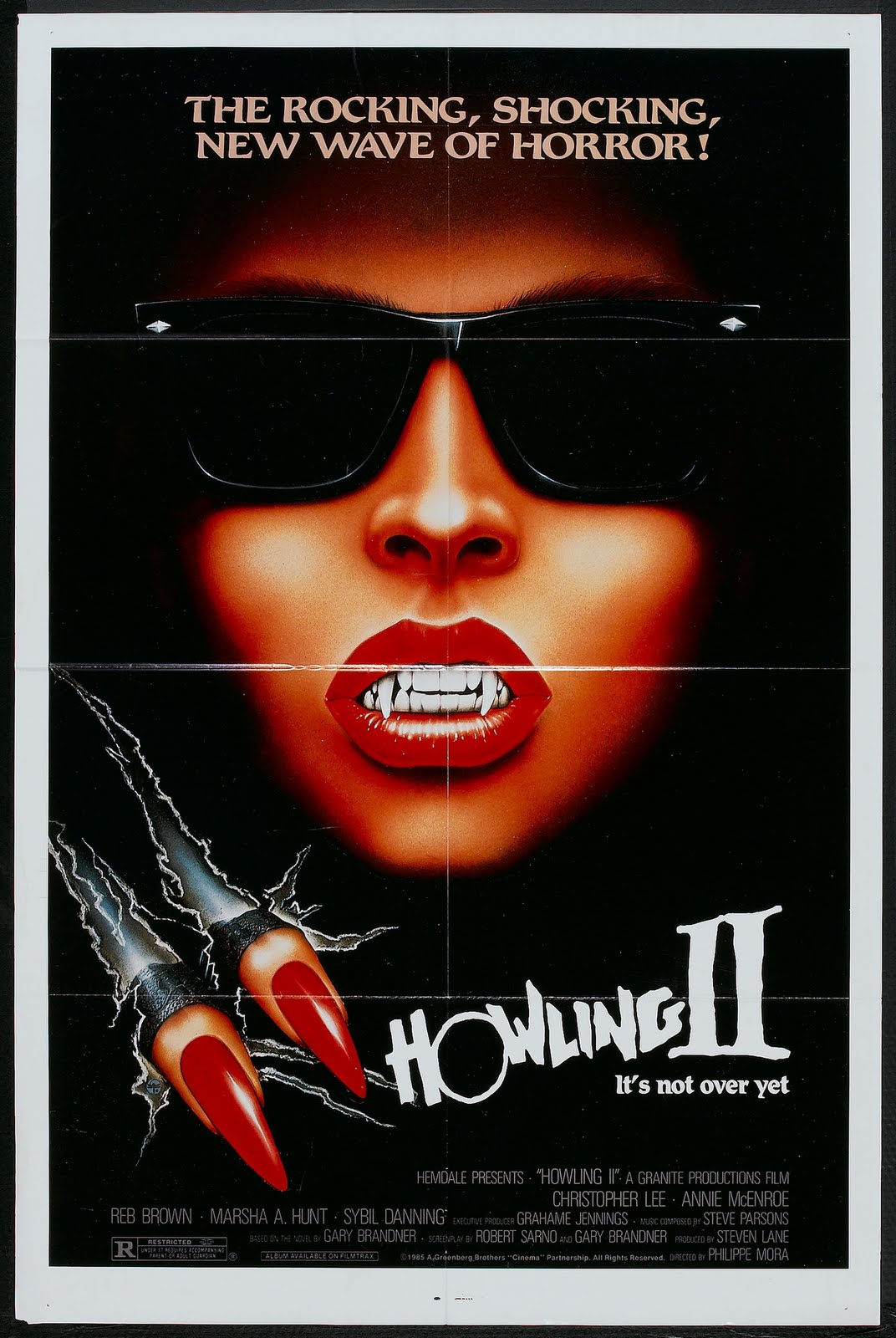 You know something is wrong when a movie has its characters repeating its title in dialogue, as if the audience needed to be reminded: “Ah yes, that’s why this movie is called Howling II: Your Sister is a Werewolf! I had forgotten!” (It reminds me of the time when Sylvester Stallone exclaimed “Stop! Or My Mom Will Shoot

“) Anyway, this sequel to Joe Dante’s film The Howling concerns the brother (Reb Brown) of Karen White (from the first film) discovering that werewolves exist, then taking his new girlfriend/TV reporter Jenny (Annie McEnroe) along with werewolf hunter Stefan (Christopher Lee) to Transylvania to put an end to the reign of Stirba (Sybil Danning), queen of the werewolves. By the way, the original title of this film was Howling II: Stirba, Werewolf Bitch. In my opinion, they should have stuck with that. Unfortunately, no one can be told what Howling 2 is. You have to see it for yourself. You guys ever seen “Horror of Dracula” ? It’s awesome!

Howling II – Your Sister Is a Werewolf

), reading from the book of Revelation, while a classroom skeleton model just sorta hangs out next to him. Then we’re at Karen’s funeral, where we are treated to a (visibly breathing) corpse that looks nothing like Dee Wallace, not even close. Then Lee’s character Stefan shows up and tells her brother Ben that his sister is a werewolf. Ben doesn’t believe it but Karen’s colleague (and Ben’s love interest) Jenny does, for reasons unknown. Also, for reasons unknown to me, Jenny wears a dress shirt, vest, and tie, and sports a boy’s haircut. It must be the 80s. The best part is the actor portraying Ben – none other than Reb Brown, Mr. Big﻿ McLargeHuge himself, as seen in many wondrous films like Sssssss, Captain America

, Yor, The Hunter From The Future

. In case you’ve never heard of Reb Brown, just know that his signature move is yelling like a banshee before shooting something. Your training in trash cinema is not complete until you experience his particular brand of badness. We put our faith in Blast Hardcheese!

After showing Ben the tape of somebody who looks nothing like Dee Wallace turning into a werewolf and then getting shot on the TV news (which apparently had no repercussions – TV viewers being a fickle lot), Stefan tries to put Karen down for good, but not before Ben sees the truth about the existence of werewolves. He and Jenny agree to accompany Stefan to Transylvania, so he can eliminate the werewolf clan run by Stirba, a sorceress who enjoys ripping off her clothes to reveal her ample bosoms. In fact, the movie is so fond of Sybil Danning’s breasts that it shows them during the end credits no less than 17 times (well, they are impressive). Helping out Sybil is Mariana (Marsha Hunt – mother of Mick Jagger’s daughter, inspiration for “Brown Sugar”, and Lee’s costar in Dracula AD 1972), Vlad (Jimmy Smits lookalike Judd Omen, whom you might have seen in Pee-wee’s Big Adventure

), and a coven of ineffectual lycanthropes, young and old, who like to hang out and rub on one another like they’re attending some kind of MDMA party. The trio visit the village of Vlkava, which wasn’t shot in Transylvania at all but Prague. They hook up with a few helpful villagers, including a dwarf named Vasile (Jirí Krytinár) who knows how to take out werewolves when he needs to. (A scene where he kills a guard had me thinking he would have made a good Leprechaun). After Ben and Jenny settle into room 666 (!) Stefan helps arm them with specially-blessed earplugs (so Stirba’s evil howling won’t cause their eyes to explode – don’t ask) and titanium bullets (because silver doesn’t work against these werewolves – only titanium, which is strange because isn’t titanium less rare than silver? Whatever.) Throughout the film you’ll notice certain things, like werewolves being killed by stakes through the heart, a woman swinging garlic around, and the use of holy water. As you all know, these things are all effective against vampires, not werewolves, but really, who gives a crap, right? Because Sybil Danning’s boobs are in this!

The editing on Howling 2 is hyperactive (for the time). Scenes are interrupted with quick cuts to other scenes that have already occurred or inexplicable images with no context. Comic book wipes abound. Special effects are anything but – there is no impressive werewolf transformation like in the first film or An American Werewolf in London Sybil is talking to her stuffed animals again.

Howling 2 plays out like a cheesy music video, straight out of mid 80s MTV. In that regard, it’s a great time capsule. There’s a new wave band (led by Stephen Parsons) that never lets up, (“In the pale pale light of the moonglow/I’ve got a hunger that’s in motion/A hunger that I can’t control/I’m alone now in my room again/On the prowl now, through your dreams again/Howling“). Director Philippe Mora seems to like the song so much, he features the band in the beginning, middle, and end of the movie. In that club scene, Lee shows up to keep tabs on a werewolf and somebody places sunglasses on him. No reason for this at all, but I figured this club was so cool that wearing shades was mandatory. This trainwreck can be counted among one of the worst sequels ever made; it’s also a well-treasured cult item, and for good reason. Like similar entries in the pantheon of cheese cinema, it’s impossible to hate. Whatever can be said about it (and lots can be said), the movie is never boring. Mora, who also presided over The Beast Within

(a movie I kinda like), has said that he originally wanted Howling 2 to be a comedy but producers messed with it. I’m not sure I believe that story, but he’s right about the film being a comedy. To his relief, Christopher Lee is beamed out of the film. And now, young Skywalker… you will die!