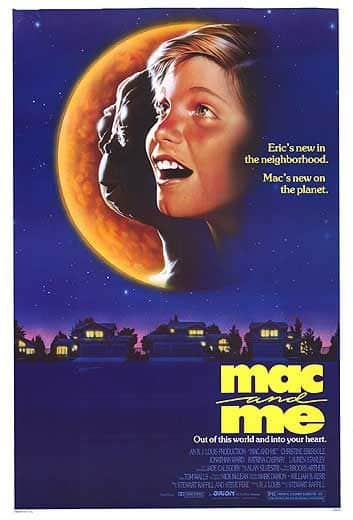 
In June 1982, Hollywood released three of the greatest movies ever made: John Carpenter’s The Thing, Ridley Scott’s Blade Runner

, and Nicholas Meyer’s Star Trek II: The Wrath of Khan. Sadly, all these movies were overshadowed by some cutesy-alien family film directed by Steven Spielberg called E.T.: The Extra-Terrestrial

, which features a cutesy alien stuck on earth and forced to play with Henry Thomas and cutesy Drew Barrymore while chugging Coors beer, gorging on Reese’s Pieces, and watching romantic comedies featuring John Wayne. How adorable. So adorable that it made over 350 million dollars and also made the Hershey Company very happy, since audiences were brainwashed into buying heaps of Reese’s Pieces at their local supermarkets. Anyway, the jerkoffs at Orion Pictures, with dollar signs in their eyes, decided to make an ill-advised E.T. ripoff called Mac and Me

that is absolutely terrible by any known measure, but what makes things worse is the constant and blatant product placements that betray a rather egregious cynicism. I know this is Hollywood, but come on – this thing literally plays like a 90 minute TV commercial.

Mac and Me starts off on some planet somewhere, populated by these… things. How to describe them? Take the puffy cheeks of a squirrel, add extra large dog ears, give it giant eyes like eggs cooked sunny side up. Now add a touch of progeria, some devil horns shaved down to the nubs, give them bodies of Amazing Live Sea Monkeys, remove their genitals, and you’re getting close to the abomination of nature that these creatures represent. The adult version of these alien life forms takes the cake – the dimwitted, wide-eyed facial expressions, the waddle-walk, the enlarged, protruding ears, the pot bellies – it’s like we stumbled into the backwoods hill country of Hick-Planet. The place looks like a barren lump of rock, but apparently full of water just under the surface, seen when daddy alien stabs a straw into the ground and starts sucking away like it’s a Big Gulp. But this alien family’s routine way of life (which seems limited to whistling, waddling, and sucking water through straws) is interrupted by a NASA spacecraft which effortlessly lands itself nearby and starts taking soil samples. Before you know it, the entire family is sucked up into the spacecraft’s vacuum attachment, triggering some kind of malfunction, and the thing blasts off into the sky, carrying our none-too-bright aliens back to Earth. So the aliens are made out of silly putty. Sure, why not?

It’s about 6 minutes into the movie and already all credibility is shot. Where exactly is this planet located? Because it sure can’t be located in our solar system. Anything potentially habitable (notice that the planet has a nice blue sky) would be many light years away, unless NASA has secretly developed warp drive. I doubt it; these guys can’t even prevent a family of four alien simpletons from escaping their supposedly well-guarded base. The smallest one breaks out on his own, hiding away in the family vehicle consisting of single mother (and Sears employee) Janet Cruise (Christine Ebersole), her teenage son Mike (Jonathan Ward), and his little brother Eric (Jade Calegory), who is confined to a wheelchair. The trio just moved to California, supposedly after losing dad (we’re not sure how, but I’m guessing he died). The family has barely settled into their hillside suburban home (Hacienda Heights, if you were wondering) when the little alien stowaway starts in with the electromagnetic interference (radio controlled cars run without batteries, TVs turn on without being plugged in). The next day, Mac (that stands for “Mysterious Alien Creature”) takes a chainsaw to a few doors and trashes the family living room, turning it into a dusty garden complete with stones, sticks, straws, and a moose head. Mom freaks out, and Eric wheels himself after the creature, but his wheelchair breaks and he rolls down a hill, right off a cliff and into some water. Watch the scene below – it shouldn’t be funny, but it is:

In the meantime, Mac’s family is lost in the desert, and occasionally he communicates with them by whistling. Eric tells his mother about the bizarre creature that saved his ass and she calls in a shrink. Eric’s friend Debbie (Lauren Stanley) tells him that the grownups think he has “schizo-freakia.” Eric and Debbie then hatch a plan to catch Mac in the vacuum cleaner, which succeeds, but Mac is hurt, so they fix him up by feeding him Coke through a straw. Coke. The source of all life.

I should stop here and tell you that up to this point, Mac and Me is just plain, run-of-the-mill bad, a blatant ripoff of a much better film (which itself isn’t all that great to begin with). But here, around the halfway mark, the movie gets insulting. The constant shots of Mac sucking down a Coke are just the beginning – the real terror begins at McDonalds. But first we have to endure a really bizarre sequence where Mac takes off on a little toy ATV through the neighborhood, chased by at least 11 unleashed dogs. Forget the alien on the electric car for a sec – I’m supposed to believe that nobody in Hacienda Heights keeps their dogs indoors, on leashes, or gated? I mean, this isn’t Sochi we’re talking about here. This little bit of horseplay is intercut with a truly out-of-left-field sequence of Eric wheeling around with his jogging mother, while a sappy ballad from Bobby Caldwell plays, with lyrics like:

I can’t face the thought of you leaving / So take me along, I swear I’ll be strong … I want you to take me / ‘Cause I long to be able to see the things that you see
Know that whatever you do, I’ll follow you… Somebody must have sent you to me / What do I have you could possibly need / All I can give is my guarantee / We’ll be friends forever

Who is this song about? Eric and the alien? They barely know each other. And secondly, he’s hanging out with his mom. So is the song about the boy and his mother? Who knows? In the meantime, the dogs chased Mac the alien up a tree. Then the scene ends. (How did Mac get down?) Later, government agents show up looking for the alien. Eric hides him by putting him inside a teddy bear suit and taking him to the local McDonalds. Now here’s where we get to the most laughable scene of Mac and Me. Picture a giant McDonalds full of extras dancing in every corner of the place, and filling the parking lot. This being the 80s, I get the impression that the creators of this movie really liked Fame

, etc. And wait till you see a little person in a teddy bear costume cutting it up on the counter of a McDonalds restaurant. There are no words for this:

Don’t you deserve a break today? Aren’t you lovin’ it? That’s great and all, but am I going to get my quarter pounder with cheese anytime soon?

So Eric, Debbie, Mike, and Debbie’s sis (and McDonalds employee) Courtney (Tina Caspary) pile in a van to take Mac into the desert to see his family, feeding him Coke and Skittles on the way. (Taste the rainbow, kids!) The alien family is hiding out in a mine, and they are almost dead, but Mike soon revives them by feeding them… Coke through a straw! (Catch the wave, dudes!) Absurdity levels go critical as the group stops at a gas station, where the alien family escapes the van and heads to the local supermarket to stock up on Coca-Cola and watermelon. Cops show up (with itchy trigger fingers), Mac Daddy steals a gun from a security guard, shooting commences, a gas pump is hit, and the entire Stage Shop Mall explodes (presumably killing all the people inside it – I mean, look at all the cars parked in front!)

Now, Mac and Me gets all sappy, with Eric apparently killed in the explosion, even though (due to bad special effects) it looks like it didn’t even touch him. Everybody is lachrymose, and the whole thing is manipulative, but up until now, the film has just been a wacky comedy with silly alien hi-jinks. In other words, it hasn’t earned this sudden change of mood. Suddenly, the aliens walk out of the fire like demons arriving from a hell-portal, apparently unharmed by the explosion. They lay their hands on Eric and start their annoying whistling routine; Eric briefly rises in the air like Sigourney Weaver in Ghostbusters

, and through some alien hocus-pocus is brought back to life. So you see? These ugly, obtuse, witless life forms may not possess any technology or sophistication, but they are in tune with the universe, ya dig? And that gives them power over life and death. So take that, California elites! Oh, by the way, nobody seems to notice or care that everybody inside the Stage Shop Mall is dead! The final scene is the frosting on the cake of this infuriating piece of flotsam. The alien family are not only allowed to live on Earth (NASA doesn’t give them a ride back to their planet?) but they are allowed to take the oath of American citizenship, thus freeing them to purchase Big Macs and 2-liter bottles of Coke for the rest of their lives! Watching a family of extra-terrestrials, dressed in clothes in the manner that you might put a sweater on your dog, raising their appendages to take a oath that they probably don’t understand, then driving down the highway in a pink Cadillac, I finally realized secondary purpose of Mac and Me (the first one being a cash-grab, of course) – it’s propaganda, singing the praises of capitalism and the American way (where everybody can be successful enough to live dull lives in upper middle class Cali suburbs, suck down soda pop and candy, start work at fast food franchises, and graduate to sales representative at the local Sears outlet store). Worried about the Soviets? Forget it – everybody wants to be an American, even aliens from Bumfuck Planet. God bless the USA, the Coca Cola company, Mars Inc., Sears Holdings, and the McDonald’s Corporation!

Buy Mac and Me on DVD Now available in the lobby. Yeah, we’ll all be holding our collective breath in anticipation…