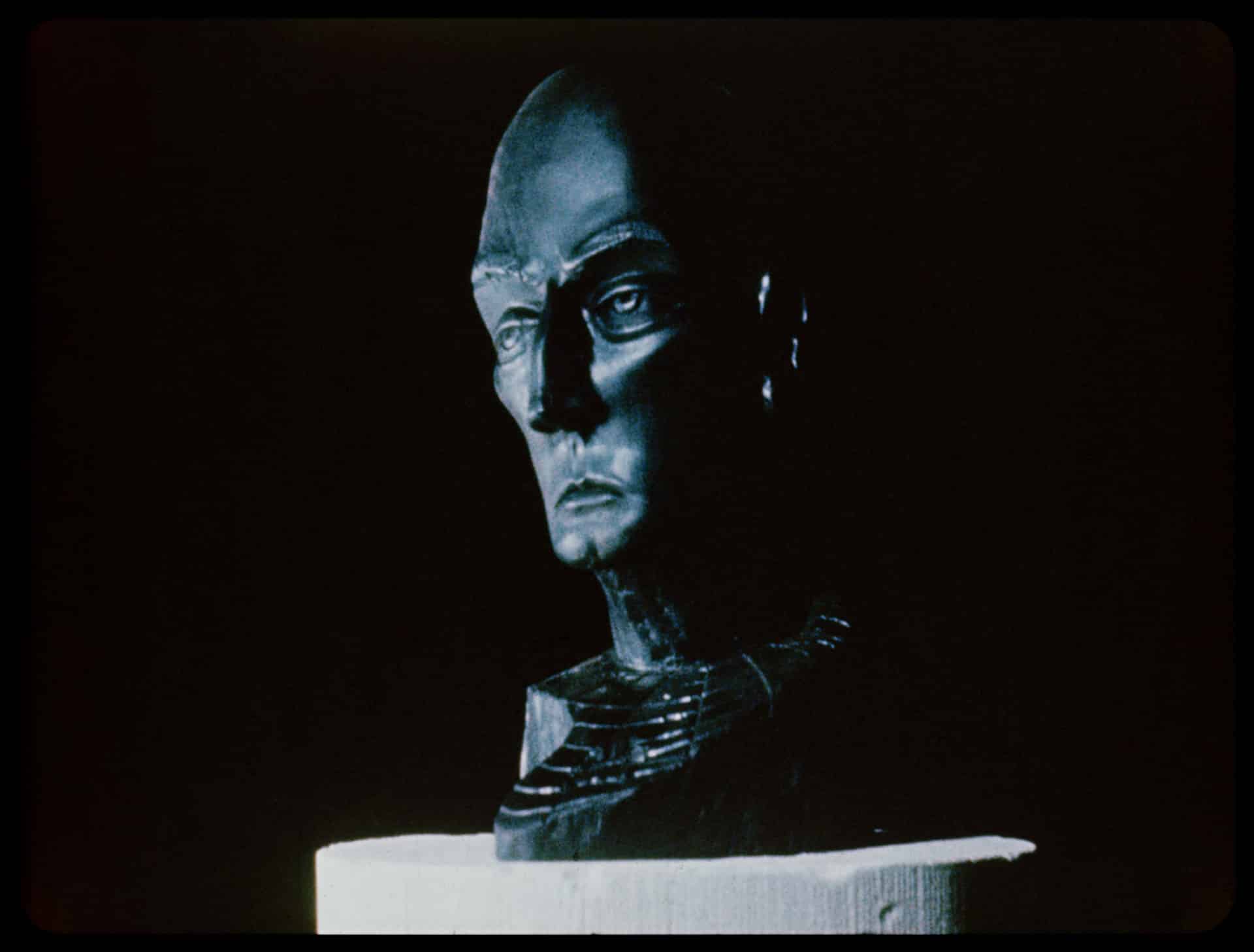 Strange way to start off the Olympics…

Manos: The Hands of Fate is a bizarre film that almost defies the idea of “good” or “bad”, like the time Roger Ebert refused to give a rating to John Waters’ Pink Flamingos

, likening it to a geek show where “stars simply seem not to apply. It should be considered not as a film but as a fact, or perhaps as an object.” That’s exactly what Manos is – some kind of object, a horrible-but-fascinating object, looking like a movie, but in reality being closer to an anti-movie. Give it any amount of stars you wish, or don’t give any – like Ed Wood’s Plan 9 From Outer Space

, they are all accurate. You see, once upon a time, in 1966, a fertilizer salesman named Harold P. Warren made a bet with screenwriter Stirling Silliphant that he could make a successful horror movie on a very low budget. As Warren had no experience in filmmaking, this was a very bad bet. However, his experience with fertilizer came in handy, since he managed to deliver the cinematic equivalent. Manos: The Hands of Fate is so inept, weird, and surreal, it’s like the movie was made by desert freaks on some kind of weekend bender. If the Manson family filmed a movie at Spahn Ranch, it might look something like Manos. It’s ok, honey. You’re going to live with Torgo for awhile while mommy and daddy go to Vegas.

The movie basically concerns married couple Margaret (Diane Mahree) and Mike (Harold Warren, who also fancied himself a leading man) driving around the desert roads of El Paso, Texas along with their little girl Debbie (Jackey Neyman) and dog Pepe, looking for a place called Valley Lodge. After interminable scenes of driving in their Ford Galaxie, where the camera shows rolling fields scored to a strangely-alluring jazz soundtrack (with flute, piano, and female vocals), the couple get lost and end up at a house (that wasn’t there a few minutes ago!) where Torgo the caretaker (he takes care of the place while the “Master” is away), after an uncomfortably long silence, finally agrees to let the family stay the night (even though it’s never established that this place is a lodge). Torgo himself (played by John Reynolds) is a piece of work – he stutters and stumbles about, carrying a bizarre walking stick with the shape of a hand at the top. His knees bend strangely, causing him to hop around, and he’s accompanied by annoying, repetitive theme music, meant to suggest he’s some sort of threat. (Later, it was discovered that the character of Torgo was intended to be a satyr, with hooves, but this is never seen on camera). Somebody can’t keep their manos to themselves…

An ominous painting featuring Torgo’s “Master” and a vicious dog freaks Margaret out, then Pepe the dog is killed by an unseen creature out in the desert. Soon, we find that The Master (played by little Jackey’s dad Tom Neyman) has awakened from his slumber, along with his harem of wives (played by local models), who like to bicker alot. They argue about what to do with the intruding family, mostly at odds with one another about whether to kill little Debbie or turn her into one of the Master’s new wives. By the end of the flick, she is indeed strapped to a pole dressed in white as a new “wife”, but is that better or worse than killing the child? Anyway, the wives have a knockdown/dragout wrestling match, which as Joel Hodgson pointed out, was probably the reason the whole movie was made. Meanwhile, Torgo falls in love with Margaret, makes a clumsy pass at her, and then gets his hand roasted on the fire by the Master, who is dressed in black robes and looks like a cross between Frank Zappa and Freddie Mercury. This is all done to appease “Manos”, who is some kind of pagan god, or something. I really have no idea about how the cult of Manos works, but I must say that Tom Neyman has some choice dialogue. There’s also a scene where he beats up one of his wives for insubordination (this scene is not shown on the MST3K version), which is pretty disturbing to watch even for this ick-fest of a film. Manos: the Hands of Fate

is both repellent and fascinating. It feels like it was done by a crazy man, but I think it’s more likely that it was done simply by a guy who had no inkling of what makes motion pictures work or how to make them. If you gave a plumber named Joe a camera and told him to make a movie, you would get something probably as incompetent as this. There is no sense of proper framing (Warren’s head is cut off whenever he talks to the shorter Reynolds on film), proper editing (jarring cuts), or proper dubbing (only a few people dub all characters in post-production). Scenes are out of focus, or are not trimmed properly – characters will stand around doing nothing, then suddenly converse, then stand around doing nothing again. The camera cares not a whit – it just keeps rolling. Remember the joke in the first Austin Powers

movie when Dr. Evil started his maniacal laugh, but instead of the movie switching to the next scene it just stayed there until his laugh fizzled out and everyone nervously stood around not knowing what to do? That happens many, many times in the film, and not on purpose. The movie isn’t scary, it isn’t tense, but it’s very funny, and it has a scene of Torgo being killed by the Master’s wives but merely looks like the women are “massaging air” as Pat Littledog once wrote. You’ll need a lot of booze to get through Manos: The Hands of Fate.

The reason Manos works at all is because, as Keith Allison from Teleport City paraphrases Pauline Kael, we are too used to the tropes of “good” filmmaking, which has now become predictable and dull. A cult phenomenon like Manos is completely unexpected and is unique as to never be duplicated. It is grainy, unpolished, raw, and not tainted by anyone else’s philosophy. It’s just an insight into the mind of Hal Warren, and that’s pretty damn weird. The movie is also a good candidate for study in a filmmaking class – it goes down the list of everything you should not do while making a movie. But then again, why should that be? Maybe more movie makers should be free to break away from the Hollywood method – it would certainly make the atmosphere more interesting. Another positive thing I will say about Manos is that I sorta like the jet-set soundtrack, which is part bossa nova, part poignant piano numbers, like this ending theme:

In making this movie, Warren paid people in “shares” of the film instead of money. The idea is that they would get paid when it became a hit. Imagine their surprise when it wasn’t. It seemed that every problem that cropped up in production was set to be solved in post, thanks to the magic of editing (also imagine their surprise when it wasn’t). It seemed that everybody in the town of El Paso showed up for the premiere at the Capri Theater. When the movie was over, I bet they wished they’d stayed home. Warren would later write another script called “Wild Desert Bikers.” There were no takers. Talk to the Manos cuz Torgo don’t wanna hear it.

Manos: The Hands of Fate fell into obscurity (even Jackey Neyman’s college friends were unable to find a copy anywhere). It probably would have been forgotten forever, if it wasn’t for a little show called Mystery Science Theater 3000

, where Frank Conniff came across a copy and decided to use it for episode 424. It was one of the most popular and infamous episodes of MST3K ever, and Manos had now made cult status. The new special edition

from Shout! Factory that has both the original version of Manos and the MST3K version, plus a new featurette and a documentary on the making of the film called Hotel Torgo.

Buy Manos The Hands Of Fate on DVD How about a little show for Torgo?

Articles related to Manos: The Hands of Fate

Manos in High Definition – Ben Solovey got hold of a workprint for Manos and is restoring it for Blu-ray! Here is the Facebook page.

Where Are They Now?

John Reynolds (Torgo) battled depression and drug addiction. He committed suicide on October 16, 1966 (shot himself). He is buried at Fort Bliss National Cemetery in El Paso, Texas.
Harold P. Warren died of a heart attack on December 26, 1985.
Diane Mahree had a successful modeling career. She will be in the sequel Manos II along with Jackey Neyman and Tom Neyman.
Jackey Neyman lives in Oregon and is a successful painter. Her father Tom (The Master) also lives in the Pacific Northwest. Now, let’s get to work on those roots! Debbie will need to be decontaminated now.