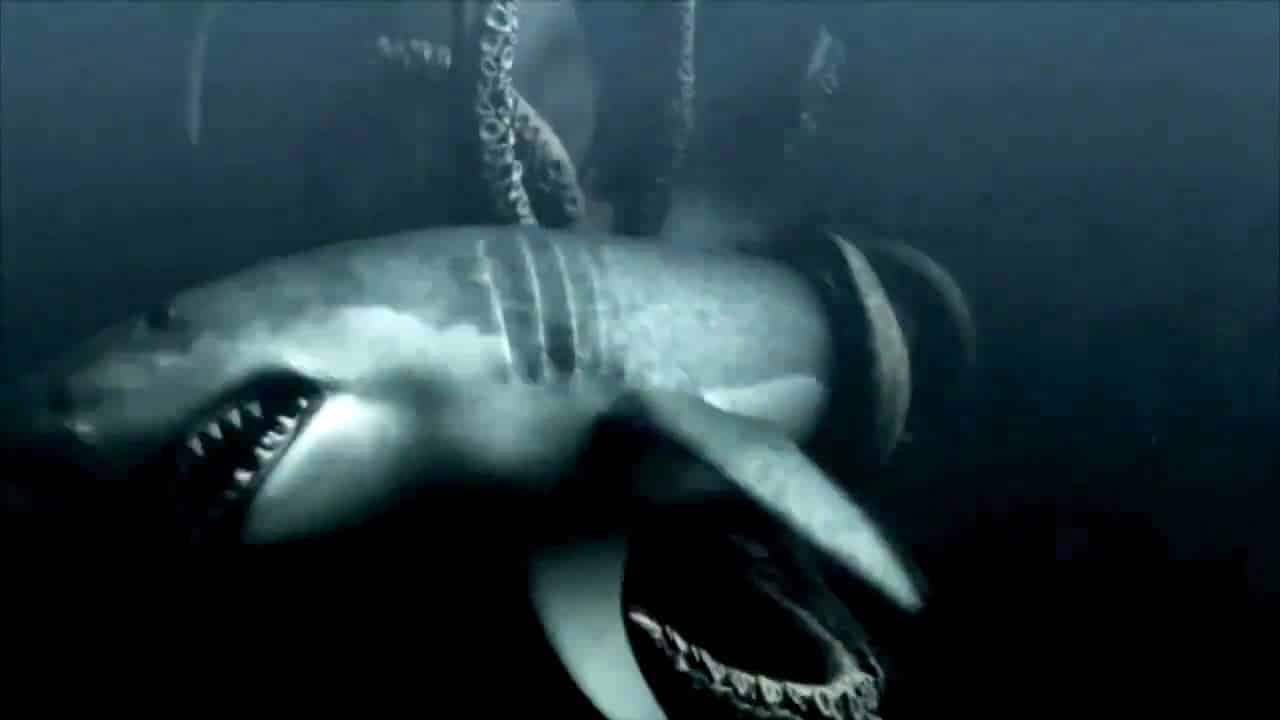 We witness a scene where our three scientists try to develop some kind of bait to draw the creatures in. This involves heavy scientific stuff, like pouring the contents of one beaker into another beaker and watching it change colors. Then they pour drops of a liquid from a vial into a larger vial, but are disappointed when it doesn’t turn the correct color. This is what SCIENCE is all about, folks – constantly mixing colored liquids with other colored liquids! Bartending is more of an art than a science

Emma and Seiji take a break and bond over how much they love the ocean. This leads to a kiss, after which they sneak off for sex inside a maintenance closet. After complimenting each other on how great they smell, Emma gets the idea of using pheromones as bait to draw the monsters. This leads to the creation of a glowing green liquid, which apparently is a SUCCESS! SCIENCE wins again! Seiji goes back to Japan to help trap the octopus. But let’s be serious, nobody can trap a sea monster! An American pilot screams “Noooooooooooooooo!” before being knocked out of the sky by a large tentacle. Talk to the tentacle.

Later, the mega-shark, which can travel 500 knots(!), eats the Golden Gate Bridge! Those poor people! How will they get back to Sausalito? This will be only slightly more annoying than closing the Bay Bridge.

The backup plan: get mega-shark and octopus to run into each other. They will certainly fight each other to the death! Because they hate one another, see. And so, the ending of Mega Shark vs Giant Octopus involves our heroes hanging out in submarines, trying to get these two monsters together while not dying in the process. Cameras shake, bad dialogue is spoken, Julius Caesar is referenced, limited special effects are repeated endlessly, the sub captain has this weird birthmark on the side of his head, and Lamas’ ponytail is constantly out-acting him. The end result is underwhelming, as the creators opt to give us too many scenes of people talking to one another on Naval bases, submarines, battle ships, and the beach, instead of giving us constant Giant Octo/MegaShark action, which occurs in short blink-and-you’ll-miss-it bursts. Sharkie! I haven’t seen you in a million years! Gimme a hug! If you break these Japanese subs open, there’s a fortune inside!

Ah well, at least the Japanese guy gets to bang Debbie Gibson. An Asian guy hooking up with a white girl in a movie is some kind of rare occurrence, slightly more statistically likely than two million-years-old sea creatures defrosting and wrecking havoc on San Francisco.

Funny stuff: In the “making of” segment, Lamas says he shot a death scene for his character. The death scene is nowhere to be found in the film, much to my dismay! Even his pony tail survives. Also dig this funny blooper shot: Start Reading from the Beginning