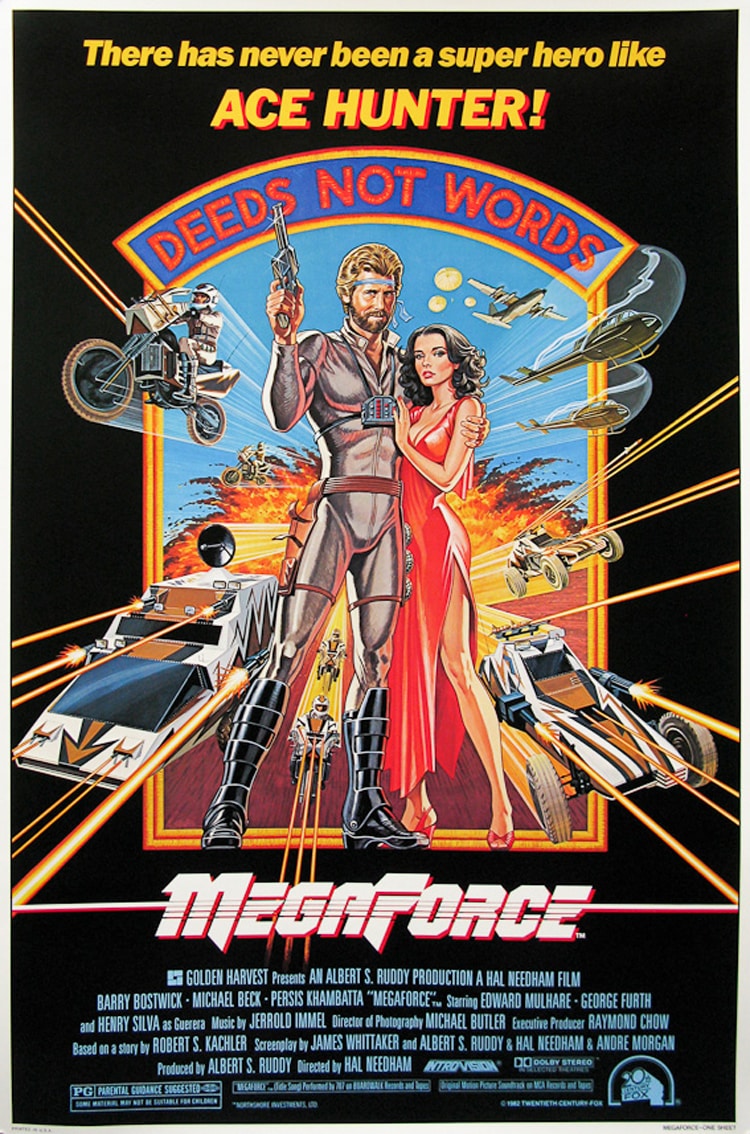 In the 80s, people were crazy. That’s the only true message I can take away from Megaforce, even though I’m pretty sure it was unintentional. Megaforce was released in the summer of 1982 to the delight of 12 year olds everywhere. The thing was distributed by 20th Century Fox (!) and lasted about a week in the theaters. It “stars” Barry Bostwick as the hero Ace Hunter, in full gay warrior mode, Michael Beck as his redneck friend Dallas (yes, the same guy who played Swan in The Warriors – my God, man, how far you have fallen!), and Persis Khambatta (before she died, and with hair!) as Major Zara from the country of… India, I guess? Yes, it’s Lt. Ilea from Star Trek: The Motion Picture. Except she looks pretty hot in this flick. She also did a movie called Warrior of the Lost World, which had Robert Ginty and Donald Pleasence in it. But I’m getting off track. Hot babe with him and he still worries about Michael Knight.

Not convinced you need to see Megaforce? What if I told you it starred that English guy from the TV show Knight Rider? And that the main “villain” of the film is none other than Henry Silva, playing some kind of cowboy, or something? And that one of our heroes is a black guy who goes by the name of Zachary Taylor? (It’s irony!)

Want to know who or what Megaforce is? Ok, I’ll tell you! Megaforce is a mega-force of soldier-types (let’s use that term loosely) from different countries around the world (mostly from the USA though) who are ready to kick ass at a moment’s notice. They are the last resort when somebody around the world needs a good ass-kickin’. And they have futuristic technology, like holograms, flying motorcycles with rockets, etc. Yes, it’s like NATO on steroids. They even have their own Q-type nerd scientist who is really smart, as Dallas likes to say. And their uniforms! Wowzers – tighter and hotter than anything in a 70s disco. I’m not even going to tell you where this thumb has been.

I’m getting off track again. Um, I’m not exactly sure how to review this movie. It’s bad. Really bad. But I dare say the thing is charming as hell, probably because of the naivety inherent in its politics and its views of world events. To start with, the first half of the film is focused on the Megaforce and the various goings-on in their secret bunker somewhere in the desert. We get to meet all the major players, and find out that there’s a huge computer with information on every relevant person in the world (George W and friends probably salivate over this flick). We see that they’re a jovial group of guys who like to have a good time while training to invade other countries. Then we find out they are tasked with a mission to take down a bad guy named Guerera (Henry Silva), who has a rebel army in some foreign country somewhere. But we never even truly meet the guy until halfway into the film when the actual invasion by Megaforce takes place. To get to that point, we have to deal with a strange romance between Ace Hunter and Major Zara, and then a subplot involving Zara’s attempts to prove that she can be a valuable team member. Of course, she proves herself admirably, and Hunter still won’t let her go on the mission. Aha! you exclaim – at some point later the team will be in trouble and Zara will have to go in and save them, right? Wrong! This is Megaforce, baby! We’ll acknowledge feminism, but let’s not go overboard. You’re listening to Super Sounds of the 70s – The Decade of Idealism!

So the Megaforce team goes into whatever country they’re supposed to invade (Gambia, I think), and they start kicking ass immediately. Explosions, motorcycles, tanks, more explosions, superior technology, a command-and-control center run by a 70s reject in shades that kind-of looks like a small studio. Flying missiles, missiles flying, exploding missiles, and so on. We finally meet Henry Silva but he runs around like a chicken with its head cut off. Hmmm… this mission is easy! Not so fast! The English guy from Knight Rider

choppers in and tells the team that they did their job too well, and now if they try to cross the border they’ll start a war! (Nobody considered this?) Henry Silva actually choppers in also – by himself – and what does Ace Hunter do? Well, in the “normal” universe he would shoot the bastard dead. But this is the universe of Megaforce – Hunter goes over and gives him a bear hug, joking with him over old times. Hell, he even forgives the guy for stealing his lighter! Then he lets Henry Silva leave, unharmed, but not before Silva tells him “Back in the seventies you could be an idealist, now it’s just too damned expensive.” Folks, I’m not exactly sure what he means but Henry Silva said it, therefore it must be true! Write that shit down! Remember, folks – Silva is the Enemy. That’s right, the enemy.

The ending has Megaforce making their daring escape by sneaking up on Guerera’s army from behind and blasting them with a never-ending barrage of missiles from their motorcycles, tanks, and cars. This all happens in Gambia but I could swear they were in the Nevada desert. Hell, I thought I was looking at art-cars from Burning Man. But I digress… the gang escapes on a C-130 transport plane, and Hunter makes a daredevil escape on his flying motorcyle as he glides into the back of the already-airborne plane. Well actually, I think the more accurate description would be: he sits on a motorcycle with model-wings attached to the side while hanging from a wire, and video footage of clouds is rear-projected behind him. But not before he gives Henry Silva another goodbye-hug along with the immortal line: “The good guys always win… even in the 80s.” From Rock Horror to this! What happened?

Folks, Megaforce is stupefyingly bad and incredibly entertaining at the same time. The dialogue is peppered with head-scratching non-sequitors, the best of which is Michael Beck telling Bostwick “One time before I made a jump into the night, an old buddy of mine told me something that made me feel a whole lot better – You love ’em in blue and you love them in red. But most of all you love them in blue.” There’s this crazy scene where the group is in a situation room plotting out a complicated attack right down to the intended duration of the battle, and sure enough, during the actual battle the creators of the film put a nice countdown clock in the lower right hand corner of the screen. For my next trick, I’m going to make the studio’s profits disappear!

I’m not sure if the movie is being straight with me or the whole thing is one big spoof. After all, the thing is violent, with explosions and rockets going off every couple of minutes, but nobody ever dies or even bleeds. There’s not even a mano-y-mano between the two main leads. It’s like The A-Team

taking their act globally, sans fist-fights and machine guns. As I said, the whole thing has some kind of cheesy charm about it, as if the makers are saying “Yes, this movie is ridiculous and horrible, but it’s Our brand of ridiculous and it’s Our brand of horrible.” Now watch us enjoy the hell out of ourselves in the middle of the desert. And as I sit there in my chair, amazed at Bostwick’s silver jumpsuit, scruffy beard, disco-modeling-poses, and bizarre thumb-kisses, pondering on the metaphor of a futuristic NATO protecting our asses in Reagan’s America, I am forced into an astonishing admission – the good guys really did win in the 80s. Henry Silva loves it when a cheesy movie comes together!