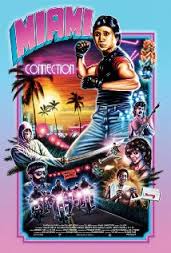 How is it that I have never heard of Miami Connection

? You would think that a lover of bad cinema such as myself would be aware of this film, since I have lived in Orlando, Florida since 1992 and this thing was shot in my town. Made in 1987, Miami Connection takes place almost entirely in the central Florida area, focusing mostly on the campus grounds of the University of Central Florida (east Orlando) and downtown (Church Street/Magnolia Ave/Orange Ave). The problem with my first viewing of Miami Connection was that I was so fascinated with picking out all the familiar locations that I almost forgot how terrible a film it really is. Starring a group of local martial artists with absolutely zero acting experience (including the main character Y.K. Kim who can’t really speak English very well), it has all the hallmarks of a bad action film – bizarre dialogue, melodramatics, ludicrous 80s club scenes – but the thing is so sincere that it starts to grow on you and you start rooting for it. The use of Miami in the title is a bit of a cheat – sure, there’s a “Miami” connection but it’s not that important to the story. But I suppose that if director Woo-sang Park (aka Richard Park) and star/producer Y.K. Kim called it the Orlando Connection not many people would have been interested. (I’m not sure it helped in any case). In the beginning of the film, there’s a Miami drug deal going down which is interrupted by ninjas (!) who kill everyone and steal the cocaine. Yashito, the leader of the “Miami” ninjas (Si Y Jo) takes the stuff to his boy “Jeff” (William Eagle, with huge beard and earring) who will become the top coke dealer in Orlando. We then visit “Park Avenue” (the hottest nightclub in central Florida!) which features the Taekwondo/rock-n-roll act Dragon Sound, performing their hit “Friends Forver” which goes something like this:

Friends through eternity,
Loyalty, honesty,
We’ll stay together,
Through thick or thin.
Friends forever,
We’ll be together,
We’re on top,
Cause we play to win.

As you can see from that video, Jeff isn’t happy about his sister Jane (Kathy Collier) being part of the band (this whole sequence seems inspired by the club scenes in Scarface

, which also featured a top drug dealer hanging about and getting all jealous over his sister). The next sequence shows Jane’s boyfriend John (Vincent Hirsch, who looks like a dorkier version of Alan Ruck) getting punched out by Jeff for not being good enough for her, even though he just met the guy a few seconds ago. Oh, by the way, this all takes place in the parking lot near the UCF administration building, and another scene I liked takes place in a computer lab with students coding Logo (I think) on old-school IBM machines, presided over by John Leeson, my friggin’ computer science teacher. No, for real – to all you UCF alumni with comp-sci degrees, it’s really Dr. Leeson! (I even interned under him for a semester, but I digress). We are soon treated to another performance by Dragon Sound, this time fronted by Kathy Collier, who sings the plot:

The action soon switches over to Church St. (downtown O-town) where our band members (Y.K. Kim, Vincent Hirsch, Joseph Diamand, Maurice Smith, Angelo Janotti) are assaulted by Jeff’s gang and chased down Magnolia Ave. But Miami Connection uses this scene to show off our heroes’ skills at Taekwondo. Let me stop briefly to explain this film’s “Taekwondo connection”:

So now, when you watch the scene on UCF campus where Kim, Hirsch, and Diamond all do Taekwondo practice for at least 5 full minutes, you kinda get the impression that the film might just be a disguised commercial for Martial Arts World. But as we all realize now, Miami Connection

is much more than that – I mean, what other film boasts “Bikers by day, Ninjas By Night?” You can tell someone’s skills at Taekwondo by the way their feet smell.

Suddenly, Miami Connection becomes a biker movie as we descend upon a dive bar with bad guys Jeff and Yashito dressed like Hells Angels, drinking beer and smoking cigarettes while nasty biker chicks bare all and “Tough Guys” by Lloyd-Richards plays on the soundtrack. Whoa, I had no idea that the ninja lifestyle was so accommodating! (I am also reminded of a scene in the film where we visit a gym populated by the kind of freaks who have obviously never stepped foot inside one, ever). Anyway, our heroes go into a restaurant wearing their UCF Knights t-shirts when Tom (the Italian guy who reminds me of John Oates) gets kidnapped, and the guys have to go rescue him, which involves more martial arts action, and bad-guy Jeff is killed from a fall off a platform. (Seriously, that’s how he dies?) You wanted to know what “Florida Man” looks like… there he is on the left.

After a brief period, Jane revisits the guys and doesn’t seem too broken up about the fact that her boyfriend and his pals were involved in her brother’s death, but by her own admission she didn’t like him anyway. No, the person most pissed about it is Yashito, who swears revenge upon Dragon Sound, and sends out all his Miami ninjas on their motorcycles for a final attack. The result is an action packed finale in the woods where lots of ninjas are sliced up, and despite a worrisome scene that makes it seem like Maurice Smith’s character is a goner, Miami Connection takes pity and spares him, so he can get back together with his long lost dad. Did I mention the lost dad subplot? Well, now I just did.

The one scene where somebody is required to truly emote is that sequence where a shirtless Maurice Smith has to bawl out his lines about finding his father (“I didn’t know you had a father” says Kim in his typical stilted, broken-English). Needless to say, Smith will not win an Academy Award for this unintentionally hilarious bit of drama, but you gotta witness it. His story is plausible.

There are so many awesome things I haven’t really covered in detail – the true awkwardness in which everyone delivers their lines, the cheesy-but-catchy 80s soundtrack, the shots of ninjas on motorcycles, the way people in groups mumble lines to make it appear like they are having conversations, the vaguely gay redneck character (?), the lack of police (except for a brief scene), the beach sequence, the biker gangs, the way even minor characters (like the club owner or restaurant owner) kick ass using martial arts. Choice dialogue, too:

So yes, Miami Connection is not a “good” film but in the end I have a soft spot for it, not only because it was shot where I live, but because Park, Kim, and everybody else are so enthusiastic about the project that it’s a little infectious. From the music to the occasional gore effects to the fight sequences, you get a sense that there was effort put into this thing. The icing on the cake is, after all the violence in Miami Connection, we get a title card that says “Only through the elimination of violence can we achieve world peace.” Well, logically, I suppose that’s a true statement; who can argue? Thank you, Grandmaster Kim, for your wisdom. John Oates comes into his own.

Notes: Erin Sullivan from the Orlando Weekly said that Y.K. Kim had no idea what he was doing when he helped finance Miami Connection, but I still say the end result is more entertaining than a lot of pictures made by supposed experts. This film almost bankrupted him. It was shown in Orlando, Daytona, and Melbourne theaters in August 1988 (and West Germany!) but didn’t last long. In 2009, Zack Carlson from Austin’s Alamo Drafthouse bought the film on eBay for $50 and the guys at Drafthouse Films got Kim’s permission to re-release it (Kim initially thought they were joking). Here’s a movie, called the worst movie of 1988 by the Orando Sentinel, that is now a cult hit, and it couldn’t have happened to a nicer bunch of Taekwondo-practicing musicians.

You can now purchase Miami Connection on DVD

. Personally, I am going to track down Dr. Leeson and have him autograph my copy.