Robocop (2014)
Somewhat good cast doesn't give a crapNo soulWhat satire there is, is weak
0.0A remake that didn't need to be made
Reader Rating 16 Votes 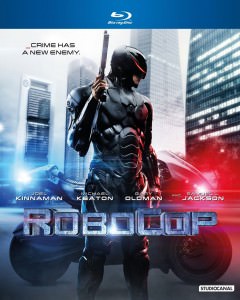 The original 1987 “Robocop” is a classic; sure it may not fit everyone’s ideal image of classic like say “Gone with the Wind” or “Citizen Cane” but it’s still a blood splattering, skull crushing, action packed classic loved by many generations of fans. In an age where the words “reboots” and “remakes” give movie fans collective bouts of nausea, there are just certain films that no one wants to see get ruined by being remade. Yet despite my strongest and most heartfelt prayers and wishes…“Robocop 2014” was still made. No matter what I heard about the film, I knew this was a disaster in the making and all the sleek new “Robocop” designs and all-star casts were going to change that. Still, let’s see if an optimistic and unbiased point of view can salvage things.

Officer Alex Murphy (Joel Kinnaman) is a devoted cop, husband and father with a great job and a great life. That is until an explosion placed by New Detroit’s most dangerous critically injures Murphy, this gives Dr. Dennett Morton (Gary Oldman) the chance to save Murphy’s life by transforming him into a state-of-the-art crime fighting cyborg cop. CEO Raymond Sellars (Michael Keaton) of robotics company OmniCorp wants a 24/7 robot cop who can clean up crime and look good on TV, but soon he and the rest of the world will learn that a man still lives inside the machine and is seeking justice. Usually with my reviews I try to find an even balance of good and bad qualities and manage them so it doesn’t seem like one dominates the review and turns it into pure fluff or 100% scorn.

However, there are times a film is so atrociously bad and horrendously horrible that not even a speck of goodness can be found in the entire film…this is one of those times. Anything that made the first “Robocop” a good movie has been completely and utterly annihilated by the mediocrity of this travesty that director José Padilha had the balls to call “a movie.” The original film was a gory, satirical, sci-fi splatter fest that mixed in powerful moments of losing one’s own humanity and reclaiming it. This remake never had a soul and that’s painfully evident in every area imaginable: script, cast, story, music, effects, pacing; this film was dead on arrival.

Despite having such a stellar cast, none of the actual important leads like Kinnaman or Keaton seem to actually give a crap; that or the script is so staggeringly flat that they can’t even perform properly under its piss poor writing. Gary Oldman, Samuel L. Jackson, Jay Baruchel, and Jackie Earle Haley fill out the supporting cast, they don’t make the film suck any less but at least they are actually trying. This story is heavily modernized and sanitized; it all feels too safe and CGI, two things that the original never would have touched with a 50 foot stick. I actually watched this movie with my wife on Christmas Eve; as a sort of “joke tradition” of watching bad movies during the holiday. But I could barely stand an hour of the movie’s running time; I actually cried out in horror when I paused the film and saw I still had ANOTHER hour left.

I actually wouldn’t despise this film as much if it was called something else and removed the barely passable “Robocop” references and names from its story. It still would be a god awful movie but to associate anything with the original film only makes this remake look worse. I can’t believe I am actually saying this; but this is exactly as bad if not WORSE than “Dragon Ball: Evolution.” Both that film and “Robocop 2014” suffer from the same major flaw: as a movie; it’s an agonizing train wreck of a picture but in relation to the source material, it’s an agonizing abomination that needs to be killed with fire. Sometimes you can smell a movie turd coming a mile away; even if you haven’t seen the film yet, that’s what happened here. “Robocop 2014” is a bionic bomb, a cybernetic crap stain and every other robo related insult I can jab into its core processor. Don’t watch this under ANY circumstance; unless your black out drunk or baked out of your skull because those are the ONLY two ways you will ever enjoy this ungodly junk pile.