It’s 1979, year of the Iran hostage crisis, the energy crisis, and the Chicago “Disco Sucks” crisis. You don’t care, because you’re in Venice Beach, it’s a beautiful day, and you’ve got your quad skates on! Besides, Roller Boogie is playing down at the drive-in and your favorite skater Jim Bray is in it! I mean, you have all those Roller Skating mags with his mug all over ’em. You think Hollywood doesn’t also have a subscription?

Yes, Roller Boogie, one of two 1979 cult skating disco classics (the other being Skatetown, U.S.A, naturally) featuring 70s actors well on their way to obscurity (and B-movie heaven). In this case it’s the adorable Linda Blair, everybody’s favorite possessed kid. She was doing fine after The Exorcist until she starred in Exorcist II – The Heretic

, John Boorman’s beautiful failure that was the wrong exit ramp to Roller Boogie (and beyond).

Roller Boogie stars Blair as a rich girl from Beverly Hills named Terry Barkley who’s a musical genius with the flute. Her boring parents (Beverly Garland, the Roger Corman favorite, and Roger Perry, the guy who played the jet fighter pilot in the Star Trek episode “Tomorrow is Yesterday”) want to send her to Juilliard in New York. She’ll have none of that. It’s the roller skating contest down at the local skating rink she’s interested in. Hey, you gotta think big!

But I’m getting ahead of myself. Roller Boogie opens up with a sequence so silly it must be seen to be believed. Jim Bray, as Bobby James, rolls down the boardwalk looking completely awkward as he tries to look “cool”. A bunch of goofy roller skating friends join him as Cher’s Hell On Wheels

plays on the soundtrack. Come on, these guys look more like meals on wheels. Bobby James is a really great amateur skater and really wants to make it to the Olympics. Apparently, nobody had the heart to tell him that there is no quad skating competition in the Olympics, and by the end of the movie he still isn’t told. Poor guy – but why ruin his fantasy, right?

At the beach, Terry and her buxom blond friend Lana (played by Kimberly Beck, who would later be the spunky heroine in Friday the 13th: The Final Chapter), catch Bobby’s impressive skating, but Terry turns him down when he asks for a skate. 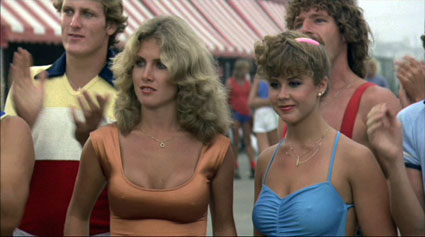 Wait a minute, that’s Kimberly Beck? Where has she been hiding those things??

Anyway, Bobby James is told by his friends that he has no chance with Terry – she’s from Beverly Hills, you see – and he’s just a bum from the wrong side of the rink. By the way, one of his friends is named Phones (Stoney Jackson) who skates around with huge headphones and a retro-tape recorder. Phones is caught up in his own little world – his friends act like they love the song he’s playing, but he’s the only one who can hear it. Sometimes you should just humor the crazies. One of his other friends is named “Hoppy”. He lifts weights on the beach, eats alot, and is a total spaz. Yes, friends, he’s none other than Jimmy van Patten. Wait, this movie has a van Patten in it? You betcha!

That night, at “Jammer’s” skating rink, Terry and Bobby have another meet-cute (he saves her from clutzy skater “Complete Control Conway” – get it, it’s ironic!). She offers to pay him to help her learn to skate. He comes on too strong, and she leaves him, again!

The next day at the beach, she shows up and asks him to help her skate again. Don’t you hate it when girls can’t make up their minds? The couple end up making out on the beach, and then Bobby rejects her (because he’s a total spaz). “Look, you’re not some bimbo from the boardwalk. You’re not gonna pay me for this too, are ya?” As if. Terry slaps him – the only sensible thing she ever does in this movie.