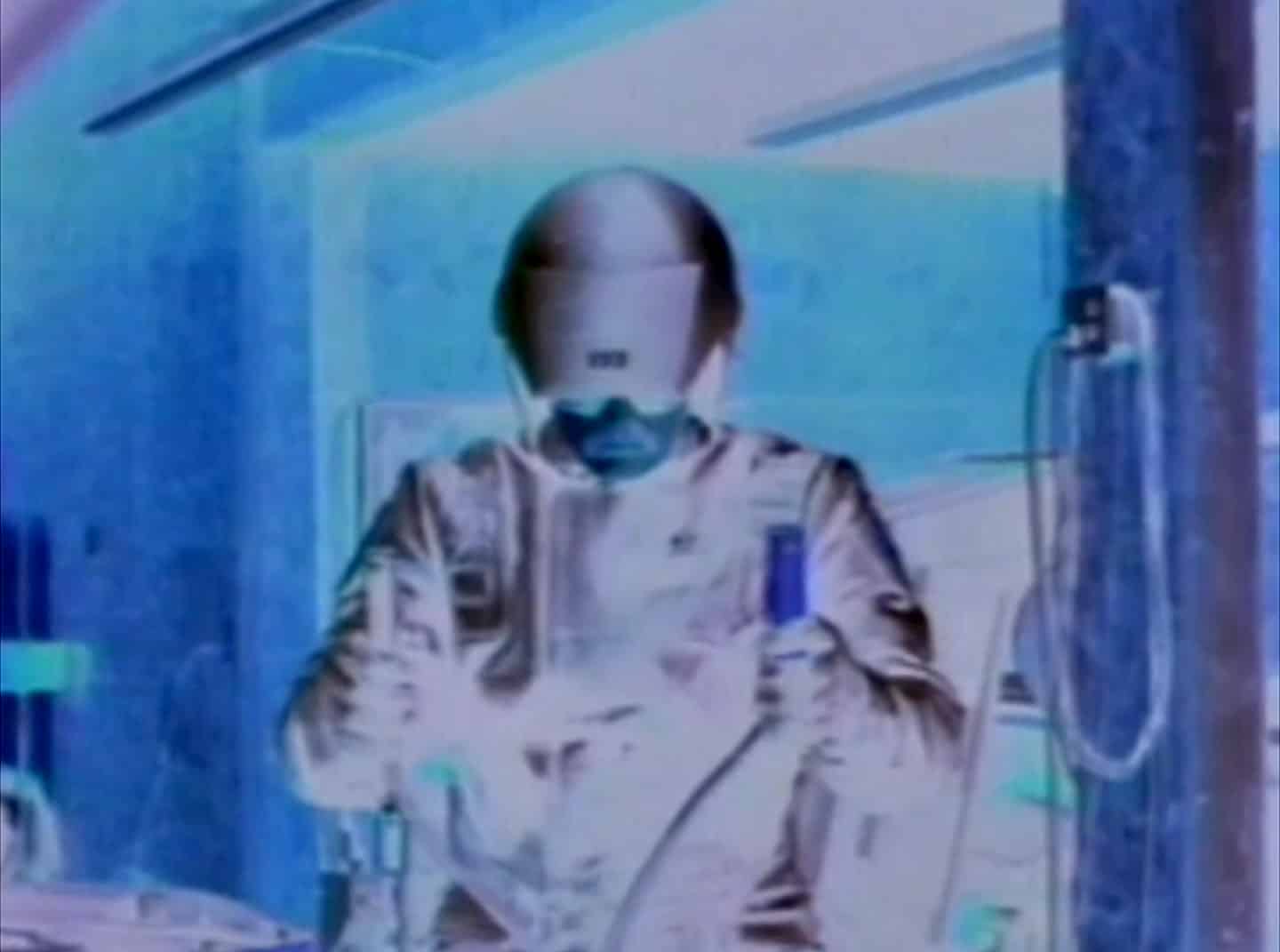 L.A. Scientist: Who are we to create such a thing, heroes and villains?
Captain Barrett Coldyron: The only difference between a hero and a villain is the amount of compensation they take for their services. At our pay scale, I’d say we’re closer to heroes.

Gal: You know that this is an unofficial debriefing. Officially, not an arrest questioning. Then please state so for the record, doctor, unofficially.
Guy (interjects): Officially!
Gal: Officially…

You’ll hear a lot of this kind of talk in 1988’s R.O.T.O.R., an extremely low-budget mashup of The Terminator

featuring silly talking robots, horrible acting, bad dubbing, and excruciating repetitive synth soundtracks. The fact that nobody in the film has any screen presence, acting skills, or camera-appeal only adds to the hilarity of watching “good guy” cowboy Captain Coldyron (Richard Gesswein) recite Milton in voiceover like a high school kid forced to read from his literature textbook. Characters mumble and stumble their way through nonsensical tech-speak and absurd philosophizing in such a way that it’s extremely difficult to tell whether the whole thing is a slick parody or it’s just dialogue written by people who have never picked up an ethics or philosophy textbook, and have never heard an actual scientist speak (or have seen one, for that matter – we’ll get to that in a minute). Perhaps I’m wrong though – perhaps writer/director Cullen Blaine is just putting us on – in which case I say well played, my friend. Brilliant, in fact. Robot, Cowboy, and Scientist could have made it to series.

We start off with the typical Robocop setup – rampant crime, need more cops, let’s build an indestructible one, etc. Except this movie is set in the present, and the police who inhabit the film’s universe have the foresight to predict utter chaos on the streets many years into the future, which is why “Coldyron,” who is your typical Texan who feeds his coffee to his horse and eats the carrots himself, started a special technological division of the Dallas police department 10 years ago! He not only knows how to rope the cattle and ride around open fields waxing poetic about the beauty of God’s country, he’s an expert in artificial intelligence (destroy all stereotypes!) He works with a nerdy scientist and a robot named Willard who reminds me of Crichton the robot from the 70s series Buck Rogers

(the crappy second season). Look closely: Willard comes standard with attitude, police cap, and gun! (How can use use it? He’s got Tom Servo arms!) For a few minutes, R.O.T.O.R. turns into Breakin’

Coldyron gets a call from the division boss, or something, who is very pissed off because Senator Somebody wants results, even though the R.O.T.O.R. droid won’t be ready for about 25 years. After a very tiring, bizarre conversation about politics and corruption which just goes around in circles, I am as confused as to what’s going on as I was before the phone call took place. But apparently Coldyron is pissed enough that he quits, even though this was his life’s work. Coldyron is your typical fascist/authoritarian type – at a meeting he says stuff like “we’ll either control society, or it destroys itself”. Everyone in the room treats his conclusions about society as fait accompli. It’s hard to take what he says seriously, though, when accompanying his presentation is the funniest stop-motion animation of a robot I have ever seen. Try to imagine the exoskeletion of Arnold’s T-800 model; then slim it down, make it look cartoony, keep the teeth intact, and then make it do yoga and tai-chi poses for 5 minutes. Yeah, I think the criminals won’t be shaking in their boots anytime soon. Forget being a cop – give him the yoga class at L.A. Fitness!

After Coldyron leaves to go have a dinner date with his sweetie (scored to “Hideaway“, a typical 80s fluff ballad by Randy Moore and Cindy Smith), the project is left in the hands of nerdy scientist and his robot sidekick. Big mistake. Cut to a jive-talking janitor who proclaims he’s Native American (“Once you go red, you’ll never get out of bed!”). After trying, unsuccessfully, to pick up a valley girl scientist, he accidentally triggers an electrical discharge with his brush comb and headphones, causing “R.O.T.O.R.” to be released from his pod 25 years too early. Except ROTOR doesn’t look like an unfinished model – he looks like a mustached gay biker. 25 years? Somebody is padding out their contract. Now loose with a directive to “Judge And Execute” , Rotor pulls over a bickering couple and shoots the boyfriend for speeding. The girl escapes and leads Rotor on an extended chase along the Texas interstate. In the meantime, Coldyron solicits the help of “Dr. Steele” (Jayne Smith), a woman scientist who invented Rotor’s special chassis, which, by the way, was invented from an “unknown metal with an obscure atomic number.” If Coldyron breaks a lot of stereotypes, Dr. Steele utterly destroys them. Steele is not only an expert in physics, metallurgy, and designing new battle armor, she also had the time to become a female bodybuilding champion while maintaining her sexy skunk/mohawk/mullet hair. In a movie where almost all lines are ridiculous, she comes close to getting the best ones:

Steele: If I miss, you’ll be fighting your own base instincts. To combat pure will, you’ll have to use pure illogic.
Coldyron: What do you mean?
Steele: You will have to allow yourself to fail. Use your failure against him! Your failure, is his failure. Your weakness, is his weakness. Then, only then, can you do something! Do you mind if I do some lifts while you philosophize?

There are so many choice scenes in this piece of cheese. Like “Sensor Recall”, a special Rotor feature that allows him to see into the freakin’ past. Don’t bother trying to figure it out – it’s SCIENCE. A scene in a diner with a cook with fake buck teeth, a kung fu fighting redneck, and a bodybuilder guy who rips off his shirt and poses before he fights. Justin Bieber does this to everybody.

The shocker ending involving a main character’s fate which doesn’t shock in the slightest.

The self-referential jokes related to Terminator and the Beach Boys (one scene infuses its dialogue with Beach Boy song titles). I’m wondering if it really is just a big joke. Whether it is or it isn’t, I laughed my ass off. I’d put R.O.T.O.R. in the same bin as Troll 2 – Troll 2 is worse, but R.O.T.O.R. tries, bless it’s fascist, gay-robot loving heart. By the way, Jayne Smith also played Mary Turd in Flesh Gordon Meets the Cosmic Cheerleaders

. Don’t bother looking up the rest of the cast – the only one with potential – Margaret Trigg – died a few years ago. The rest of them had careers that suffered the same fate. The VHS cover looks cool, doesn’t it? Boy are you in for a surprise…