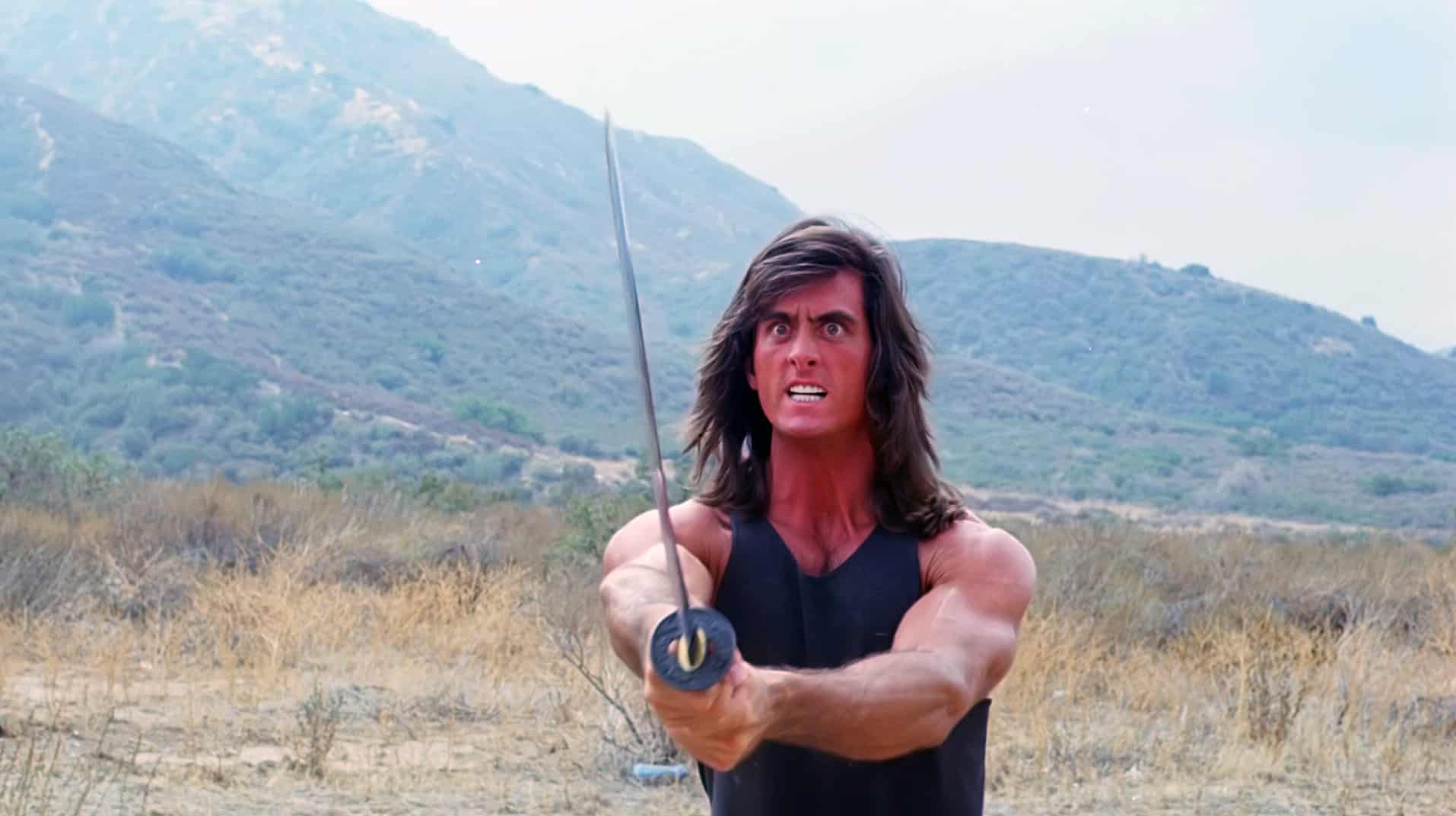 Samurai Cop (1991)
So bad, it's goodThe subpar production and acting are a joy to beholdDialog seems to have been written by going back and forth in Google translate: years before it was invented!
If you're after real Samurai antics you will be sorely dissapointed
4.0So bad, you can have fun watching it
Reader Rating 29 Votes My fists are weapons and… oh, you shot him. That’s cool.

Persian director Amir Shervan only had about 10 films to his name, but in the universe of bad cinema, he has amassed quite a following. After the Iranian Revolution, he moved to Cali and directed some astonishingly bad action films from 1987 to 1992, some of which are not available anywhere (yet). One of these films, Samurai Cop, has recently been released in a restored version for DVD. (Thanks?) Samurai Cop

is your basic ripoff of Lethal Weapon

, except that the Mel Gibson role goes to a non-acting slice of beefcake named Matt Hannon and Danny Glover’s part is filled in by a guy named Mark Frazer, who was good enough that he landed the part of “Young Technician” in the Lois & Clark pilot

and an uncredited bit in Red Dwarf

As the movie begins, we are introduced to Yamashita, played by the Z-movie favorite, aggressively chinned Robert Z’Dar (Maniac Cop

, Dragonfight, and many other bad films too numerous to list here). Yamashita is part of the Katana gang, making a name for itself in Los Angeles. The movie hits the ground running with the hilarity, as adult film star Krista Lane (masquerading here as “Cameron”) stands there awkwardly, announcing the entrance of the boss, Mr. Fujiyama (announcing his presence and hopping in the sack with Bob Z’Dar is all she does in this flick – but that’s gotta be at least as humiliating as anything she does in Captain Hooker & Peter Porn). When this mustache-wearing, mullet-sporting Japanese man enters the frame, you would be forgiven for thinking he’s simply another henchman. Well, surprise… he’s actually the gang’s boss. By the way, Fujiyama is played by… just a minute, I know I have the cast list here somewhere. Hmmm, nothing on IMDB… nothing in the beginning credits… nothing in the end credits either. Certainly he should get top billing on a poster or something… nope, not there. That’s right folks, nobody knows who he is. I have seen articles stating that Fujiyama is played by Joselito Rescober, who does get a mention in the opening credits of the film, but all evidence points to Rescober (who is an M.D. by the way) playing only a small part – the effeminate restaurant waiter (who tells our leads about a guy’s suicide and seems to find it funny).

“I am perpetually amused by this crazy caucasian partner of mine!”

Anyway back to our story: Joe Marshall (Hannon) is recruited from the San Diego police force to bring the Katana gang down. His nickname is “Samurai” and apparently he studied with the masters in Japan. He speaks fluent Japanese, despite his inability to correctly pronounce Fujiyama’s name upon first meeting. The first action sequence is a horribly done car chase scored to a really bad approximation of one of Harold Faltermeyer’s themes used in Beverly Hills Cop

. Officer Peggy (Melissa Moore), piloting a helicopter, is called in to help spot the bad guys as they make a drug deal by the docks, but she never actually seems to do anything worthwhile. In fact, if you pay attention to the scenes on the dock, you’ll notice that there’s no chopper for miles. Where did she go? In any case, Joe seems to be on good terms with her, as evidenced by this little nugget of dialogue:

After a (thankfully brief) sex scene between Moore and Hannon, we are back with the gang again:

So, they call him “Samurai.” Is that what they call him? Anyhow, Fujiyama doesn’t like his henchmen getting captured alive, so he sends Yamashita to the local hospital to take the injured guy out. Krista Lane pretends to be a nurse, just “changing the trash” but hiding in that cart (somehow) is Yamashita, who collects the henchmen’s head by “sawing” it off with his katana blade. By the way, in case you are wondering:

So now you know. And knowing is half the battle, the “battle” being to keep from dying of laughter as you sit through this cinematic disaster.

Samurai Cop has a decent following, as is the case with many so-bad-it’s-good movies. A few key scenes show you why. The first one takes place in the hospital, where Joe flirts with a nurse. Why don’t we just let the scene speak for itself:

While you are digesting that, take a look at this other “classic” scene from Samurai Cop

, taking place in a restaurant where Joe and Frank harass the gang:

A few things occurred to me while watching Samurai Cop. The first was that every character (hero or villain) is incompetent. After the harassment in the restaurant, Yamashita actually follows Joe and Frank outside, and sends thugs armed with swords and guns to kill them, right in the parking lot! Then Yamashita pulls out a machine gun – remember, this is broad daylight behind a restaurant – and fires upon our heroes (he also takes out his own wounded men). So, first off, your gang isn’t going to last very long if you keep killing off your own men! That’s not really good for morale or recruitment, if you know what I mean. But it seems to me that Z’Dar takes out more of his own gang than the cops that are his mortal enemies. The other problem is that at this point, Yamashita has made himself a wanted man and every cop in the city should come down on him and the gang, but nobody does a damn thing. Instead, Joe and Frank go back to headquarters to get chewed out by their captain (Dale Cummings) who is just sick of their shit (with all the dead bodies piling up) and is very close to having a coronary. (Cummings’ performance is quite funny.) Then beefcake-with-hair visits Fujiyama’s blonde girlfriend Jennifer (Jannis Farley), tries to pick her up, and fails miserably. The scene between them is so very awkward, and the extremely strange lion’s head on the wall next to her (staring straight into the camera) doesn’t help matters. She resists his advances (“I’m busy with my restaurant… I have church on Sunday!”) and at this point Mr. Samurai Cop is looking like a creepy stalker (he confirms it when he actually shows up at her church).

From then on, Samurai Cop turns into a series of action set pieces, where the cops take down a gang member, and the gang tries to take out the cops, and the cycle repeats. There are gunfights after gunfights, and each successive one has a curious effect of inducing more ennui rather than excitement. You should understand that everything done in this movie – chase scenes, dramatic scenes, martial arts, shootouts, 80s electronic score – are done in the most amateurish way possible. Shervan basically takes an action scene – like a car chase or sword fight – and speeds it up in post to make it look exciting. He also has a curious habit of editing character conversations to make it look like a character is by himself, talking to the camera. It’s bizarre… and funny. Can you smell what Z’Dar is cookin’?

Speaking of dialogue, here are some classic lines:

Not to mention Joe’s entire restaurant monologue, the nurse flirting, his conversations with Jennifer, basically anything that comes out of his mouth. “Life is a hideous thing, and from the background behind what we know of it peer daemoniacal hints of truth which make it sometimes a thousandfold more hideous.”
― H.P. Lovecraft, The Road to Madness

What other pleasures can be derived from Samurai Cop? How about:

A few parting thoughts: Mark Frazer is actually not bad for what he has to do here (basically, play a version of Roger Murtaugh without the family trappings), and props to the movie for allowing him to survive. (Not only does the black character survive, but he actually kills the main bad guy!) Also entertaining is Dale Cummings as the captain, who constantly curses out our heroes (and anybody else who wanders into his office). When he doesn’t get the results he likes, he basically says “Screw it” and orders his men to kill everybody, and then turn in their badges! This is what it means to be an L.A. cop, I guess. Z’Dar is entertaining because… well, he’s Bob Z’Dar. As for Matt Hannon, his deer-in-the-headlights, bug-eyed reactions are one for the books (he’s basically Gowron as a human). He doesn’t have the charisma of a Reb Brown (God, did I just say that?) and I could have gone without seeing him in that speedo. (the eyes! they burn!) Anyway, I recommend Samurai Cop because it’s like watching one of those horrible Turkish or Bollywood films, except all the actors speak English (some, barely), they’re (mostly) from L.A., and there aren’t any musical interludes (but that probably would have helped). “Your katana is bigger than I anticipated!”

of Samurai Cop has interesting interviews with Robert Z’Dar, Gerald Okamura, and cinematographer Peter Palian. There is another version (this one?

) that is supposed to have a commentary track by Joe Bob Briggs on it.