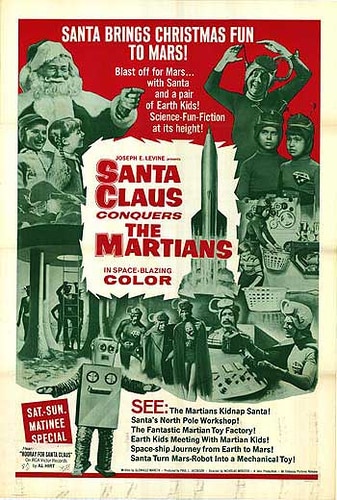 There’s some strange shit goin’ down at the pole tonight.

In the world of Santa Claus Conquers the Martians, Santa Claus is as real as you and me. He even gets interviewed on the news by some idiot freezing his ass off at the north pole but still manages to crack bad jokes. But earth kids aren’t the only ones watching Santa on the television – Martian children are doing it too!

Now, these Martian kids – they’re not very happy. They never laugh or play. Soon after they’re born, they are plugged into a machine that teaches them at blindingly fast speed. They have weird antennas on their heads. They’re kinda like The Borg, actually. Except goofier. But something’s wrong – they’re not eating. but apparently that didn’t help). By the way, Chochem looks like a crazy old wizard, sans dark Martian black-face and antennae. Nobody seems to notice or care. So the Martians go down to Earth to kidnap Santa. They ask two dimwitted kids (Billy and Betty) where Santa lives. The dimwits tell them, and then the dimwits are, of course, kidnapped along with Santa. Martian Voldar thinks the whole thing is a bad idea, that earth kids are nincompoops, and that Santa will corrupt all of Mars.

Well, he kinda has a point. Folks, it’s not a good sign when you find yourself identifying with the Martian villain. Even Martians can’t tear their eyes away from Honey Boo Boo!

Anyway, the kids escape and start wandering around the north pole looking for Santa’s workshop. “I’m cold” says little Betty. Yeah, probably because it’s something like 90 degrees below zero. But she’s a trooper – she’s wandering around in light clothes and not a bit of frostbite anywhere. After an encounter with a fake looking polar bear, they come across Torg, the killer Martian robot. It manges to grab them, but only because they basically stand there like deer in headlights looking at it while it walks slowly towards them. Not the smartest kids on earth, these two. Mars is so progressive, even the mentally disabled get equal opportunities!

Torg walks inside Santa’s workshop and immediately becomes a toy. Funny, the Martian guns seem to still work ok. But they don’t shoot rays or anything. They just make a “pop” noise and cause the person on the other end to act real still, like those stupid mimes you see in tourist destinations. The Martians finally make a getaway with Santa, Billy, and Betty in tow. The purpose of kidnapping Billy and Betty was to prevent Earth leaders from knowing who took Santa Claus. Too bad Mrs. Claus spills the beans, causing all of Earth’s forces to be sent after the Martians. But all of Earth’s forces don’t add up to much. The newscaster mentions Martians with the same matter-of-factness that he mentions Santa – like it’s common knowledge and not a blow whatsoever to people’s worldview, science, or religion. He also mentions that Billy and Betty vanished into “thin air”. Because both stories are equally important, you see. The United Nations convenes a special session. Nothing gets done. Ok, that’s pretty realistic. Then we’re treated to stock footage of United States armed forces taking to the skies. (the same footage used in Dr. Strangelove

But the Martians have a special weapon called a “radar box”. It’s supposed to jam radar, I guess. Too bad it looks like a hope chest. Oh, by the way, everything on Mars is in English and the Martians speak English too. Very convenient! The Martians have their own version of a village idiot, and his name is Dropo. Dropo is referred to as the “laziest man on Mars” and he’s certainly that, but I think he’s also the dumbest, the most inept, and the most annoying. If the king of Mars has a dude like Dropo in his group, you know you can sleep soundly at night, knowing that Mars is no threat.

Even the villainous Voldar, when finally exposed as an asshole and forced to hide in a cave somewhere, turns into a goofball. He’s teamed up with two other idiot Martians and the three of them pull a Three Stooges

act for the rest of the “film”. Unable to reach Santa, who is under guard, he manages to sabotage the Martian toy-making factory, thereby “discrediting” him. Damn Martian Luddites! Then he kidnaps Santa, but it’s not really Santa, but Dropo in a Santa suit. Voldar is obviously not smart enough to realize his Santa is a fake (Dropo’s antennae are still visible). And you still want to tell me Mars is a threat? In the end, Voldar is finally defeated by what we have to call “complete wackiness!” Basically, an assault by toys. Personally, I think the absurdity of it all is what beats Voldar. And us. The ending sees idiot Dropo as the new Martian Santa Claus, while Santa and the kids return to Earth. Before the credits roll, we are treated again to a truly insipid theme song with the (redundant) lyrics spelled out on screen so the slower kids can follow along.

Santa Claus Conquers the Martians was made in 1964, as some in-jokes will hint to you. (Santa mistakes one of his reindeer for Nixon and there’s a character based off of Wernher von Braun). You might have noticed the metaphor for Martians-as-Communists. Nothing a little Western television can’t cure. The best part of this movie is when children everywhere – Earthlings and Martians alike – are shown sitting hypnotized in front of the tube, completely immersed in the television world. Billy and Betty look at the Martian antennae and think that Martians are TV sets. Of course, why wouldn’t they? And you still think Voldar’s the bad guy, eh?

By the way, I am certain that the people who convinced child actor Pia Zadora to go on as a Martian girl are the same “handlers” who sent her over to Penthouse and The Lonely Lady

. Not that I’m complaining, mind you. Santa reflects on what he just put in every Martian’s stocking.