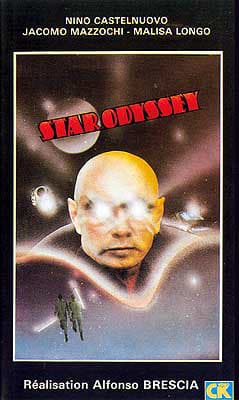 A long time ago, in a galaxy not far away enough.

There was once this Italian guy named Alfonso Brescia who began directing movies in the 60s. He started out in the sword-and-sandal genre, moved on to low budget spaghetti westerns, then war films, some gialli, even the bizarre Three-Supermen/Amazon hybrid – 1975’s Super Stooges vs the Wonder Women (a movie I must track down one day). But Brescia was to become infamous for the four 70s-era sci-fi films that were complete, shamless ripoffs of Star Wars

. These films were known as Battle of the Stars (1977), War Of The Planets

(1979). The fact that this guy cranked out 4 films within the span of 3 years reveals a certain carefree “attitude” on the part of the filmmaker, does it not? (You will get four Star Wars ripoffs and like them!) Oh yeah, he also directed Ator 3 (aka Iron Warrior

) which was not authorized by Joe D’Amato, who directed the other films in the series. But let’s not get off track – we’re here today to discuss Star Odyssey, an inept, hilarious piece of space trash that, if nothing else, establishes Brescia (who uses the pseudonym Al Bradly) as the Italian Ed Wood (well, at least until Bruno Mattei stole the crown). Star Odyssey takes place sometime in the future, when humankind first encounters an alien race, and tries to force their flying saucer to land. Big mistake – the flying saucer is run by Lord Kess (I have no idea which actor played him) who sorta looks like Doug Bradley’s Pinhead character without the pins. In a show of force, he destroys Earth’s military installations, as perfectly illustrated by the use of black-and-white stock footage (wow, that’s seamless editing!) At space headquarters (or something), the effeminate Commander Barr (Franco Ressel, taking his cue from John Breckinridge, who played the alien commander in Plan 9 From Outer Space

) orders Lieutenant Oliver J. Carerra (nicknamed “Hollywood”) to recruit the brilliant scientist Professor Mauri (Ennio Balbo) to help with their alien problem. Now, this “Hollywood” guy has the most ridiculous mustache I have ever laid eyes upon, and struts around with his fists pressed against his hips and his (small) chest thrust outward like some kind of Charles Atlas wannabe. He’s a big idiot, as established at the outset when he expects to shake an alien’s hand (this being first contact and all) even though they just tried to blow the aliens up. I’m guessing, though, that he was meant to be a throwback to the days of the Buck Rogers or Flash Gordon serials. The movie’s characters use him as an asset, but nobody really respects him; the military itself is treated as inadequate against the enemy and unable to adapt quickly enough. This movie is squarely on the side of the delinquents and those outside the system. Take Professor Mauri – he’s an advanced human with psychic powers who had a falling out with the authorities, but he agrees to help fight the aliens, as long as he can put his “old team” back together. To help him do this, he hypnotizes the by-the-book Hollywood (but my guess is practically anyone can hypnotize this guy). You’ll need to be smoking a lot to get through Star Odyssey.

The professor has a robot, which looks like a very silly union between Vincent from The Black Hole

and the Red R2 unit from Star Wars Episode IV

, except put together by kids and given silver oven mitt arms that dangle around like Tom Servo’s. The Prof also has a pretty niece named Irene, played by Yanti Somer (brilliant scientist with pretty girl related to him – there’s your Forbidden Planet

reference). Now, Yanti Somer has done a lot of Italian movies, but she’s actually Finnish. She did a western called Trinity Is Still My Name

, next to Terence Hill and Bud Spencer. And then she fell into Al Bradly’s casting couch and ended up in all of his space movies. Star Odyssey would be the second-to-last feature she ever did. I don’t know why, but if any movie would fast-track an actress into retirement, this one would be it. So Irene goes out collecting the old team. She first recruits Dirk Laramie (Gianni Garko) who looks like a guy from a Poliziotteschi movie (and I believe he did star in one). Dirk, like Professor Mauri, has psychic powers and powers of hypnosis. This is shown in his ability to win casino games, see through cards, and hypnotize people with glowing eyes. Dirk also goes through the movie wearing a Spider-Man shirt. Perhaps the movie ran over-budget on wardrobe, so Garko just brought his pajamas to work.