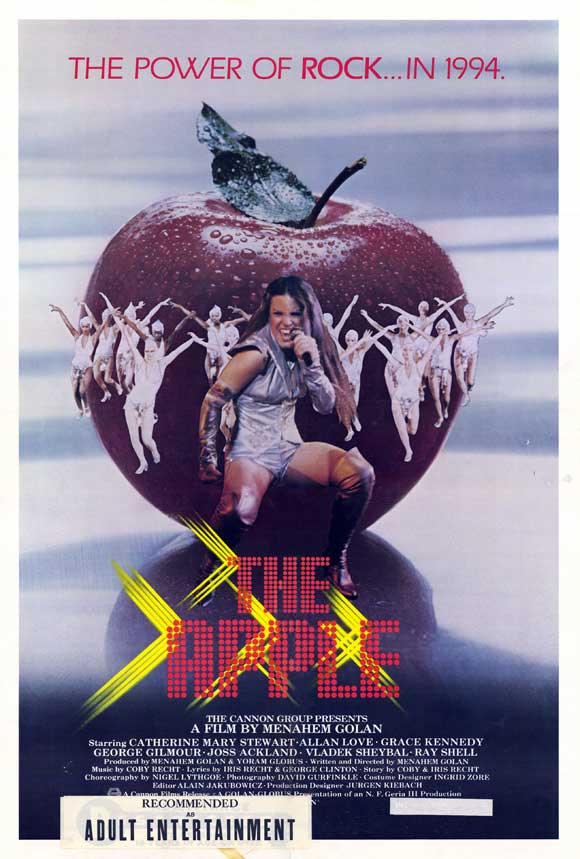 The Apple (1980)
Directed by: Menahem Golan
Starring: Catherine Mary Stewart, George Gilmour, Vladek Sheybal, Miriam Margolyes, Grace Kennedy, Allan Love, Joss Ackland, Ray Shell
One thing about bad movies is that every time I think I have seen the worst movie ever made, I come across something new that is so horrible, it reaches levels of badness I previously thought not possible. It becomes almost absurd, a Platonic ideal of awfulness – like the movie belongs in the dictionary definition or something. In a way, it has now made that movie a thing of wonder – something to cherish, even. The Apple is such a film. It is a film like, say, Zardoz, where somebody had a vision, and they gave everything they had to bring that vision to the screen, but didn’t realize that the vision was probably the result of bad sushi, and translating it to film should never have been attempted in the first place. And yet, paradoxically, I’m glad they did it because it elevates the movie into cult film status. Besides, what would I have to write about otherwise? And I’ll tell you something else – if you define “the worst movie ever made” to be something unwatchable, with zero value, then The Apple isn’t the worst movie. Not by a long shot. In fact, it may be one of the funniest movies ever made as far as entertainment value is concerned. I think its “badness” was unintentional (some might disagree), so that puts it on equal footing with movies like Ed Wood’s Plan 9 From Outer Space, a movie that is also horrible, but hilarious anyway.

Just another day at Goldman Sachs

To get into the right state of mind for The Apple, you must first understand Golan and Globus. Menahem Golan and Yoram Globus are Israeli cousins who bought control of The Cannon Group in 1979. They rose to the top by producing cheesy pics like Missing in Action, Revenge of the Ninja, Invasion U.S.A., and the immortal Breakin’ 2 – Electric Boogaloo. You get the idea. But Menahem Golan fancied himself more than a producer, and wrote/directed a bunch of films, including The Delta Force, and this surreal, ultra-campy “musical” about a young folk singing couple who get corrupted by a horrible, ubiquitous corporate/conglomerate that rules the world by putting out really bad pop/rock acts. Directed by Golan in 1980, The Apple takes place in the far future of “1994” where the world seems to have been mutated into a mixture of glitter, glam, disco, art rock, horrible singing, ridiculous lyrics, gaudy, garish fashions, etc… When writers don’t know how to predict the future, they end up taking every single style of the current period (in this case, the 70s), and mixing them all together into one toxic brew. It’s kinda like – if I was going to invent the future 15 years from now, I would mix together Lady GaGa, Kanye West, Rise Against, Modest Mouse, and Radiohead. (I would also throw in flying cars, but I digress).

Alphie (George Gilmour) and Bibi (Catherine Mary Stewart) are simple, honest folk singers from Moose Jaw, Canada (that’s in Saskatchewan if you want to know), who get their big break on the international musical contest called Worldvision. The first performers are Dandi (Alan Love) and Pandi (Grace Kennedy), who do this ridiculous pop/aerobics routine called BIM, which stands for Boogalow International Music, the giant corporation run by the evil, flamboyant Mr. Boogalow (Vladek Sheybal, acting evil and flamboyant). The lyrics go like this:

Hey, hey, hey. BIM’s on the way!
There’s only Power… BIM is the power!

There’s the typical call-and-response – Dandi sings “B!” (horribly) and the audience responds like robots (“I M !!”). There’s a lot of glam, flash, and oddly shaped instruments/fashion accessories (usually angular-shaped, triangles, etc. – It must be THE FUTURE!) Then Bibi and Alphie come on with their old-timey, folksy tune “Love: The Universal Melody.”

At first, the audience responds like rabid dogs (“Do the BIM!”) Then they calm down and start to get into it. Boogalow doesn’t like what’s happening, so he instructs his glittery assistant Shake to overlay annoying electronic noise on the speakers, completely fooling the audience into thinking Bibi and Alphie suddenly suck again. If the audience is this stupid in 1994 then they deserve to get it good and hard from light-on-the-loafers Boogalow. Come to think of it, in 1994 techno was very popular, so the audience should have loved that annoying, electronic noise, but I digress (again).

But Boogalow, seeing the potential in our lovebirds, dazzles Bibi into signing up with BIM. Alphie doesn’t trust Boogalow for a second, and who can blame him? It’s like signing up with a traveling circus of meth addicts.

Wow, they even correctly predicted Bjork!

So Alphie is reduced to trying to eke out a living making folk records nobody wants, living with an nice old Jewish woman (Miriam Margolyes) that he sometimes feels up for the hell of it…

Groping your kind Jewish landlady is all in good fun.

while Bibi goes glam and gets famous, churning out headache-inducing nonsense like “Speed.”

You see? Golan is comparing the excessive and fast-paced lifestyle of the United States with amphetamines! Brilliant!

Oh yeah, Dandi has also taken a liking to Bibi, telling her she’s made for him, in a Grease-inspired tune. But trust me – nobody’s made for this guy, and if somebody is, God help them.

Keep Reading about The Apple on Page 2