The 70s. Bell bottoms, disco music, skating, prog rock, and, uh… vans! What did it all mean? What was in the air that drove people to levels of insanity where they actually thought that having a van was the end-all be-all of super-coolness? One theory I have is that it was the weed. Another theory is… well, I don”t have another theory, actually. Set in some California beach town, The Van is a 1977 time capsule about a total dweeb named Bobby (Stuart Goetz) who wants to buy a van, with all the options, and by options I mean water bed, 8 track, TV, mag wheels, cup holder. Wow. The idea is that with this totally cool rad van he”ll be able to score with chicks left and right. 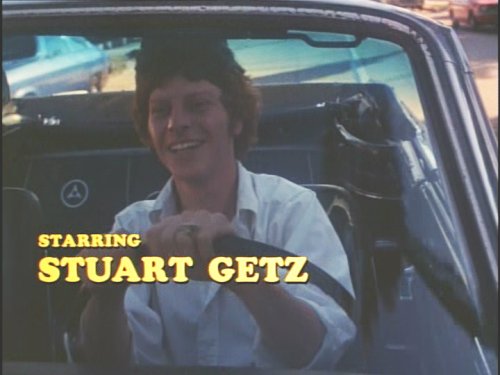 Get used to that mug, because he”ll be smiling through it like a goofball for most of the film. No matter what happens to this guy – and trust me, many degrading things will happen to him through the course of the film, he never loses this silly shit-eating grin on his face. Hey, man, it”s the 70s. What”s there to be down about? Anyway, when we first meet Bobby, he”s at graduation, pulling the rope that collapses the stage with people on it. Nothin like a good prank that breaks people”s limbs to get you on his good side!

Then we see him fantasizing about a hot blonde named Sally Johnson (Connie Hoffman), who kinda looks like a 70s version of Paris Hilton, except with a much hotter body.

Unfortunately, Sally is dating Dugan (Steve Oliver), who is an even bigger jerk than Bobby! Dugan is the kind of guy who works out, treats his woman like crap, and likes to beat people up for no reason. What a guy!

Next up, we see Bobby and his friend Jack (Harry Moses) trying to hook up with babes Tina (Deborah White) and Sue (Marcie Barkin). Sue gets it on with Jack in no time, because those two are totally mellow and cool, man. But Tina, the class valedictorian, is obviously way out of Bobby”s league, and is naturally repulsed by him. Nobody in their right mind would blame her.

Bobby works at the car wash where his boss Andy (played by Danny DeVito, before Taxi

!) operates out of his office as a bookie. Bobby has finally saved up enough money for his boss van, but before he can do that his co-workers run his Dodge convertible through the wash with the top down. No worries though (70s). When Bobby goes to get his van, he gives his graduation check to the salesman, telling him it”s “good as gold.” The salesman (done up in western style clothes) tells him “Nothing is as good as gold!” This guy would be right at home in today”s financial world – you know, cuz of the value of the dollar and commodities and whatnot. I don”t know, you might want to ask your financial adviser about that. On the way to get his van, Bobby slips on a banana peel.

The van sports all kinds of goodies, like: waterbed, mirrored ceiling, mag wheels, fridge, CB, 8 track, TVs.. And it says “Straight Arrow” on the side, because that kid Bobby”s a straight shooter, let me tell you. Later on, back at the car wash, Bobby decides to get back at his co-workers by pouring Castor oil in their beers. The results in a mad rush for the bathroom which is another classic slapstick moment! Haha! (Bobby tells them to “stay loose!”)

In one of the ickiest moments in The Van, Bobby shows his mom the van, including waterbed. Seeing Bobby”s mom resting on his van waterbed is something I could have done without. Later, he tries to pick up a few girls at the bar and strikes out. One girl playing pinball decides to go with him to smoke a joint but doesn”t take kindly to Bobby”s attempted rape.

The other girls Bobby gets into his van turn out to be prostitutes. Well, at least now we”re getting a bit more realistic.

Later that night, Tina shows up, and Bobby throws himself on her (“I know how you women get at night!”) This kid Bobby is a class act! The next day he stops by to see Sally, who actually seems to be into him. This is one of the most mysterious aspects of the plot, and you have a better chance of understanding quantum mechanics than understanding why this girl would be interested in Bobby.

Anyway, Bobby does finally manage to score later with a girl… who happens to have a backside big enough to generate its own gravitational field.

We are given insight into Bobby”s philosophy when he tells the girl “There aint a woman around who don”t love the sound of a zipper comin” down!”. Fat-bottomed-girl seems to agree with him, and she proceeds to make his rockin world go ’round.

Later on, Bobby talks about how “physical” lovemaking is while he”s taking a hair dryer to his busted waterbed.

Read More About The Van – Page 2