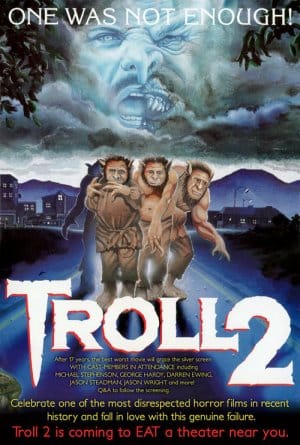 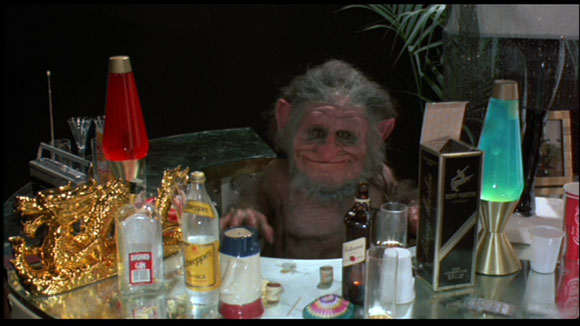 Before I turn you into a tree, can I fix you a martini?

Produced by Charles Band and Empire Pictures, Troll is a bizarre little film that takes its villain from Norse mythology and Scandinavian folk tales, although I guarantee you won’t confuse it with those stories, or anything from the world of Tolkien. Directed by John Carl Buechler, a makeup effects man who would go on to direct Friday the 13th, Part VII: The New Blood, it’s an underwhelming, mediocre piece of dark fantasy about a sneaky troll who slowly takes over an apartment building made up of 80s era malcontents, like yuppies, swingers, and Nam veterans. Into this building moves the Potter family, with daddy played by Michael Moriarty (a Larry Cohen favorite), mom played by Shelley Hack (who would appear in The Stepfather a year later), little girl Wendy Anne (Jenny Beck, looking like Heather O’Roarke’s lost twin), and her older brother Harry (Noah Hathaway). Yes, that’s right – his character’s name is Harry Potter, Jr, and this movie arrived over a decade before J.K. Rowling flooded the world with those damned books

. Now, did Rowling lift her Harry Potter character from a low-budget monster/fantasy flick from 1986? Maybe she did, maybe she didn’t, but besides the fact that this movie stars the late Sonny Bono as a swinger and features the debut of Julia Louis-Dreyfus playing a nearly-naked wood-nymph, the Harry Potter question is the most interesting thing you’ll take away from Troll. 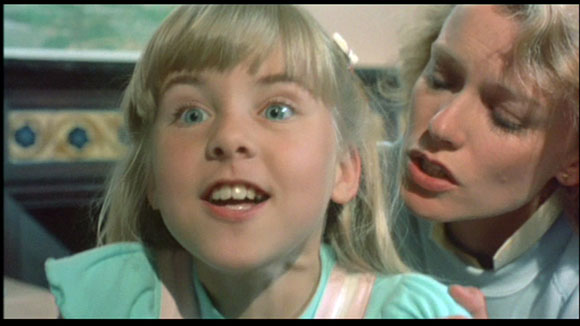 It’s not hard to see why Buechler might be a little annoyed, seeing a name he came up with used in a successful franchise, being that Troll creates a universe of magical faeries, ugly creatures, forests, a talking mushroom, and a witch played by June Lockhart of Lassie/Lost in Space

fame (and the younger version, which shows up in the last half hour, is played by her daughter Anne). The problem is that none of these things are delivered with any particular flair. At the beginning, little Wendy Anne chases her ball into the laundry room and is immediately captured by Torok the Troll (nice makeup), who takes her form. This turns cute Wendy Anne into a mean little brat who occasionally barges into people’s apartments unannounced to turn them into plants or elves or what-have-you. Harry Jr. immediately catches on, unlike his oblivious parents, and mistakenly thinks she’s an alien until his strange neighbor Eunice St. Clair (Lockhart) tells him about her former boyfriend Torok who lost a war long ago and became a troll. Now he’s back for revenge, unless Eunice and Harry can stop him. But in the end they don’t do squat – Eunice is turned into a tree, and Harry is useless against the giant monster at the heart of Torok’s magic – but Torok has developed an attachment to the real Wendy Anne (thanks to a stupid plot contrivance) and thus destroys his own creation to save her. It’s like spending all your time and energy building a skyscraper and then tearing it down because it blocked your view of the river. 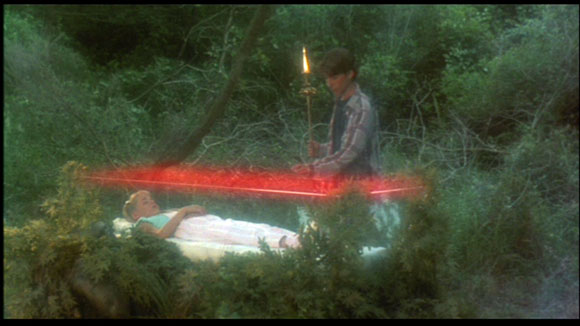 Forget it, Potter. Back to Hogwarts for another year

Acting is bad all around; characterization is composed of canned one-dimensional types – made obvious early on when all tenants meet the Potter family in one dumbest get-to-know-the-characters sequences I have ever seen. The only person to emerge unscathed is Phil Fondacaro, who at 3’6″, plays a dying English professor given a chance to realize a childhood fantasy of becoming an elf. In the movie’s defense, his short stature isn’t treated like a punchline, and his character is the only one allowed to generate any empathy. I also must give credit to the creature effects and the completely weird troll-song, the only thing truly eerie about the film. Oh, and that frightening dance number by Moriarty, or little Jenny Beck’s hilarious delivery of supposedly adult lines. Honestly though, you’re better off watching The Neverending Story

(which also stars Noah Hathaway), or – dare I say it – one of the “other” Harry Potter movies.

If Troll is run-of-the-mill bad, Troll 2 is outrageously bad – it makes the first film look like Lord of the Rings

. If you want to get technical, it’s worse than Troll in every way – effects, makeup, acting, plot, logic. But it’s also worse than most other films – making it one of the worst ever made (paradoxically, its very ineptness has made it a cult favorite). I’m not sure where to start with Troll 2 – how about the fact that there are no trolls in it, and the word “troll” is never spoken by anyone? This is a movie about goblins, not trolls, but I’m not sure if the difference between a goblin and a troll is great enough for one to care too much. (And I don’t care enough to research it). The movie was never meant to be a sequel to anything, but American distributors immediately understood what they were dealing with and scrambled to make it a sequel to somethin’, and the rest is history. If you are looking for more warning signs before taking on Troll 2, I will tell you that the film is directed by Claudio Fragasso, who worked on a lot of Bruno Mattei movies like Zombi 3

, and Hell of the Living Dead

(AKA Night of the Zombies). In other words – Grade Z filmmaking all the way. 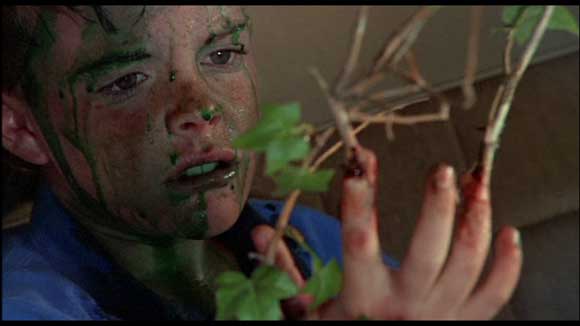 Troll 2 – The side-effects of being vegan!

Joshua Waits (Michael Stephenson) can communicate with his dead grandfather, Grandpa Seth (Robert Ormsby), who warns him of the goblin menace. Goblins like to trick humans into eating greenish-looking food items, turning them into plant-like things, which the goblins then consume “with a voracity than has no equal on Earth!” Joshua’s parents (George Hardy and a scary-looking Margo Prey) have made some house-swap deal with a family in the country, where they get to spend the upcoming weekend. Joshua’s sister Holly (Connie McFarland), wants her boyfriend Elliot (Jason Wright) to come along, but Elliot seems more interested in hanging out with his friends than with her (“You even take them to bed with you and I don’t believe in group sex!”). When the family finally gets to the town of Nilbog, they meet the Stepford-like family, who leaves them the country home and a dining room table full of greenish, unappetizing items that nobody in their right mind would try to eat, but the Waits family can’t wait to ravage the stuff. Fortunately, Grandpa Seth freezes time so that Joshua can figure out a plan, but instead of simply grabbing all the food and throwing it out, he urinates on it. His dad immediately chastises him for “pissing on hospitality.” When daddy undoes his belt, Joshua asks “What are you going to do, daddy?” He responds: “Tightening my belt one loop so that I don’t feel hunger pains.” That got a chuckle from me. Throughout all of this, nobody bothers to read “Nilbog” backwards, the dopes. 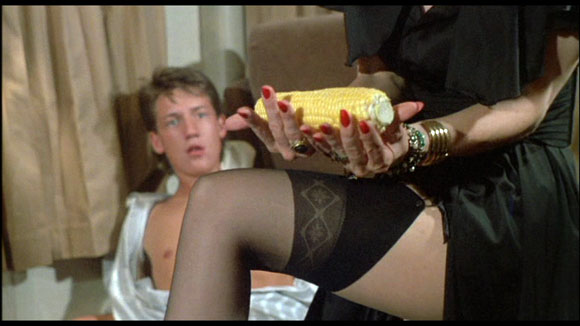 Mrs. Monsanto, are you trying to seduce me?

The rest of Troll 2 concerns the repellant goblin queen (Deborah Reed) turning Elliot’s friends into plants – one kid is “seduced” in a scene involving corn-on-the-cob and popcorn that must be seen to be believed – while Grandpa Seth occasionally pops out of the netherworld to hand Joshua weapons to fight the town goblins, like Molotov cocktails or a double-decker-bologna sandwich! Joshua manages to eavesdrop on the town preacher who rants against the evils of meat-eating; a store owner exclaims “We’re vegetarians here in Nilbog. Didn’t you know that? Here’s some Nilbog milk. Special milk. High in vitamin content. Here, it’s free.” When the townspeople/goblins trap the family inside the house, they fret over killing them violently (“It would be a shame! The blood would mix with the meat, and we’d have to leave it in vinegar for the whole night!”). Try not to concern yourself with the fact that the monsters are supposed to be vegetarians, which are whom Troll 2 seems to consider the real enemy. Fragasso covers everything in sickly green goop – there’s no ambiguity in how he sees the non-meat-eaters. Coupled with the fact that this movie was shot in Utah, features monsters who shun coffee, and has a bit of an anti-gay attitude, could this also be a movie about Mormons? No, but hey – at least I’m trying to keep you interested in Troll 2. 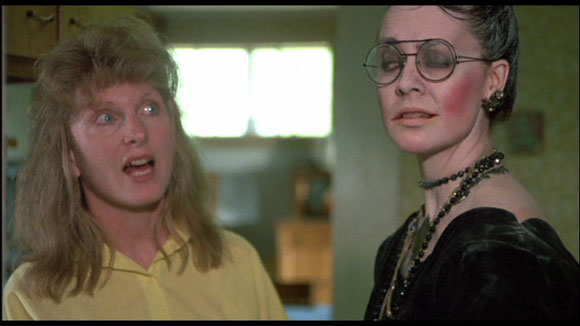 Quick! Pick the scarier one!

What else? There’s the protestation of Elliot that he’s not homosexual, and yet we see him sleeping shirtless in the same bed as his buddies, who also don’t seem very concerned with meeting girls, even though they give it lip service once in awhile. There’s the sequence involving a kid who isn’t visibly disturbed about meeting a group of goblins in the forest – there’s probably a subculture like that in every city, after all. There’s the inconsistency of Grandpa Seth’s powers – sometimes his ghost can’t stick around, other times he’s able to wield an axe pretty well. There’s “Nilbog Milk”, the use of which is never explained. There’s the tickling feeling that makes a victim giggle when Deborah Reed slices through his plant body with a chainsaw – oh, and she also gets her power from Stonehenge! There are the stupid costumes designed by Laura Gemser (yes, from the Emanuelle

movies). I have read reviews from people suggesting that Troll 2 is like an infectious disease that they are compelled to pass on to others – that’s a metaphor I cannot argue with. For these reasons, I find this “sequel” much more entertaining than the original Troll, but then again I find bad movies to be a source of endless amusement. So how does this movie compare with such cinematic brilliance as Manos: The Hands of Fate, Plan 9 From Outer Space

, or your typical Uwe Boll movie? I don’t know – that’s like comparing goblins and trolls.

Troll and Troll 2 are availalble on a double-DVD

from MGM, both in widescreen. Troll 2 has also been re-released by itself (another thing sure to piss off John Carl Buechler), which is in both DVD

editions (the Blu-Ray has DTS sound, so now you can really hear those goblins munching down on human/plant victims). Troll 2 was also good/bad enough to inspire a feature length documentary called Best Worst Movie

, starring Troll 2 alumni Michael Stephenson and George Hardy. I also recommend checking your local indie theater listings from time to time – if you are “lucky” they may decide on a showing of Troll 2 one day (it’s kind-of a cult phenomenon now). 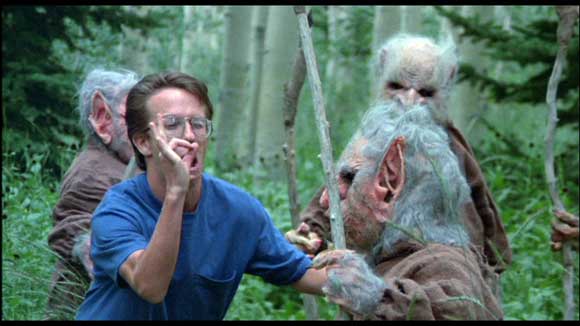