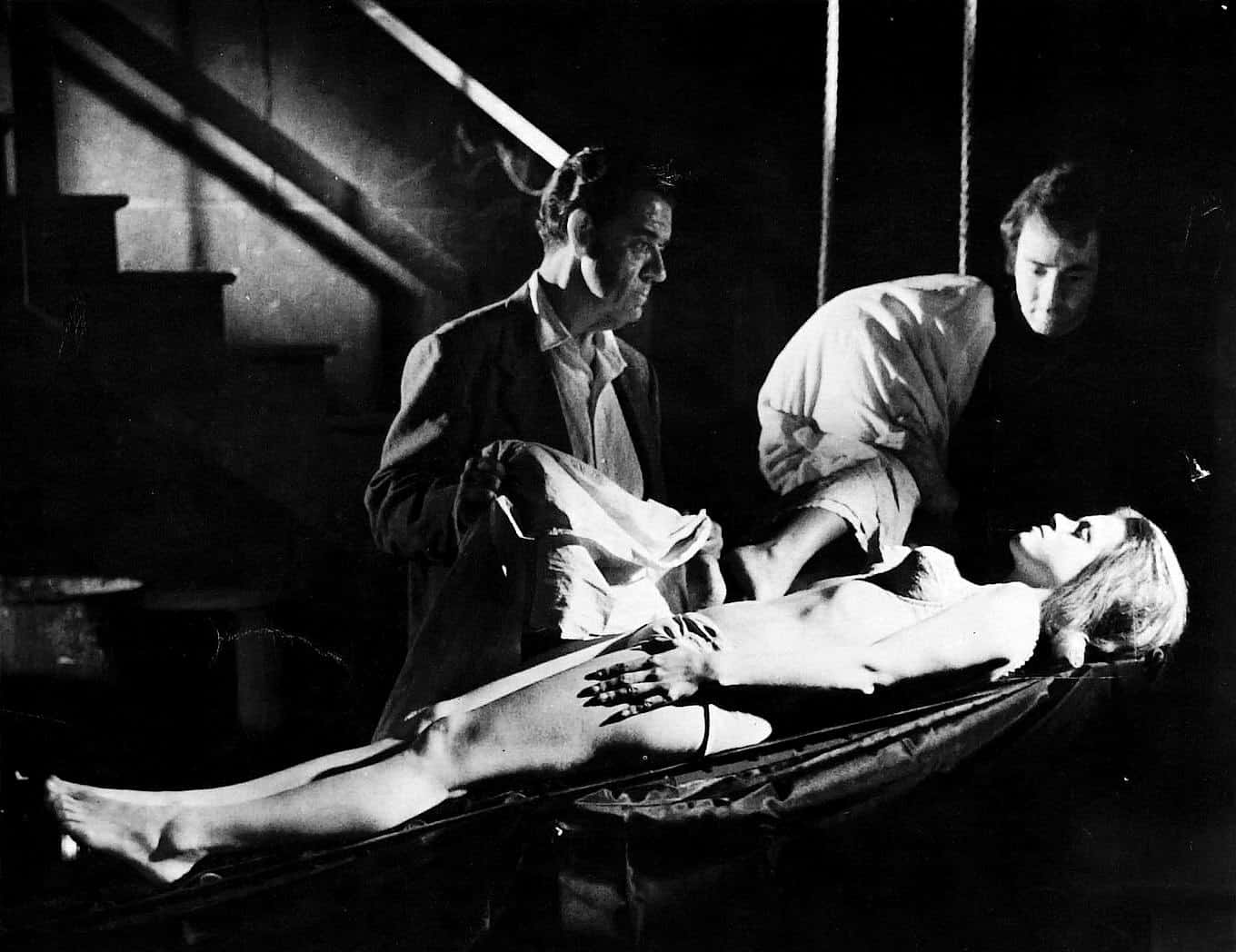 As is often the case with maverick exploitation director Ted V. Mikels, he comes up with a great title and wonderfully lurid poster image, then goes off and makes a really schlocky horror movie with lousy makeup effects. The best you can say is at least this one’s funny on purpose.

It’s a silly little gore comedy that stars Sanford Mitchell and J. Byron Foster as the owners of a cat food firm who find their sales booming when they accidentally turn a sleeping partner into cat food.

The diabolical duo soon realise that eight out of ten moggies prefer human nosh to the same old pilchard or tuna mix, and the only problem they then face is how to maintain a constant supply of human hamburger without alerting the authorities. To this end they employ a sleazy grave-robber and a house strangler, and before long their canned product (sold with the ad-line, “For cats who like people”) is a market leader.

Unfortunately for our entrepreneurial heroes, veterinary doctor Sean Kenney and his nurse Monika Kelly become suspicious after seeing a number of harmless domestic cats who have turned viciously on their owners. Wondering why normally placid pussies have become distinctly tigerish, the undercover vets soon track down the horrific reason: the cats have been turned on by the taste of human flesh.

Captured by the killers before they can spill the beans to the cops, Kenney and Kelly seem to be the next candidates for pet mince. Can they escape ending up on a shelf in the local supermarket?

Made on a perilously low budget even for Ted, the movie’s corpse grinding machine is little more than a painted cardboard box. The bodies go in one end and emerge as hamburger meat, pink coloured for girls and brown for boys!

When the film was released to UK cinemas (on a value-for-money double bill with Antony Balch’s Horror Hospital), it was shorn of most of these sequences, showing that the British censor has little sense of humour. A new DVD release from 88 Films restores them.

The film marked the screen debut of Steve Barkett, an actor-filmmaker who would go on to direct and star in the post-apocalypse feature The Aftermath, produced by Mikels. Barkett is seen very briefly here as a wino who ends up as cat meat. Mikels also edited and composed the music score, so he has to take the full blame, which he seems happy to do, since it was his biggest box office hit and has gained quite a cult reputation over the years.

He’s got nothing to be proud of though. Generally inept in every way, the film has plenty of Ed Wood-style acting and dialogue, and the sets are equally shoddy, looking like they are going to fall apart at any moment.

It’s at its best when Mikels concentrates on the more solidly built female cast members, many of whom are seen cavorting in sexy lingerie. It’s obligatory for the victims to be stripped down to their undies before being fed into the hamburger machine, and we can just count ourselves lucky that this was all just a demented fantasy of Ted’s, with no basis in reality, otherwise the government may be having to explain away an outbreak of Mad Bimbo Disease by now!