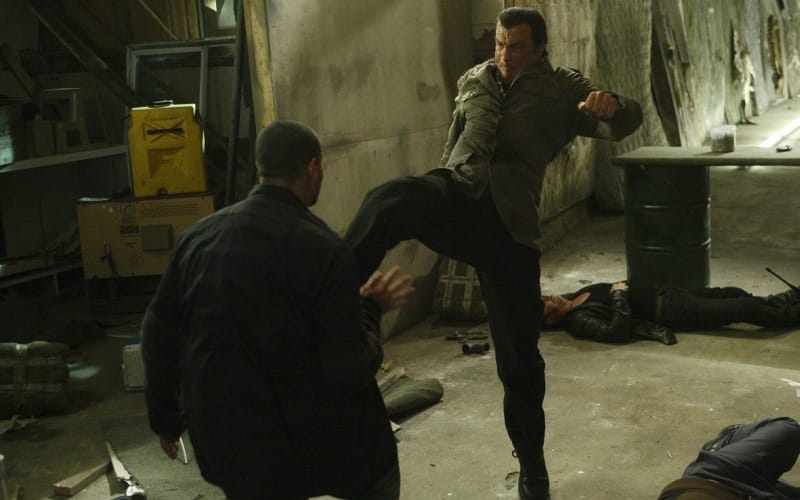 Say what you like about Steven Seagal, the man is a bad movie legend. Industrious, too; by the time he made Driven To Kill, the pony-tailed slow-fu legend had gotten so busy that he had to be driven around killing people rather than doing it the old fashioned way, by foot.

The original title of the film was Ruslan, which is the name of the character that Big Steve portrays, a real hard nut who smacks a bloke’s nose flat into his face just for bumping into him in a bar. Spill Ruslan’s pint and you’re going to be wearing your bum for a hat. One of the bad guys sums his act up most eruditely when he says: “This f#@king guy’s crazy!” But is he as crazy as us when we keep renting his movies? We doubt it.

As always Big Steve is a man of few words, most of them inaudible. He wears his usual big leather coat and the spray-painted hair has got blacker over the years. As reformed Russian mobster-turned crime novelist Ruslan Drachev, he starts off speaking in a weird kind of Russian accent, which disappears and then comes back again at random. Everyone who meets him seems to say, “Don’t I know you from somewhere?” But they don’t finish the sentence with… “You’re like that bloke from Under Siege, only fatter.” Not if they know what’s good for them, anyway. The plot has Steve returning to his old urban stomping grounds to celebrate the wedding of his daughter, who is getting married to the milksop son of one of his most hated former rivals. He doesn’t want any trouble, but puts a couple of punk bystanders in the hospital just to prove the old slo-fu skills are still there.

This is the kind of movie where the moment you meet a character you know whether they are a nasty bastard or a victim in waiting. The slimy Defence Attorney who is his ex-wife’s new hubby is obviously both. As is Steve’s hard-faced rival, who shoots the ear off one of his henchmen when the unlucky lad screws up.

Anyway, the wedding doesn’t go off as plan because a bunch of mobsters turn up and murder his wife, leaving his daughter barely clinging to life. This is not a wise thing to do, even to an overweight Steve. The camera closes in for a Sergio Leone-like close-up of his bulging eyes and he looks like Boris Karloff in The Mummy, only meaner. “Those who did this will cry tears of blood,” says someone. No s#!t, Sherlock.

He manages to persuade the lady cop in charge of the case to pretend that his daughter is dead, and then sets out on a revenge trail that leaves bodies everywhere. Most of the action involves very loud gun battles where the baddies fire a million bullets from about three feet away and miss Steve, who somehow manages to duck his huge bulk behind something. Then when they’ve had their go he jumps up and shoots back, making every bullet count. They always manage to run out of ammo at the same time so that the main baddie of the bunch can take on Steve in hand to hand combat the inevitably ends with said punk getting his own balls for earrings. The use of music in this film is a hoot. One of the big fights has really loud heavy metal going on, but mostly we get some kind of crazy Russian polka, which adds an unintentional comedy element.  We’ll pass on buying the soundtrack album, which is probably only available on cassette anyway.

In his pursuit of vengeance Steve goes to a sleazy night club, where he and the bad guy’s son share a private room with a stripper just to put a bit of sex into the proceedings, though our hero looks like he’s really embarrassed about being there. “This place has lots of interesting bad guys,” he says. Then they turn up and he kicks their goolies into orbit.

The big showdown is reserved for a strangely under populated hospital where the daughter is being guarded by the cops. The Russian mobster turns up er, mob-handed, and Seagal despatches his goons in best Die Hard style, eventually going mano-a-mano with his old arch enemy. Steve was probably sitting on the sidelines typing his latest novel while this was going on because it’s obvious a stunt double has been employed. It should be noted, however, that he does actually run in one scene, for a good ten seconds anyway. We’ll be back soon with a review of Steve’s next film, Driven To Burger King.