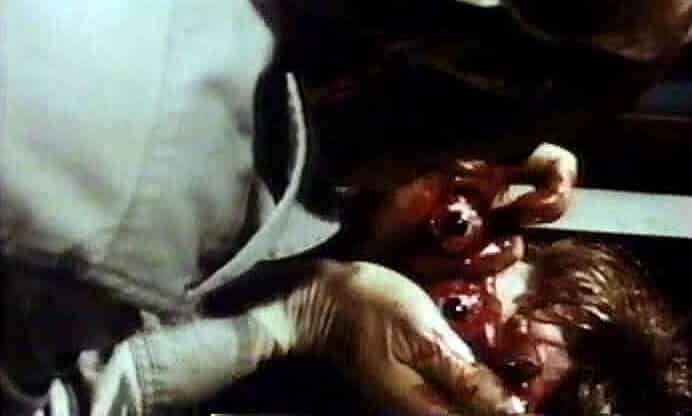 The setting is Poverty Row, New York City, and down-on-his-luck artist Bo Brundin desperately needs $65 for his rent. He sneaks into a neighbouring woman’s apartment and rifles through her handbag while she sleeps. But she wakes up, a fight ensues, and he has his eye poked out with a spoon – leading to some arty-farty red-tinged pov shots as he staggers down a fire escape and collapses in the street with his eye resting on his cheek.

This doesn’t do much to aid his already disturbed state of mind, and he promptly turns into a serial killer with a patch over one eye. He then keeps an eye out (sorry!) for his pretty female victims on the street, kills them, and hangs their eyeballs from the ceiling in mobiles or utilises them in his works of “art,” soliloquising: “I pray, I pray that those beady little eyes will catch sight of my work.” It works out well for him actually, because he opens a popular art shop on the strength of it.

His latest victims are a pretentious couple who make fun of his “art.” Following them home, he sets about them with a hammer, brutally bashing them over the head. After sipping a glass of red wine, he leaves covered in blood.

On the way home he’s approached by a hooker who not very sensibly invites him back to her apartment to clean all that blood off. He selects a wicked-looking carving knife from her kitchen and inserts it in her throat, bundling the body into the bath. Later on we see him surveying a newspaper headline saying “Police Baffled. Eye Killer Slays 14th!”

In a misguided attempt to inject some documentary realism into the film, there’s a daft vox pop sequence with a TV interviewer waiting outside of the hooker’s apartment for the body to be brought out. Buttonholing the detective in charge of the case and asking him if the cops know who they’re looking for doesn’t yield a very encouraging reply. “God knows,” says the harassed-looking lawman, scratching his head. “Some kinda pervert, demented, I don’t know…”

But our boy has been disturbed while in the process of gouging the eyes out of the hooker, so he returns to her grave to nab the other one – and finds the detective waiting for him. The cop pulls a gun on him, but the maniac overpowers him and knifes him to death. So much for the thin blue line.

In the end, fate steps in to settle the lunatic’s hash. He chases a pretty blonde into a meat freezer and relieves her of her baby blues, only to find that he has been shut in. When the butchers come to open up the next day they find him frozen to death. Dead meat.

The film might have been okay if the effects weren’t so poor and the acting so appalling – and the slipshod standard of the filming makes you wonder if the director might have been afflicted with a touch of eyesight trouble himself!
Terrible seems too mild a word for it.

Available from Amazon as part of Full Moon’s Grindhouse Collection.