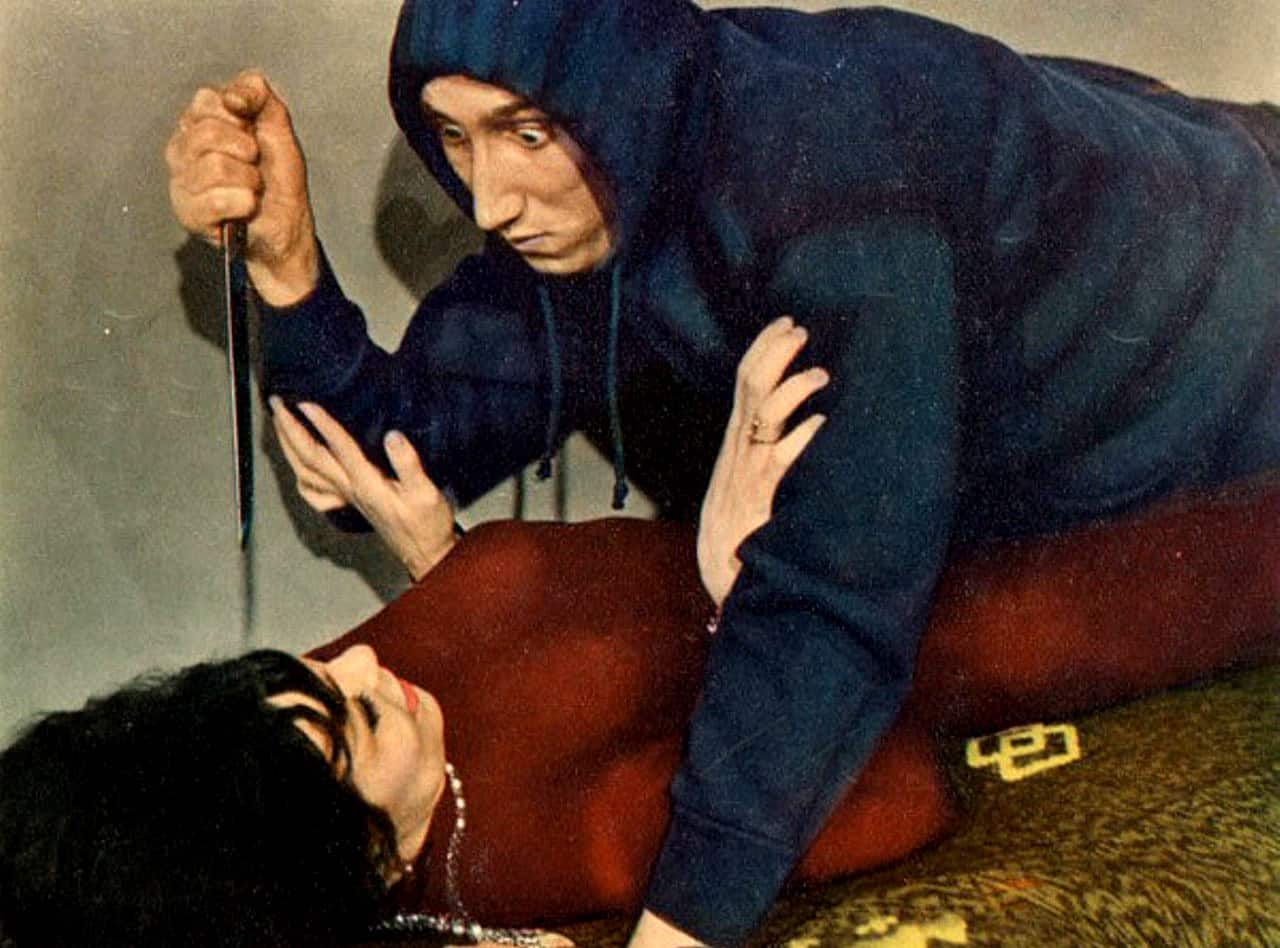 One of the longest titles in movie history, and also one of the silliest, this film is fairly representative of the laughably bad work of the late Ray Dennis Steckler, who worked as a cameraman for Universal until as legend has it he was fired for knocking something over on set and nearly injuring Alfred Hitchcock!  Incredibly Strange Creatures was clumsy Ray’s first film as a director and was made for a bargain basement $38,000 with his then-wife Carolyn Brandt as the star. Spotting a gap in the market almost as wide as the gap between his ears, his ingenious idea was to stage the world’s first zombie musical, and to film it in “hallucinogenic hypnovision”. That’s a hypnotic spiral that crops up on screen from time to time.

Brett O’Hara is Madame Estrella, a gypsy fortune teller in a low-rent carnival who talks like Bela Lugosi on helium and has an ugly wart on her face, which mysteriously changes position from scene to scene. When men turn down her advances she chucks acid in their faces and locks them in a closet. That’s how things played out in the dark days before match.com. Madame Estrella has a much sexier sister Carmelita, a most ungainly stripper played by the aforementioned Carolyn Brandt. She also employs a hideous chain-smoking hunchback sidekick Ortega (Jack Brady) who assists her in disposing of bodies, grabbing innocent victims and making the coffee. But he has to have the odd day off to replenish his stock of filter tipped Camels or he gets the hump, so Estrella hypnotises a gormless lad named Jerry – played by Steckler himself under the pseudonym of “Cash Flagg” – to deputise and kill anyone who dares to criticise her crystal ball readings.

Impressively, Steckler is an even worse actor than he is a director, his goggle-eyed stare provoking big laughs as he sidles toward his victims, big shiny butcher knife in hand. Looking disconcertingly like a drunken Nicolas Cage, he could also be the first “hoodie” psycho in movie history – even David Cameron wouldn’t want to hug him. The blood-curdlingly sickening scenes continue as American idol and singing sensation Don Snyder takes to the ramshackle stage to deliver his big hit and signature tune “How Do You Stand With My Heart”. When Jerry storms the stage with murder in mind, we can only applaud.

The hilarious finale sees our hypnotised hero getting an acid face wash from an ungrateful Madame Estrella. Then the putty-faced zombies get loose and Estrella cops it along with her leggy stripper sister and poor old out-of-puff Ortega, who can’t run fast enough to escape them with that pillow stuffed down his back.

These zombies may be mixed-up bunch, but the cops who arrive on the scene minutes later don’t offer them any counselling. They just do what any cop would do when confronted by a bunch of guys staggering around in rubber masks – blast away at them with toy guns.  They then chase Jerry across a rocky beach as he stumbles, falls, gets up again, and repeats the cycle until he finally cops it. You could probably make a brew while the final chase is on and get back to see the end of it. There’s really only about fifteen minutes of story here, padded out with dire musical numbers (such as “The Mixed-Up Zombie Stomp,” “It’s Not You,” “The Pied-Piper Of Love” and “Scook Out Of Shape”) which all sound like they were recorded in a wind tunnel, and some of the worst dance routines ever committed to celluloid.

Amazingly, however, the movie turned a tidy profit for Ray because he had the bright idea of taking it on the road with a unique gimmick: at the end of each showing he had actors dressed in rubber masks and brandishing plastic knives invade the audience. Sadly, no cops ever turned up to shoot the lot of them.