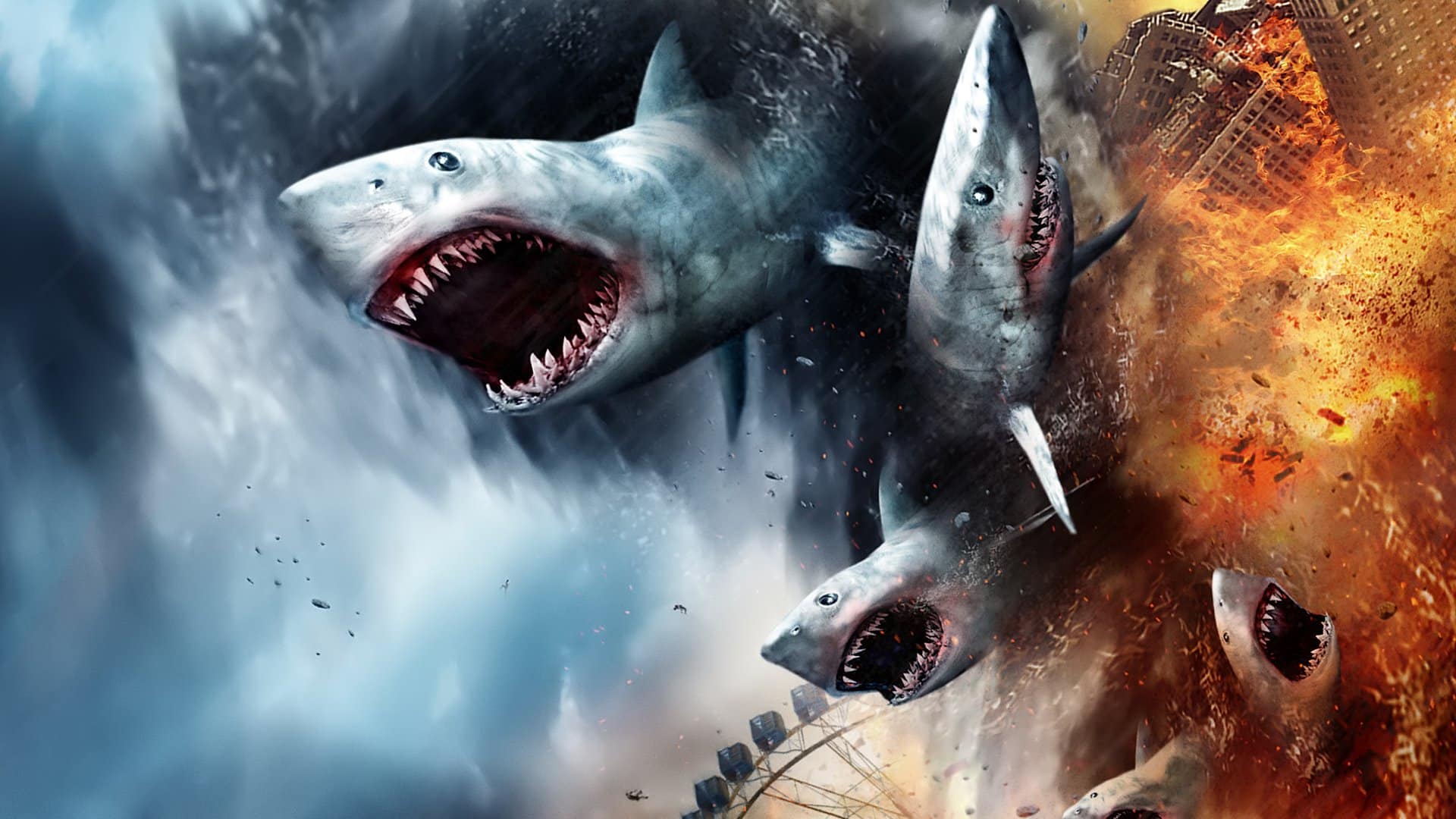 It’s a general rule of thumb that movie sequels are never equal to the original, but when that original is as hilariously bad a movie as Sharknado, then it’s impossible for that sequel to jump the shark so to speak… it has nowhere to go but up.

The perils of climate change are again front and centre in Sharknado 2: The Second One, which is actually a much more fun movie than the original, though equally as daft. The opening scene sets the ludicrous tone nicely. If there’s anywhere that you might consider yourself safe from a shark attack it’s in a Boeing 747 aircraft flying well above the clouds, but the hero of the first film, Fin Shepard (Ian Ziering) is still in a state of high anxiety.

Mind you, with Robert (Airplane) Hays as the pilot, he may have a point.

His former wife April Wexler (Tara Reid) is his co-passenger, and she tries to calm him down and start to have some fun now they are heading to New York. “Two of my friends were killed, I almost destroyed Los Angeles and I got eaten by a shark,” he says. “How much fun do you think that was?” Fair point, actually.

Then in a direct pinch from the classic Nightmare at 20,000 Feet episode of The Twilight Zone, Fin spots a shark flopping about on the wing of the plane. Nobody believes him of course. They didn’t believe Bill Shatner either.

He has the last laugh though, as the plane is soon right in the middle of a wild and wacky CGI sharknado. Both pilots are snacked straight out of the cockpit and purple-haired stewardess Kelly Osbourne loses her head. April gets her hand bitten off while hanging out the plane door taking pot shots at the flying fish. Serves her right, really.

It remains for our hero to grab the controls and bring the 747 in to land explosively but safely at JFK airport. Who would have thought that a surfer bar owner would know how to pilot a jumbo jet? The passengers are screaming wildly one moment, smiling and clapping the next. All apart from April, who now only has one hand. Safely on the ground, Fin tries to warn a bearded, bespectacled and rather effeminate New York policeman (comedian Andy Dick) that the events of the first Sharknado, a hurricane-related waterspout bringing shark-infused-flooding to the city streets, are about to repeat themselves in the Big Apple. “I can see you’re upset,” says the caring cop, looking like he’s about to offer to come round and redecorate Fin’s apartment.

April has gone off to the hospital to get a prosthetic limb fitted, and she’s worried that the sharks are targeting her personally. “It’s like he knew who I was”, she says of the one that attacked her. Surely everyone knows who Tara Reid is? Ever sympathetic, Fin tells her, “We’re gonna get past this.” Then he delivers the zinger: “The next time you offer to lend a hand, don’t be so literal about it.” She doesn’t return his high five.

This kind of groanworthy dialogue is all part of the film’s cheesy charm, and there’s plenty of it, but the key to Sharknado 2’s success is that everybody plays it absolutely straight, no matter how implausible things get on a minute by minute basis.

As for the plot, well it’s like that of the first film but amped up to eleven. This time there are two (count ‘em) sharknado twisters, and if they merge together then it will create the perfect shark storm, or to put it another way, a sharkopalypse. Can Fin and April stop it and pave the way for Sharknado 3? You betcha.

First of all our hero has to save his nearest and dearest, including old flame Vivica A. Fox and his brother-in-law (Mark McGrath), who has gone to a baseball game at a park right next to the river – I bet they get a lot of lost balls. Meanwhile, Fin’s sister (Kari Wuhrer) – who’s named Ellen Brody! – tries to keep her daughter and assorted pals from becoming shark bait. Also along for the ride is Judd Hirsch, a genial New York taxi driver with a wooden leg. Hirsch was of course the star of TV’s Taxi.

The playful, anything goes feel of the piece is evident from the start and culminates with Fin hopping from shark to shark the same way as Roger Moore negotiated alligators in Live and Let Die (though without the raised eyebrows). Swallowed by a giant shark he chainsaws his way out, striking a Bruce Campbell Evil Dead posture in the process.

The New York setting allows for some CGI fun with the local landmarks. We get to see the decapitated head of Lady Liberty bouncing down the streets of Manhattan, and since everybody knows the sewers of the Big Apple are full of giant alligators, they join the sharks in chomping on innocent subway bystanders – leading to the tempting prospect of an Alligatornado movie in the future. Get on Twitter now and demand it.