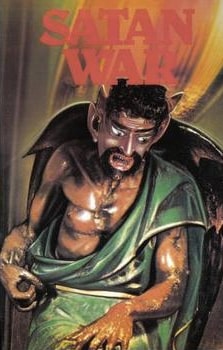 This glorified home movie opens with weird synth music, red-splashed abstract paintings, and a sober narration that informs us: “The film you are about to see is based on real events that have taken place in the world of the supernatural. The order and sequence have been changed in some instances for dramatic emphasis. But each supernatural occurrence depicted in this film has its origin in fact. Only the names and places have been changed to protect the innocent…”Hmm. I wonder if the director changed his name as well?

With that out of the way, prepare to be haunted by the tale of “Louise and Bill Foster.” She’s a public school teacher and he’s just a regular working Joe with dubious taste in bri-nylon shirts. The two of them are over the moon at being able to move into their dream home in the suburbs, but the narrator is about to piss on their chips, so to speak. “The purchase price was just too reasonable,” he teases. And from his doom-laden tone we know they are about to discover something even more terrifying than rising damp…

Sure enough, disaster strikes even before the boxes are unpacked. “Bill and I just had our very first argument,” sighs Louise. But even worse is to come. A crucifix the couple place on the wall turns upside down. There’s a knock at the door, but nobody is there. A coffee pot boils over and disgorges what looks like congealed blood, while thick green slime pours from the fridge. Then a kitchen chair knocks Louise to the floor, and she is groped by an invisible entity. “I think this house may be haunted,” says Bill. Doh!

The couple take a trip to the seaside to discuss the story so far. Louise reveals she has been molested by an unseen entity, and Bill strokes his chin thoughtfully. Maybe there’s a way he can get a reduction in the mortgage. Back at the house, that cross is spinning round on the wall like a catherine wheel, and the couple turn to a lady psychic friend for advice. “These are not just discarded spirits that are displaced and lost,” she says. “These are demons.” And a straightforward eviction order isn’t going to cut it, mustard-wise.

The psychic explains that the last occupant was driven to suicide by the demons, but the worst atrocities were committed in the kitchen – and she’s not referring to the ghastly flower pattern wallpaper. Mass slaughter took place just in front of the dishwasher. But even after hearing this the couple decide to stay, and it’s only when a hooded spectre enters the bedroom carrying a huge carving knife that they decide to look for other accommodation.

That’s your lot, really. But obviously aware of the fact that they’ve short-changed the viewer, the makers supplement the tape’s running time with about half an hour of extremely boring footage of a voodoo ceremony. Well, it’s black people dancing to bongo drums. Don’t ask why, just hit the stop button.