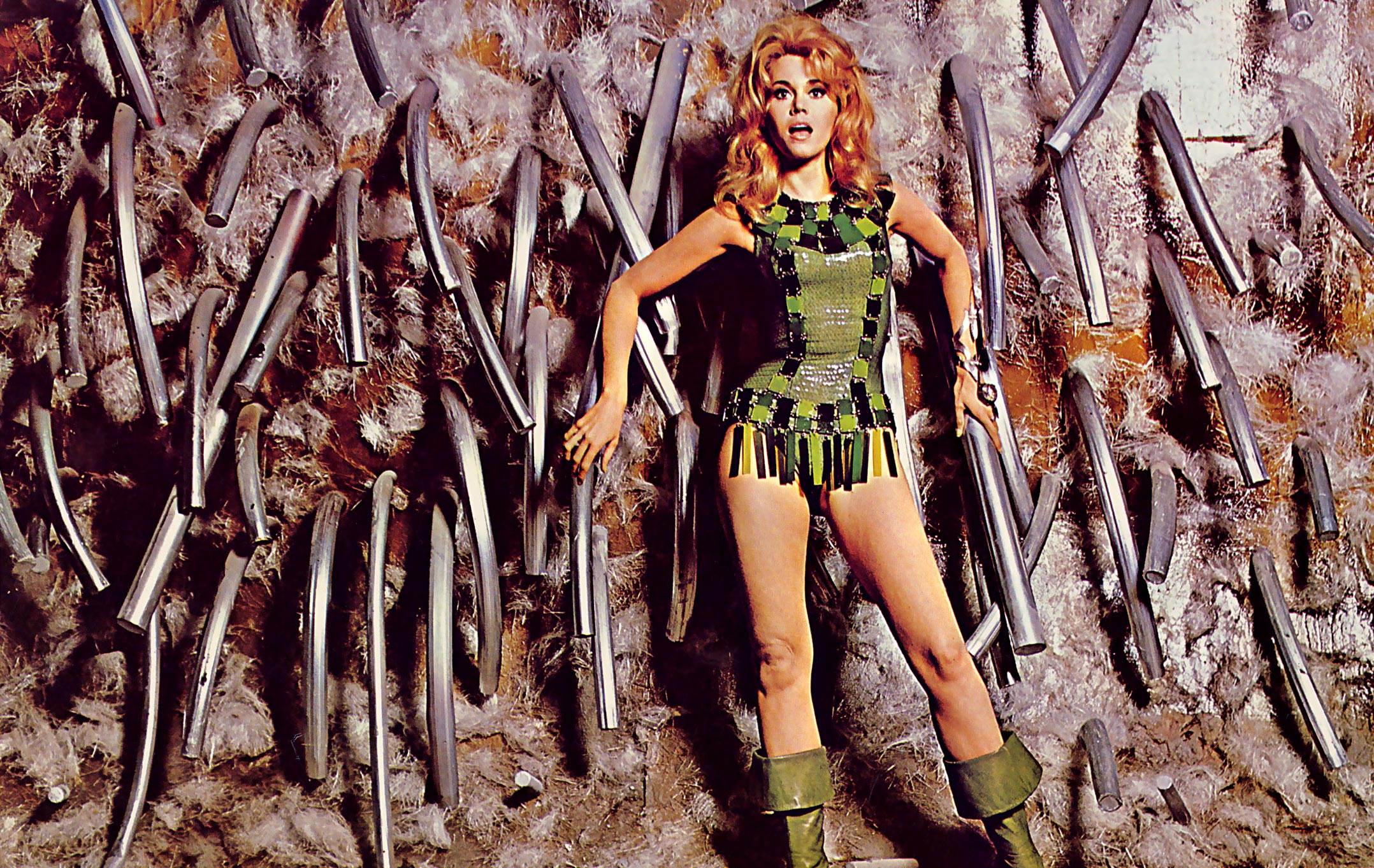 Space. The final frontier. Who knows what lies beyond the barriers of our universe? Don’t ask me – I can hardly navigate my way through the drive-in at my local McDonalds. It’s a subject that has fascinated moviemakers for many years now (space, not Maccy Dee), and particularly those who deal in the area of what we at this website might fondly refer to as the low-budget quickie.

These enlightened souls believe that man will one day travel among the stars, where he will probably discover a race of big-busted Amazon ladies, who will immediately strip off their clothes and jump all over them. This is nice work if you can get it – but is it enough justification for spending five thousand billion dollars on the space programme? We say yes, actually. 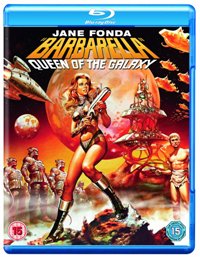 The first space girl to make an impact on me was Jane Fonda, working out in zero gravity to some really groovy 60s music under the main titles of Barbarella [Buy HERE] Piece by piece she removed her space suit until you could see bits of her that film stars weren’t supposed to have. The sight gave me such a thrill that I almost put my name down for the space shuttle there and then. The film itself wasn’t so hot; it was a silly comedy directed by Roger Vadim (then Jane’s husband), and told of 41st Century bimbo Barbarella’s various misadventures rescuing scientist Duran Duran (yes, the group did take their name from this character) and saving the universe from a fate worse than a sequel. 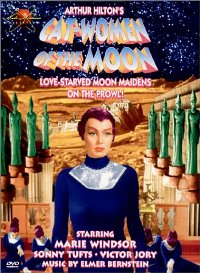 One of the most memorably lusty space voyages was undertaken in 1953’s immortal cinema classic Cat Women Of The Moon [buy HERE], where intrepid rocket ship commander Laird Grainger, played by Sonny Tufts (now there’s a name to conjure with), crash-landed what looked like an intergalactic dustbin into a moon made of cardboard rather than green cheese. There he discovered a large amount of pussy…cats, so he blasted off a bit smartish and the titles came up as he went into a wholesome clinch with navigator Helen Salinger, played by Marie Windsor. 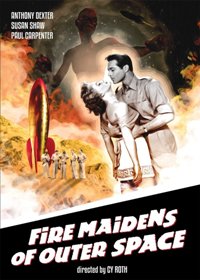 The male fantasy of visiting distant worlds populated exclusively by gorgeous, man-hungry females also served as the basis for the unforgettable Fire Maidens from Outer Space [buy HERE] a film so bad that people have been known to walk out when it’s shown as an in-flight movie!

This time, it was instant has-been Anthony Dexter who pranged his tinfoil spacecraft on the surface of the planet Jupiter and found a number of hotcha starlets wearing skimpy bathing suits and dancing to the music of Borodin. When not doing this or casting lusty glances at Dexter, the fire maidens lay around in pools of lava getting all steamed up – these chicks were really hot stuff. Fortunately, a lumpy faced monster in tights appeared to create a diversion and let the lads escape back to earth, where they all had a jar in the pub and no doubt slagged their agents off something rotten. 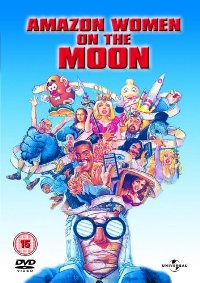 Another version of this plot turned up in the sexy sci-fi spoof Amazon Women on the Moon [buy HERE], which saw the usual bunch of blundering astronauts getting drawn into the clutches of a well-endowed Amazon queen (the bounteous Sybil Danning) and being subjected to her lustful advances – a prospect that seems to me to be far from daunting. This one tried to be funny but, surprisingly, turned out to be a lot less of a giggle than the unintentionally hilarious movies it set out to parody. 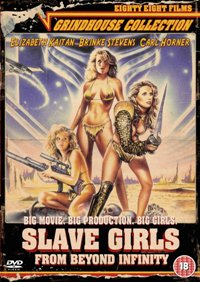 Our exploration of some of the steamier spots in the galaxy continues with the intellectually stimulating Slave Girls from Beyond Infinity [buy HERE], which has its protagonists out riding among the stars in a chintzy spacecraft manufactured from egg cartons and silver paper (complete with furry dice on the dashboard and a nodding dog in the back). And what will we find out there? That’s right: Big paper mache monsters that look like bizarro universe Teletubbies, and plenty of big-busted babes just raring for a spot of ‘hide the salami’.

This film may not be 2001, but it’s certainly a space oddity. It opens with the two luscious heroines of the title (played by sassy New Yorkers Elizabeth Cayton and Cindy Beale – didn’t she use to be in Eastenders?) chained helplessly to the wall of a slave galley as an offering for a randy android. Fortunately the chains are made out of the same flimsy material as the script, and before you know it they’ve kicked their captors just below their Darth Vader lunchboxes and have made good their escape in a rickety spacecraft. ‘It says here we need a glove to start it’ says Cindy. ‘Well, look in the glove compartment’ says Liz. Brainpower is not this kid’s strong point – in fact she has to take her bra off to count to two.

Not long afterwards, their flying Kellogs box piles up on one of those remote planets at the far end of the galaxy that serves as a magnet for every low-on-fuel space wreck around. Having lost their bearings (and most of their clothes) in the prang-up, Cindy and Liz don fetching chamois leather bikinis and begin to explore this strange, extraterrestrial garden centre, stumbling across a mad hunter called Zed, and a plot that’s as old as 1932’s Most Dangerous Game. It’s all great fun in a daft way, and just the thing to put on when you invite a few mates back from the pub on a Friday night. If you want them to leave early, that is. 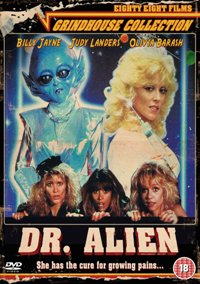 Sexy extraterrestrials are among us in the Troma release Dr Alien [buy HERE], which has bulbous-headed creatures grabbing hold of nerdish, sex-starved teen Billy Jacoby and giving him a big prick in the bum (no comments please) which causes this funny sort of penis thing to grow out of his head – a cosmetic addition that proves fatally attractive to all females who cross his path.

Before long, all the cracking crumpet on campus are tearing off their clothes and throwing themselves at Billy. But is our hero happy? Not a bit of it. He is, in fact, what we describe in the trade as ‘cream crackered’ or ‘completely shagged out and not at all ready for the libidinous attentions of Dr Alien herself (played by the gorgeous Judy Landers). The moral of this story is clear; if a big plonker grows out of your bonce then start wearing a hat, pronto! 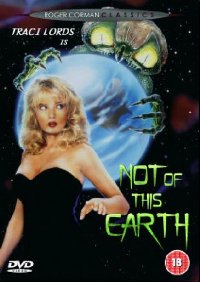 A more sinister extraterrestrial invasion can be seen in Not Of The Earth [buy HERE], a re-run of a 50s cheapie which features the lowest budget alien invasion in many a moon: just one guy in dark glasses and a 50s-style business suit who comes to earth to raid a few blood banks. This film is primarily of interest to film scholars because it stars a certain Miss Traci Lords, better known as the notorious hardcore porno star who rocked the industry in the late 80s with her confession that she was underage when she first started bonking on celluloid.

In fact the film was made as the result of a wager between the legendary producer Roger Corman and his youthful protégé, Jim Wynorski, that the latter couldn’t turn out a reasonable remake of Corman’s 50s quickie in a period of twelve days. Wynorski managed to do it, winning a brand new Porsche in the process. But it’s easy to see where the corners were cut: in one scene you can see the whole film crew reflected in the shiny surface of a sports car! It’s fun though, in a corny sort of way, and Traci does get to take her clothes off a few times. 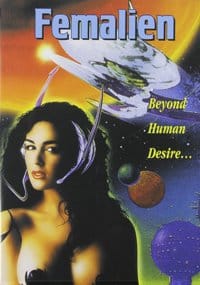 Other bad but sexy sci-fi spoofs well worth tracking down include Femalien [buy HERE], Bad Girls From Mars [buy HERE], Prison Planet, Space Sluts In The Slammer and the inevitable Beach Babes From Beyond Part 2. Perhaps we’ll return to this intriguing subject at a later date, but now we’ve run out of, er, space.

So as we boldly go off to seek out new civilisations, the questions we must ask ourselves are: Is there intelligent life out there? The late Patrick Moore insisted there was, and he should have known – he always looked like he’d come in from Saturn on the last shuttle. The answers lie in the future. In the meantime, just remember we are not alone. So lock the bathroom door.