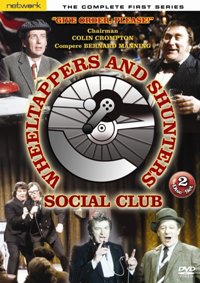 Sometimes when you look back at really bad old TV shows from the 1970s it’s hard to believe that millions of people once used to tune in to watch them on a regular basis. The fact that there were only three TV channels to choose from undoubtedly had a lot to do with this, but it’s still quite inexplicable that so many people would choose to spend their Saturday evenings pint in one hand, fag in the other, wallowing in the dubious pleasures of The Wheeltappers and Shunters Social Club.

Produced by Granada Television from 1974 to 1977, the series was set in a fictional working men’s club up North, with that most un-PC of comedians, the overweight, sleazy Bernard Manning, leering at the busty barmaid amid a blue haze of cigarette smoke while announcing a series of ever more awful “turns”. Manning’s fellow Comedians star Colin Crompton was the club chairman, ringing a fire bell every now and then and uttering spoof resolutions “On behalf of the Committeeeeeeeeee… I should like to tell you we made a mistake in offering the raffle prize of a diving suit. It is in fact a divan suite.”

According to Manning, Crompton had “less meat on him than Lester Piggott’s whip”. He certainly looked like he’d just given the undertakers the slip, but fitted right in with the rest of the punters, who were a remarkably unattractive bunch. The only sure way to tell the working men from the working women was the latter were drinking port and lemon instead of pints of Double Diamond.

As for the aforementioned “turns”, they were usually performers whose careers were in freefall, the likes of Bill Haley and the Comets, Kathy Kirby, Freddie Garrity (dressed as a chicken) and “Two Ton” Tessie O’Shea, who could always be relied upon to get a sing song going with “Knees Up Mother Brown.” Some of the imported acts who’d seen better days were clearly bewildered at finding themselves on a tiny stage performing for pissed punters munching on peanuts and pork scratchings. Their embarrassment was often compounded by the introductions they got. You could see that Gene Pitney wasn’t happy when Manning announced:  “It’s a good job he was nice to me on the way up because I’ve just met him on the way down.”

Mixed in with the more well known performers were the kind of acts that would have been buzzed off Britain’s Got Talent in five seconds flat, including a female Charlie Chaplin impersonator and glove puppets performing card tricks. There was also a bloke in a gold lame cowboy jacket playing tubular bells and a kettledrum, and some lunatic wrestling a discordant tune from glass bottles. Was there no care in the community back in those days? German Oompah Pah Pah bands and middle-aged pianists were also popular, and crowd participation was not so much encouraged as insisted upon, especially when Bernard launched into an old favourite like “Show Me The Way To Go Home.”

Most of the old Wheeltappers and Shunters shows are available on DVD from Network, but for sheer toe-curling awfulness I’d have to recommend you check out Series 5, containing an oily Patrick Mower hosting the Miss Nightclub 1977 beauty contest. This is not something to put on for feminists. The judges are Alvin Stardust, Corrie’s Bet Lynch and that, er, highly respected MP, Cyril Smith!

Yes, it was indeed another country.