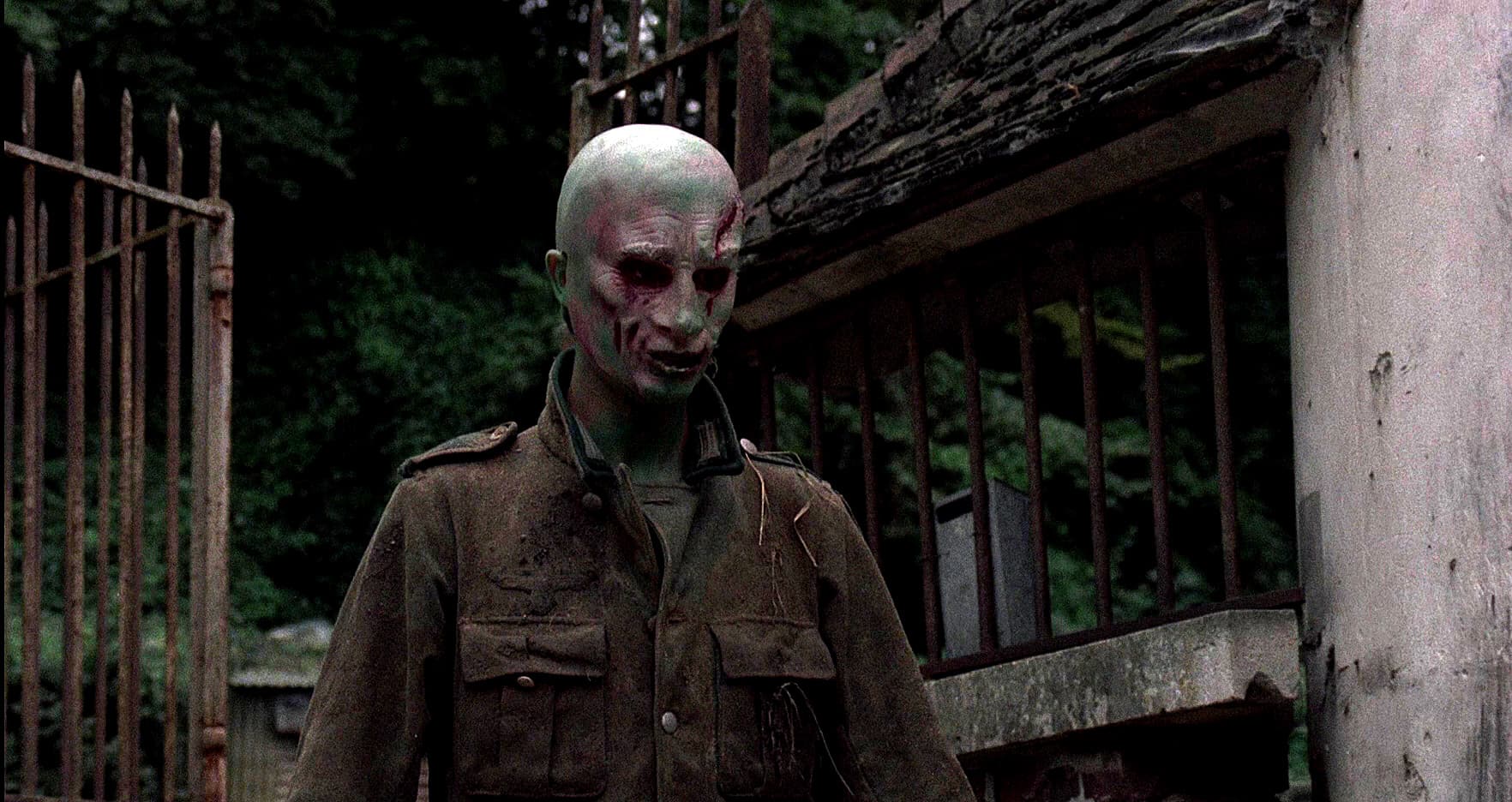 A zombie movie to avoid at all costs, this infamous cheapie was supposedly made for the sum of £100,000, though nude vampire specialist Rollin must have spent most of that money in the local pub – judging by the shaky nature of the camerawork and performances!

In fact Rollin only took on the movie after the prolific Jess Franco bowed out (the memorable score is by jazz musician Daniel White, a regular collaborator with Franco, and several Franco regulars can be found in the cast) and then for some inexplicable reason he used the pseudonym of A.J. Lazer. I say inexplicable because, though it’s pretty dire, the movie is certainly no worse than most of Rollin’s other movies, and I can’t see why he’d want to take his name off it.

The opening scene has echoes of Jaws as a pretty young girl goes for a swim in a tranquil lake near a tiny French village on a hot summer’s day. Little does she know that a troupe of Nazi soldiers were murdered and dumped there during the war. A hand breaks the surface, Deliverance-style, and a seedy-looking Nazi zombie appears to drag the girl down to her death. A little later one of the zombies ventures out of the lake to sink his teeth into the neck of another local girl, causing Mayor Howard Vernon to comment, “I’m a bit worried. I fear there’s a lot more to this than meets the eye…” It’s obvious that Vernon is harbouring a guilty secret, and he initially tries to put off a female reporter who comes to investigate the murders. Then he tells her about his days in the Resistance, and how he was involved in the slaughter of the German soldiers and the dumping of their bodies. Meanwhile, a bunch of kids in a camper van have also fallen victim to the underwater zombies, who seem to be getting bolder in their activities. When a couple of thick-headed cops arrive to question the locals they also get their throats bitten out and their bodies dragged back into the lake.

Then the zombies invade the village, stumbling upon a couple making love, and a half-naked woman in a bathtub. When they burst into the local pub and start turning over tables, it really is the last straw. “We’d better face the fact that the zombies have declared war,” sighs Vernon. “Anybody with a firearm better get ready!” But of course bullets prove useless against these supernatural characters, and in the end it is up to a youngster, the product of a Nazi’s affair with a local woman, to entice the zombies to a run-down mill where they are ambushed and burned out of existence with flame-throwers.

Rollin’s exploitation movie background ensures he includes plenty of shots from below the waterline depicting a zombie’s-eye view of some nude female swimmers. But the film also has the languorous pace of Rollin’s sexy vampire flicks, and is bound to come as a disappointment to those who like to see intestines being ripped out and eyeballs popped. Mind you, the zombies here are still quite fun in a creepy way. They trundle around in heavy green eye-shadow, with the same sort of glazed expression that those unlucky enough to sit through the film will soon be wearing. The only pleasant diversion is spotting the continuity errors, of which there are many. For example, we see the Nazi soldiers having their boots removed before the bodies are thrown in the lake, but later on the zombies have them back on! Another well-documented tale about the making of this is that Rollin discovered the camera was running too fast, so he asked his actors to act in slow motion to compensate, which probably explains a lot…